Learn Real Life English and Laugh! Posted by Adir on Mar 12, 2013 in Intermediário

If you want to speak English like a native speaker, YouTube videos are a great resource. They are funny and they can give an insight into another culture. But these viral videos can be difficult to understand because of the variety of slang and expressions used, and few of them have subtitles.

I’m here to help! We’re going to take apart a popular American YouTube video so that you understand it in its entirety. You’ll learn a bunch of new vocabulary and expressions. Most importantly you’ll hear how Americans speak in real life. Not scripted like the CDs and videos in your English class. So let’s learn some English and have some laughs!

Today’s video is from a series on YouTube called My Drunk Kitchen from Hannah “Harto” Hart. First let’s learn a little bit more about Hannah:

Hannah became famous in 2011 when she made her first “My Drunk Kitchen” video. She was talking to a friend over Skype, who told her that she’d love Hannah to cook something. She was drinking wine and made a grilled cheese (a popular sandwich in the United States that involves cooking cheese between two buttered pieces of toast). Her friend recommended that she upload the video to YouTube to share with their other friends.

My Drunk Kitchen went viral (became very popular) and gained over three million views in just a few months. Ever since, she’s been making weekly My Drunk Kitchen videos in which she cooks while intoxicated.

Hannah learned Japanese in college. She also has a personal YouTube channel called YourHarto where she comments on various subjects. In April she will begin an international comedy tour in the United States, Canada, and Australia.

A Cultural Note on Drinking Culture in the United States

In the United States, it is popular to drink alcohol at parties or while hanging out with friends. It is not considered normal to drink alone, as Hannah does in her videos, because this is seen as alcoholism. But in Hannah’s case, it is for entertainment, so she probably would not be considered an alcoholic. If you are offended by drinking, then you may not enjoy this video.

Now let’s watch the video once before going into the difficult vocabulary. See how much you can understand the first time through.

Now that you’ve got some sort of idea about the video, let’s try to understand it better. First, let’s go over the vocabulary that you will need to know.

Burrito – a Mexican-American dish that usually has beans, cheese, and meat wrapped up together.

Crawl – To move close to the ground on hand and knees.

To cut to (something) – In a video when you show a picture or a scene explaining something that was just said. The show Family Guy is famous for doing this a lot.

Fucker – Short for motherfucker. See our article on the word fuck .

To drink (someone) under the table – To be able to drink much more alcohol than someone else. To drink until the other person literally falls under the table from drinking too much.

Jargaritas– A word Hannah has made up. A mix of margarita (a typical Mexican drink with lime juice, tequila, and orange liquor) and jar (a glass cup generally used for storage).

Nachos – another type of Mexican food with tortilla chips, beans, meet, avocado, and other toppings.

To put the … in … – This is formed by taking a part of the second word and using it as the first word. This means that someone has the essence of part of that word. For example, someone with big feet who is a good football player could say, “I put the foot in football.”

A shit ton of (something) – A very large amount of.

Shot – A shot is a dose of alcohol.

Siracha and Worcestershire sauce– From Thailand and England respectively, they are two popular sauces found in any supermarket in the United States.

Tacos– Like burritos, but consumed in a hard shell.

Now that you should be able to understand a lot more of the vocabulary that Hannah uses. So, let’s watch the video again, but this time, follow along with the transcript and notes below. You’ll learn some new things about American cultures and a lot more about speaking like a native!
Here we go:
My Drunk Kitchen, Ep. 7: Tacos 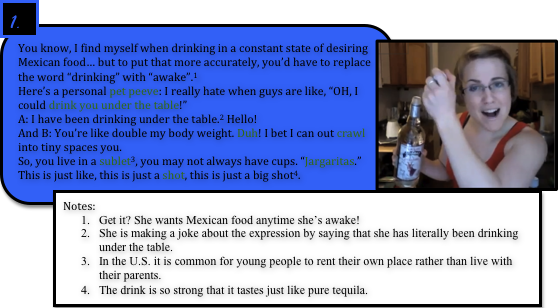 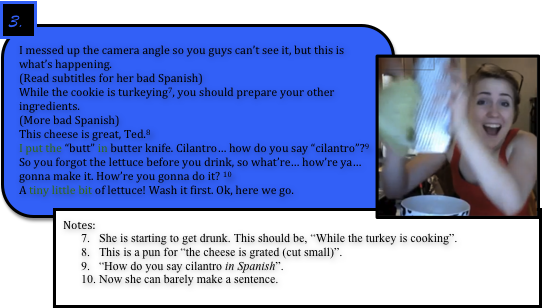 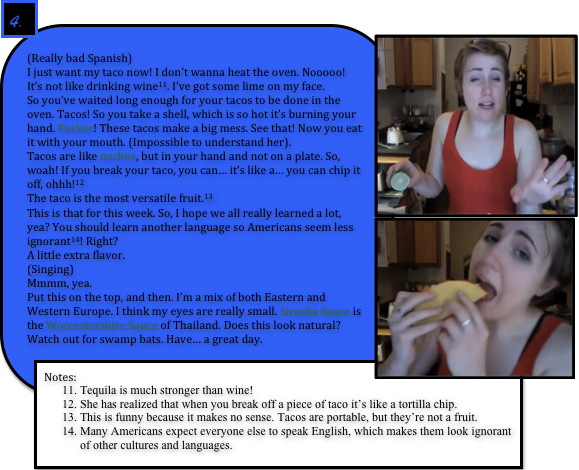 Notice how much Harto uses the word like. Americans (especially Californians) use this word all the time without any meaning. It just takes up space in the sentence. If you want to speak English like an American, then master the word like!

It’s important to find ways to incorporate English learning into your everyday life. You can watch videos on YouTube, listen to RLE podcasts, read a book, or watch popular TV shows. With these tools, your ability to understand English and speak like a native will greatly increase.

When you have fun learning English, it makes the process so much easier. So, find entertaining ways like this to improve your English!
If you enjoyed this article, then please comment below or on facebook and we’ll keep making more of these YouTube guides.

If you haven’t already, join the RLE Community. It’s a great way to incorporate English into something you already do and to meet and communicate with more than 4,000 people from over 50 countries. It’s time to make it your goal to speak exceptional English! 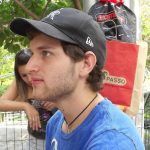 Ethan came to Belo Horizonte, Brazil in 2012 after graduating from the University of Colorado with a degree in International Affairs. He has previously lived in Germany and Spain. His favorite things to do when he has some freetime and money is travelling, learning new languages and rock climbing

Keep learning Inglês with us!

About the Author: Adir

English / Spanish teacher and translator for over 20 years. I have been blogging since 2007 and I am also a professional singer in my spare time.