A Follow-up to the Irish Vocab for the Parts of a Fiddle Bow: Barr Bogha Fidil Ollmhór Déanta as Cloch le “Roc-Cheol na bhFathach” a Sheinm nó Stua Mara Nádúrtha? Posted by róislín on Apr 22, 2018 in Irish Language 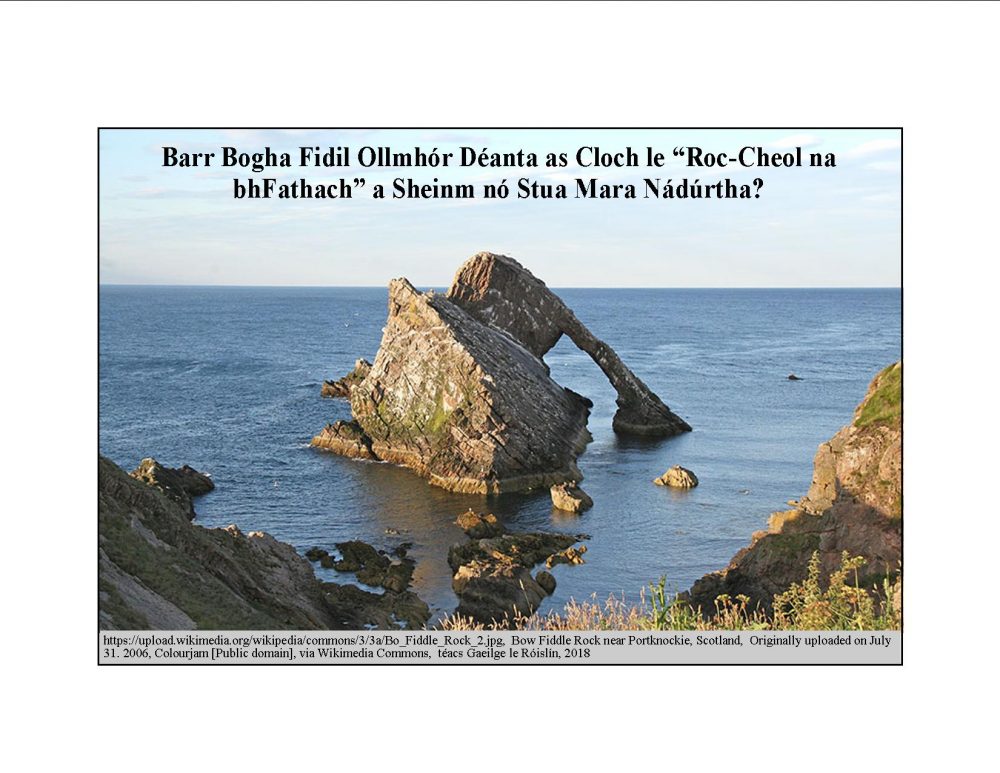 Before we take a break from talking about music (“ceol“), and specifically fiddles (“fidleacha“) and fiddle bows (“boghanna fidle“), I couldn’t resist adding one more picture for the “téama ceoil.”  As you can see in the graphic above, the rock formation off the coast of Scotland isn’t simply a “gnáthstua mara,” but looks amazingly like the tip (“barr“) of a fiddle bow (bogha fidle).

That more or less answers the question posed in the title I added to the graphic above:  Barr Bogha Fidil Ollmhór Déanta as Cloch le “Roc-Cheol na bhFathach” a Sheinm nó Stua Mara Nádúrtha?   (Is It) The Tip of a Giant Fiddle Made of Stone for the Purpose of Playing the “Rock Music” of the Giants or a Natural Sea Arch?  I’m sure you figured out the answer (“an freagra“).

But it does suggest an interesting, if unlikely, idea.  Perhaps the giant or giants (“an fathach nó na fathaigh“) who, according to folklore, “built” the “Giant’s Causeway” in Northern Ireland splashed their way over to Scotland, accompanied by the sound a fiddle-player, and then trekked across the Highlands to the NE Scottish coast to Portknockie.   Then their pathway in the Antrim area became submerged in Irish Sea, and somehow, so did the fiddle, in the waters off the Scottish coast.   Improbable?  Well, you never know.  And of course we’ll never really know if some possible stone giants actually liked rock music.  B’fhéidir é!

Just to add to the intrigue, the Giant’s Causeway has two names in Irish, “Clochán an Aifir” and “Clochán na bhFomhórach.”  An bhfuil ainm Gaeilge nó ainm Ghaeilge na hAlban ar “Bow Fiddle Rock”?  In Irish, it could be “Cloch Bhogha Fidle,” but I’m not sure if anyone has actually used that.

Actually, thinking about it all linguistically, “causeway” is typically “cabhsa” or “tóchar” in Irish, not “clochán” and the Fomorians (Fomhóraigh) weren’t necessarily giants (fathaigh), but, as the saying goes, “They Might Be Giants.”  So that brings us full circle, sort of, to the stone-like “Sleepers” in C.S. Lewis’s The Voyage of the Dawn Treader, which prompted one of the Narnia troupe to comment, “They might be giants.”  But sleepers, Fomorians, giants, and causeways, will have to wait for another blogpost.

BTW, for a completely different interpretation of the shape of the stone arch, how about we say it’s E.T.’s head, skinny neck, and narrow shoulders.  Given how many rock formations have been whimsically interpreted, why not?  But actually, I love the idea that it’s a fiddle bow tip — now if I could only link it geographically to Fiddlers Elbow, we could almost be ready to rosin up the bow!

BTW2, few, if any, of the places I looked at for Fiddlers Elbow seem to use the apostrophe, so we don’t know if it’s one fiddler or more than one.  C’est la vie and the same thing that I believe has happened to “Kings Crossing” (formerly “King’s Crossing”).  So can I now say, “Cest la vie”?   Anyway, SGF — Róislín