Can A Word Look Irish But Not Be Irish?   The Curious Case of … (Léigh leat le fáil amach) Posted by róislín on Apr 25, 2018 in Irish Language 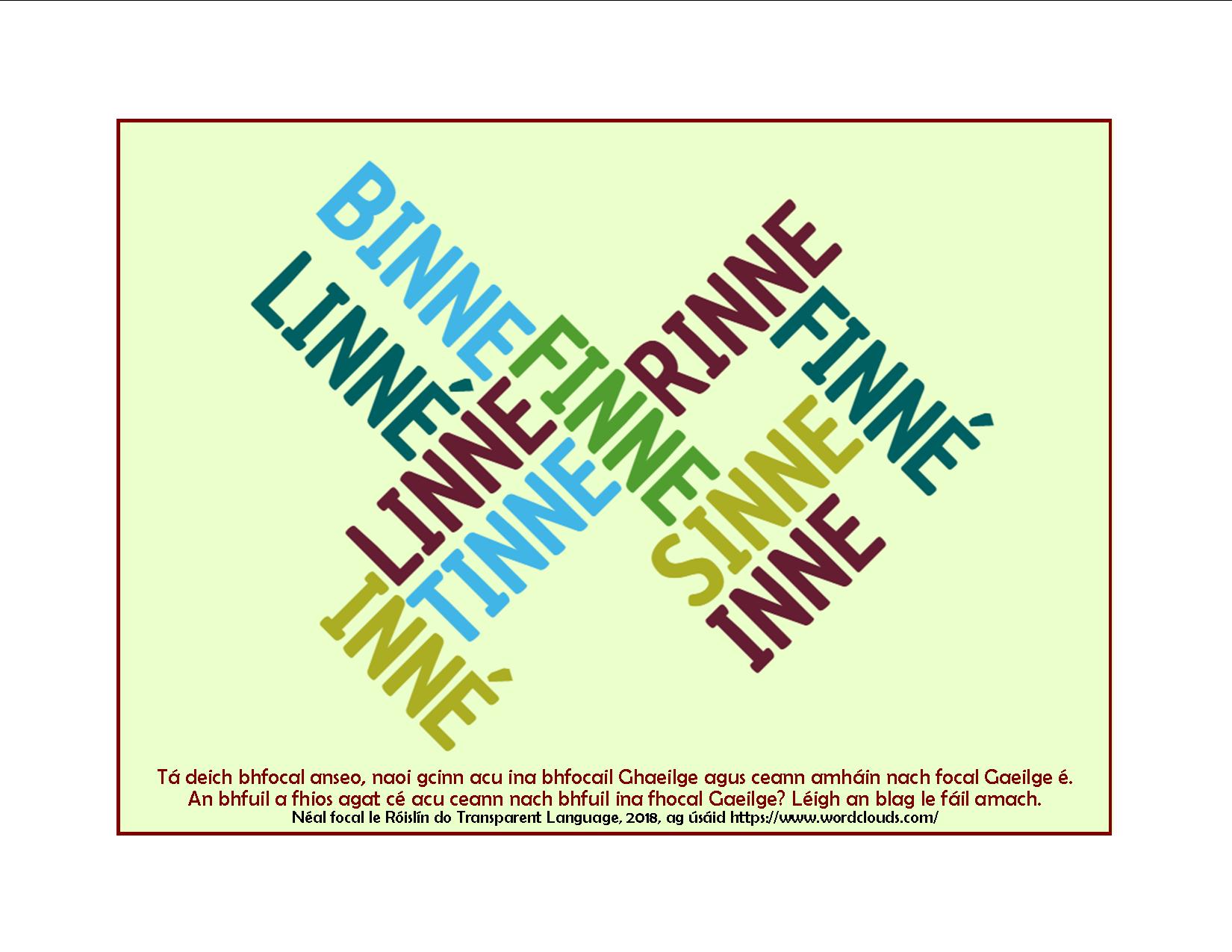 As you can see in the graphic above, Irish has a number of words that end in “-inne.”  And to add to the mix, the ending “-inné” does exist but is much less common.  The ten words above end in either “-inne” or “-inné,” but one of them isn’t actually Irish.  So, looking at the ten words in the word cloud, can you pick out the one word that may look Irish, but isn’t?

Leid mhór: although the word in question isn’t technically Irish, I found it in an Irish-language terminology dictionary.  That’s what made it catch my attention.  It was listed because it is a proper noun that might be used in an Irish sentence.  But actually, it could be used in a sentence in any language.

Whether you’ve figured it out yet, or not, it should prove interesting to go down the list and see what all these words mean.  As you work your way down, the list, you’ll see which word looks sort of Irish, but isn’t really Irish.  The rest are all typical Irish words, although some, admittedly, are not very commonly used (at least in my experience).

inne: well, no, it’s not a typo for “inné,” which is the next word down.  “Inne” means “bowel” or “viscera,” a cheery way to start our list.  For me, this word is in the “passive vocabulary” category — I doubt I’ve ever used it in an ordinary conversation

inné: yesterday.  One of the first words most learners learn and eminently useful.  Sometimes, though rarely today, spelled “indé,” showing a connection to the “dé” of “Dé Luain, Dé Máirt, srl.” (Monday, Tuesday, etc.).  That, at least, explains the “é” ending, which is pretty rare in Irish words.

finne: from the adjective “fionn” (white, pale, fair, blond, as in “Bealach na Bó Finne,” the Irish phrase for “The Milky Way,” lit. the path of the white cow)

finne, whiteness, paleness, fairness – in complexion, blondness; the abstract noun based on the adjective “fionn”

finné: witness.  This word has always caught my attention because it seems unusual to have the final “é” ending in an Irish word.  There is a theory that it may come from “Dé” but I don’t think it’s provable.  At any rate, “finné” is a perfectly serviceable word for its purpose, but probably not nearly so widely used as most of the words below.

sinne: we, us (contrast or emphatic form of “sinn“)

binne: of an antler or horn, from “beann” (horn, antler), as in “méid na binne” (the size of the antler)

binne: from “binn” (pl. beanna), gable end of a building, as in “balla binne,” a gable wall.  Also means a “peak” if discussing mountains, as in the place name, “Bruach na Binne” (Broaghnabinnia, one of the Dunkerron Mountains in Co. Kerry), which means “the verge of the peak.”  This place name is the subject of a brief but interesting discussion in Paul Tempan’s “Irish Hill and Mountain Names” (nasc thíos), complete with a saga of presumably misinformed sappers.  Shades of Brian Friel’s Translations?

binne: from the noun “beann” (regard, dependence), which I’d put in the “passive vocabulary” category

tinne, ingot.  But note we can also (more typically, I think) say “uinge” for “ingot,” as in “uingí don teilgcheárta,” which means “ingots for forging,” lit. “ingots for the foundry.” But wait, there’s more.  “Uinge” is also a literary word for “ounce.”  But, in that regard, note that the more ordinary word for “ounce” these days is “unsa.”  And “barra” (a bar) can be used for in ingot of silver or gold.  And we go round and round and round in the vocabulary circle game!  I can’t I’ve ever heard “tinne” in any ordinary, real-life conversation.  And, of course, it’s completely different from “tine” (fire), a very widely used word.

tinne: admittedly on the obscure/historic side, “tinne” is also the name of the letter “t” in the ogham alphabet, but I do sort of separate that from modern, everyday, useful vocabulary!  “Tinne” apparently  means “holly” according to the ancient ogham alphabet (mostly used before the introduction of Latin writing to Ireland), but all I can say in that regard is that the ordinary modern word for “holly” is “cuileann,” with “crann cuilinn” for “holly tree.”  If any of you find this “tinne” used in a modern botanical context, please write in and let us know.

rinne: made, did (the past tense of “déan,” make, do; it’s an irregular verb so it’s not surprising that the past tense looks nothing like the root “déan,” which, however, is used to make the present and future tense forms “déanaim” and “déanfaidh“)

Rinne: “of ‘An Rinn,'” a place name, as in An Rinn, Co. Waterford, and also found in counties such as  Galway, Laois, Mayo, and Sligo.  Ex. “muintir na Rinne,” the people of Ring, Co. Waterford, or of any of the other places called “An Rinn,” with “na Rinne” as the possessive.

linne: with us, an emphatic or contrastive form of “linn” (with us), from the preposition “le” (with)

linne: of a period of time, from “linn” (a period of time), as in “ceannairí na linne seo” (the leaders of this time period) or “cúrsaí na linne” (contemporary affairs/matters)

Linné: an alternate form of the name Linnaeus (Carl Linnaeus, the botanist/zoologist), and, as you’ve no doubt, guessed by now, the non-Irish word on the list.  It was seeing this as an entry in tearma.ie that prompted me to put this blogpost together.  Admittedly, afaik, “Linné” only fully resembles two Irish words (with “-inn” + “é”), but still I thought it was worth a gander.  Or in deference to the Linnaean system, should I say, worth an “Anser cygnoides domesticus (masculinus)“?  That is, if ganders actually have anything to do with being “worth a gander.”  Note to self: traditional expressions in English or Irish involving geese and ganders, future blog topic.

Anyway, that just about wraps it up, but one final disclaimer:  I’ve deliberately left three categories of  “-inne” words off of this list:

1)) longer words like “muidinne” and “inchinne” and phrases like “na hamharclainne” and “quiche cainninne,” even though they do end in “-inne.”  Maybe sometime in the future, we can explore further the “-inne” sound at the end of longer words like those.  And that would be a good project since “-(la)inne” is the ending for saying “of” a whole slew of words that normally ending in “-lann (bialann, restaurant, bialainne, of a restaurant; clann, clainne; amharclann, amharclainne, srl.).

2))  words like “duine” or “(is) sine,” since they have a single “n” and are pronounced very slightly differently.

3)) words that introduce additional vowels (cruinne, bainne, gráinne, éinne), which would make the list way longer and would, in some cases, introduce different vowel sounds.

What I really wanted to do here was highlight was how “Linné” could almost pose, chameleon-like, as an Irish word, given the existence of “inné,” and “finné, and “linne.”  And given the fact that it is in an Irish dictionary!  On the way, we’ve looked at more than a baker’s dozen of similar-sounding words, some everyday, some a bit off the beaten track.  I hope you found this presentation and bit of a word game both fun and informative, and maybe picked up a few new words from it.  SGF – Róislín