A Short Glossary for the Irish Rap Song “C.E.A.R.T.A” by Kneecap (Rapcheol Gaeilge) [Cuid/Pt.1] Posted by róislín on Jan 7, 2018 in Irish Language 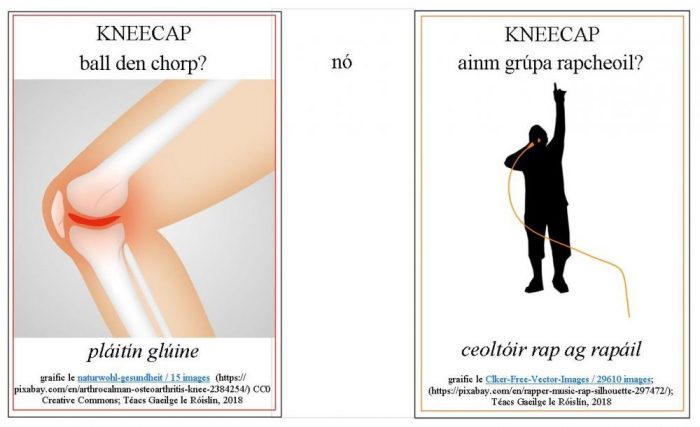 Published on YouTube on December 15, 2017, the rap song “C.E.A.R.T.A”  (nasc thíos) has been sweeping through the “cibearGhaeltacht“.  Most of the comments I’ve seen are wildly favorable, with a few spoilsports badmouthing the song entirely.

I followed one link for the lyrics, but it was a dead link.  So I was getting ready to work on transcribing the words, when I finally found them in the publication Nós (nasc thíos).  I’ve picked out a few interesting vocabulary words for this glossary.  Not, BTW, the Irish versions of the “f” word, which are clear enough in their meaning, whatever the spelling.  Also, I’ve added stanza numbers.

Véarsa 1) go bhfaighidh, a lovely irregular verb (from “faigh” get), future tense, dependent form, with the whole “bhfaighidh” sound basically reduced to one syllable, like “wee” or “why,” depending on your dialect.  So what does it mean, after all that?  “Seans ar bith go bhfaighidh siad” means “no chance that they will get”

Véarsa 2) ar bís, in suspense, on tenterhooks, the latter being an interesting English idiom, in and of itself, dating back to the early days of the woollen industry.  “Tenterhooks” were hooks for stretching woollen cloth on a frame while it dried after being washed or soaked for softening.  Definitely painful-sounding for a person, although Doctor Who‘s Lady Cassandra didn’t seem to mind!  Remember her?  If not, there’s a link below.   Word for word, “ar bís” means “on a vice (grip)” or “on a spiral,” but I think the idea is more like being “in a vice grip” or (somehow), “in a spiral.”  That “vice grip” in US English is a “vise grip.”  Normally, for something spiral-shaped, I’d use “caisirnín,” but we do have “staighre bíse” (a spiral staircase).

Véarsa 2) snaois, well, normally it means “snuff — sin an méid a déarfaidh mé.  It’s a feminine noun, so “the snuff” is “an tsnaois” [say: un tneesh, the 1st s is silent] and “of the snuff” would be “na snaoise” (dath na snaoise, the color of the snuff)

Véarsa 2) “ket,” not Irish, of course, but English slang, and, well, all I need to say here I guess is that this isn’t “ket” as in the Northern English dialect word “ket” meaning “sweets” (candy).  Duine ar bith agaibh anseo a deir “ket” do “mhilseáin” nó do chandaí?

Véarsa 2) cíos, rent, i.e. the rent money.  Hmm, I think we have a variation of the “I drank my rent money” trope here, although this time it’s not “piontaí leanna” as in the song “Níl sé ‘na lá.”  Remember, the speaker in that song says, “Nach mise féin an fear gan chéill a d’fhág mo chíos i mo scornaigh?”  Wondering about “gan chéill” or “scornaigh“?  They’re old dative-case forms, meaning “gan chiall” (foolish, without sense) and “scornach” (throat).

Regarding the title of the song, there’s an interesting pronunciation point involved.  The word “ceart” (“right”, as a noun, as in “cearta sibhialta” or adjective, as in “freagra ceart“) is probably quite well known.  But there is one point that American learners of Irish may need to keep in mind.  For the song’s rhyme scheme, the pronunciation of “C.E.A.R.T.A” is like “see-ee-ah-ahr-tee-ah,” not the sound “ay” as in “hay” or “may” that most Americans would use for the letter “A.”   The spelled-out word “C.E.A.R.T.A.” rhymes loosely with “garda” in the song, so obviously the “ay” sound wouldn’t work.  And BTW, even though it’s probably clear, I’m using “ay” here as a rough guide, like “hay,” “may” (or “May”), or “say,” not like the “eye/I/my” sound of “Aye” as in “Aye, aye, sir!” or “Och, aye!”

Bhuel, it looks like this post will be a two- or three-parter, since we’re out of space for now.  But before I close, just a note about the graphic above.  Since the duo is called “Kneecap,” I thought it might be interesting to include the Irish word for that part of the body.  It’s “pláitín glúine,” lit. “patella/little plate of knee.”  And as a verb (to kneecap someone), it’s “lámhach sa ghlúin,” lit. “shooting in the knee.”  The word “pláitín” is also used for “platelet” in discussing blood (pláitín fola).  As for “rap music,” the word “rap” stays the same in Irish, giving us “rapcheol” (rap music), rapcheoil (of rap music), ceoltóir rap (rapper), ag rapáil (rapping).

nasc do “Lady Cassandra”: http://tardis.wikia.com/wiki/Cassandra_O%27Brien.%CE%9417.  She (formerly he) was portrayed a living face stretched flat onto a square frame.  Hmm, I wonder if she ever said she was “on tenterhooks.”