Irish ‘Fill in the Blanks’ for ‘The Twelve Days of Christmas’ (Dhá Lá Dhéag na Nollag) (cuid/part 2 of 2) Posted by róislín on Dec 31, 2017 in Irish Language 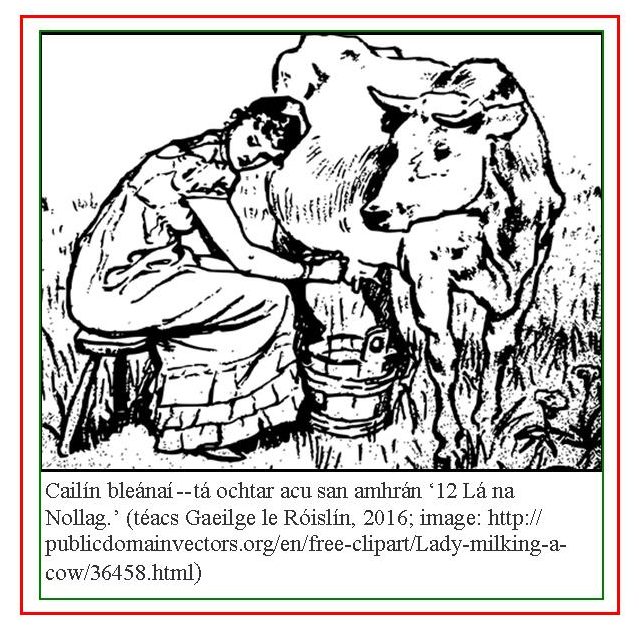 Now that we’ve practiced filling in the blanks for the first six lines of the “Dhá Lá Dhéag na Nollag” (The Twelve Days of Christmas), let’s try the last six.  As before, each phrase has just the right number of blank spaces for the intended word, including a space for any punctuation marks needed (Leid! Leid!), so that will give you roinnt leideanna.  The freagraí, as usual, are thíos.  For more leideanna, you can check the previous blogposts in which the song “Dhá Lá Dhéag na Nollag” was discussed.  Heads up — there are sé iarbhlagmhír déag (16) on this topic!

Today’s post will only deal with the last six lines of the “Twelve Days.”  The first six were done in the most recent blogpost (nasc thíos, blagmhír 28 Mí na Nollag 2017).

As in the previous blogpost, the answer key will include a few pronunciation tips and a brief note explaining the structure involved for each answer.

And once again, In the interests of space, I won’t try to write out each line fully, but just the key points.  For the middle “chunk” of each line, I’ve seen at least two versions (thug mo leannán dom OR thug mo rúnach dom, and of course, the “dom” could be “dhom” or “domh,” depending on dialect — ach sin ábhar blag eile).  So I won’t include the middle part, just the day (an seachtú, srl.) and the key word (like “ag snámh” or “bleánaí” from the previous post).

7..seacht n-eala ag snámh, For “swan,” “eala” is the singular form, which is usually used after numbers in Irish, as we’ve discussed before.  The plural is “ealaí,” but that’s not used here.  The “n-” is because we have the process of “urú” (eclipsis), which “covers” the original vowel sound with an “n-.”  The fleiscín (hyphen) shows that the “n” is not part of the original word.

8.. ochtar cailíní bleánaí (or “ag bleán“) There are various interpretations of what should come after the personal numbers.  Personal numbers are used for counting people, e.g. “beirt” (two people), triúr (three people), etc.  But I like to follow the established pattern of “beirt mhac” (two sons) and “triúr ban” (three women), which both use the genitive plural after the personal number.  So, ochtar cailíní (not just “ocht” and not just “cailín,” at least in my experience).  It’s a bit like saying “an octet of girls.”  As far as I can tell, Irish doesn’t have a one-word term for milkmaid, and there’s nothing particularly “maid” about it — it’s just “girl milking” or “girl of milking,” if you take it literally.

9.. naonúr ban ag damhsa.  Remember: “ban” means “of women,” so this phrase is close to saying “a nonet of women,” although the English word “nonet” is mostly limited to describing musical groups.  Pronunciation: don’t be misled by the English word “ban” — the Irish one rhymes with, hmm, well, “con” (as in “con artist”), I guess “Flin-Flon” (the town in Manitoba), Tron (the movie), and Autobahn.

10.. deichniúr tiarnaí ag léimneach  (or “ag léim” or “ag léimnigh“).  Pretty straightforward, since “tiarnaí” (lords) and tiarnaí” (of lords) are spelled the same.  So it’s like saying a “dectet of lords,” not that I’ve ever really used the word “dectet” in real life.  Sounds like it could be fun for an Enid Blyton parody though.  Enid Blyton (1897-1968) gave us the “Famous Five” and the “Secret Seven.”  How about the “Decadent Dectet”?  That would be a nice parallel to the new spoof Ladybird Books, like The Ladybird Book of Red Tape or The Ladybird Book of the Zombie Apocalypse (marketed to adults, of course).  Actually, I grew up loving the adventurous characters in Enid Blyton’s books, but yeah, I have to admit they were pretty formulaic.  And I’d have to say the same about Nancy Drew, the Hardy Boys, Tom Swift, the Happy Hollisters, the Bobbsey Twins, and even, delving into the older syndicated series, Frank Merriwell, the Motor Maids (whose series lasted from 1911 to 1914), and virtually anything by Horatio Alger.

Do I digress, well, yes, I guess, but all in the name of teaching vocabulary.  Remember it was translating “deichniúr” that started all that.  “Dectet,” indeed!  Oh, yeah, “dectet” is really mostly for musicians, but for “duo” and “trio, at least, the musical terms are pretty well generalized in English (Dynamic Duo, the Ghostly Trio, which was Casper et al., or the Trio from Buffy).  I feel like there should be some non-musical quartet out there, but I can’t think of anything except the Fantastic Four and the Fearsome Foursome.  And, of course, many groups of four are described as “quartets,” like the animated characters in Pig Goat Banana Cricket, but I was trying to think of a non-musical foursome that’s actually called a quartet.  Oh well.  Suffice it to say that Irish has special words for groups of people from two to ten and for groups of twelve (but not eleven).  Furthermore, it has a whole separate set of words for groups of musicians, from “dísreach” to “naoiréad” but I haven’t found dectet, hendectet, or duodecet, yet.

11.. aon phíobaire dhéag ag píobaireacht (or just “ag seinm,” which is shorter and easier to sing).  As just mentioned in the answer to no. 10, there’s no special word in Irish for groups of eleven people, so no “hendectets” (or “undectets”), AFAIK.  So we can just say that we start with “aon” (one), insert the type of person, leniting it where possible (píobaire becomes phíobaire), keeping it singular, and, if the noun ends in a vowel, add “dhéag” or if the noun ends in a consonant, add “déag” (aon mhúinteoir déag).  If it’s raining and Tuesday, we start all over … nah, just “ag magadh” there.  But sometimes Irish language rules do seem incredibly complicated, with some of the steps depending on how the word involved happens to be spelled (what initial consonant, what final consonant, etc.).

12.. dháréag drumadóirí ag drumadóireacht.  “Dháréag” is the special word for “12 people” in Irish and is derived from “dhá” +  “fhear” + dhéag.”  “Drumadóir” is pretty self-explanatory, “druma” plus and “agent” or “occupational” suffix (-óir).  Pronunciation: remember that “drum-” in Irish isn’t quite like the English “drum.”  The vowel “u” in the Irish is more like the English “put” while in English, “drum” and “to putt” have the same vowel sound (remember, in English, “put” and “putt” sound different).  I mo chuid Béarlasa, ar a laghad.

Bhuel, if you’ve made it this far, comhghairdeas, and I hope you enjoyed it!

2015: The Irish Twelve Days of Christmas Redux Redux with a Blogliography of Other Blogs on the Song Posted by róislín on Dec 25, 2015 in Irish Language

Irish ‘Fill in the Blanks’ for ‘The Twelve Days of Christmas’ (Dhá Lá Dhéag na Nollag) (cuid/part 1 of 2) Posted by róislín on Dec 28, 2017 in Irish Language