Speaking of Pigeons (Colúir) Posted by róislín on Dec 14, 2013 in Irish Language 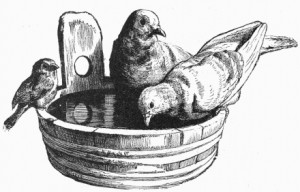 Pigeons in a Piggin! (for which the Irish is not quite so alliterative but is nevertheless informative: Colúir i Mornán. A ‘mornán’ or ‘piggin’ is a type of pail with an upright stave instead of a traditional handle. An bhfaca tú mornán riamh?  I’m not sure what the smaller bird is — barúil ar bith agatsa?

I’ll leave journalists Sean Dunne (IrishCentral) and Liz Alderman (New York Times) to “squabble” over the accuracy of the recent reference in the New York Times to “pigeon-eating” in Ireland.  But it does seem to me like a good opportunity to explore the related Irish vocabulary (naisc do na hailt thíos).  So we’ll look at the Irish words for “pigeon,” “dove,” and yes, “squab.”

The topic is particularly intriguing (domsa, ar a laghad) because of the linguistic distinctions between pigeons and doves … or the lack thereof.

In a nutshell, the Irish word “colm” [say: KOL-um, two syllables, like English “column”] means both “dove” and “pigeon,” but usually implies “dove.”  It is perhaps best known in the Irish context as part of the name of St. Columba (“Colm Cille,” dove of the church, in Irish).  The Irish word “colúr,” in contrast, is usually translated as “pigeon” but is sometimes translated as “dove.”

I suppose the ultimate connection is found in the two Irish words for “rock-dove”: colm aille and colúr aille.   Of course, that’s literally “cliff-dove/pigeon,” apparently named for its practice of nesting in nooks and crannies in cliffs, instead of making traditional nests.  The rock-doves have adapted this practice to skyscrapers as well, and the urban rock-dove figures metaphorically in Marie Jones’s aptly named 2010 play, Rock Doves (http://www.nytimes.com/2007/09/18/theater/reviews/18rock.html).  Jones may be more familiar to readers from her Broadway/West End hit, Stones in his Pockets, which, btw, is soon to be a movie, starring Boyzone singer Ronan Keating and Game of Thrones‘ Conleth Hill (http://www.belfasttelegraph.co.uk/entertainment/film-tv/news/stones-in-his-pockets-rolling-on-to-a-big-screen-near-you-29562851.html).  That should be interesting — scannán bunaithe ar dhráma atá bunaithe ar scannán bréige atá bunaithe, ar bhealach, ar dhearbhscannán (.i. The Quiet Man).

The word “colm” is related to the Latin “columba” (dove, pigeon) which provides us with a slew of spin-off words and place names in English and other languages: columbine, columbarium, Columbia, Colombia, Columbus, and Columba, the constellation.  In Irish, related words include:

lus an choilm, columbine, lit. the plant of the dove

“Passenger Pigeons” were also known in English as “Wood Pigeons” and “Wild Pigeons.”  If the North American and European meanings are the same, then “colm coille” would also mean “passenger pigeon.”  “Colm coille,” lit. “dove/pigeon of the forest” is also used for “ring-dove” and “wood-pigeon.”  Dove … pigeon … mh’anam.  Bottom line, though — note the importance of the “broad c” and “slender c” pronunciations in distinguishing “colm” of the “church” (Colm Cille) from “colm” of the woods” (colm coille).

Going farther afield, we also have ”colúr” used for at least one sea-bird, “colúr toinne” (black guillemot, lit. “pigeon of the wave”).

As for “stool-pigeon,” there is an Irish expression that also includes “pigeon,” somewhat unusual when translating idioms.  In Irish a “colúr cluana” is literally a “pigeon of deception” (cf. lacha cluana, decoy-duck)  But the “stool-pigeon” as a person is more typically “maide bréagach” (trap-stick, lit. false stick).

There are two ways to say “clay pigeon,” one with the word “pigeon” embedded (crécholúr) and the other without (créphláta, lit. clay-plate).

“Pigeonhole” (small compartment in a desk, etc.) in Irish doesn’t refer to pigeons at all.  It is simply “poll clóiséidín” (little cabinet hole).

The “turtledove” has a unique name in Irish, “fearán,” with no reference to “coilm” or “colúir,” or for that matter, “turtair.”  But then turtledoves don’t have anything to do with turtles either; they’re simply called that because of onamataipé  since the cooing noise they make that sounds like “turrr-turrr”.  You might remember some discussion of this from the “Dhá Lá Dhéag na Nollag” blogs of 2010 (https://blogs.transparent.com/irish/dha-la-dheag-na-nollag-the-twelve-days-of-christmas/)

And a final item of lexicographical interest.  I’m still pondering the Irish for “pigeon flute,” being fascinated by this musical instrument since I was a teenager, when, at some used book sale, I stumbled upon the an unusual pamphlet published in 1938, “Peking Pigeons and Pigeon-Flutes: A Lecture Delivered at the College of Chinese Studies.” It was written by the intriguingly named “Harned Pettus Hoose.”  I imagine “fliúit cholúir” would do the trick, but would welcome other suggestions.  If it’s considered more a whistle than a flute, it could be a “feadóg cholúir.”  And if pigeon-flutes have really piqued your interest, you might want to check out http://www.windmusik.com/html/pigflut.htm or the English version http://www.windmusik.com/html/pigflut.htm#Carried.  The small clay flutes are fastened to the pigeon (!) and as the pigeon flies, the air goes through the flute and makes a musical or whistling sound.  To which I can only add, who’duh thunk it.

As for “squab,” I’d say the word is more straightforward in Irish than in English.  It’s ”éan coilm” or “éan colúir.”  While “éan” basically means “bird,” it is also used to indicate the young of various bird species, sort of comparable to “chick” in English.  Getting back to the culinary aspect of this blog, it’s interesting that “squab” has that sort of elite-vocabulary gourmet-terminology je ne sais quoi about it and apparently, as dinner, commands high prices in upscale restaurants.  But I don’t personally think seeing “éan coilm” on a biachlár in Irish would appeal to me.  Visions of too much éiníní cuteness.  But eating pigeon, as cited in the New York Times article, certainly raised a ruckus that I believe is still going on.  And so far no one, as far as I can tell, is eating crow about it.  But that idiom will have to wait for blag éigin eile.  Slán go fóill, Róislín