A few more cat terms have recently come to my attention.  Let’s start with the rather eye-catching: 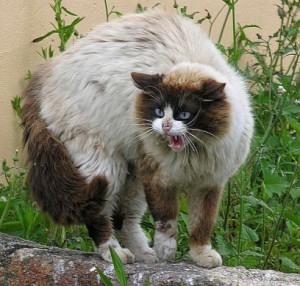 Ar dtús báire, ní peata “Leamhanfhir” é.  Nó “peata Fhear an Leamhain,” más fearr leat mar sin é.  So, no, the Mothman of West Virginia (and of “Prophecies” fame) didn’t suddenly become a Hiberno-Francophone and adopt a (presumably wingéd) “moth-cat,” as it were.  Fad m’eolais, ar a laghad.  Má tá tú ag iarraidh a bheith cinnte, cuir thusa thú féin an cheist air.  Tá beagán faitís orm roimhe.  And if you want to check out the lepidopterological possibilities for “cat,” please see the note which I have put below, since it is just a “beagáinín” tangential.

Why “moth-” then?  It’s used here as a prefix meaning “male” and is not, in my experience, all that widely used.  But nevertheless, it gives us one more possibility for “tomcat.”

A note re: pronunciation.  First, we have the usual coterie of silent consonants (I almost said “cattery” there, but caught myself just in time).  The “t” of “moth-” is completely silent, so this syllable is nothing like English “moth” or “mother.”  Not that there’s any reason why it should be–it’s just the tendency to see words from one’s native language when the same combination of letters shows up in a new language (other Irish/English examples: teach/teach, fear/fear, bean/bean, etc.).  There is still a slight breathy sound in the Irish “moth” because of the “h” so  “moth” sounds slightly different from the Irish “mo” (my).

As for the “ch,” it’s the guttural (throaty) “ch” sound of “chutzpah” and “challah” (the braided bread), aka for the teangeolaíocht-minded, the voiceless velar fricative.  This sound is often transcribed “kh” to distinguish it from English words like “chew” and “church,” and I’ve followed suit.  In IPA, it would, of course, be /x/, but that can set up its own Xerox-ox-xylophone paradox for those who haven’t studied IPA.  If you’re struggling with “chutzpah” or have always pronounced it “hutzpah” (fricativelessly), I can simply recommend the most entertaining explanation of the sound that I know, as sung by Lucille Ball and Carol Burnett: http://www.youtube.com/watch?v=v3XB4XXYhDs

And for French speakers, please remember that also, yes, French “chat” and Irish “cat” are etymologically related, as are Welsh “cath” and German “Katze” and more, but the Irish “chat” [khaht] is simply the lenited form of “cat,” not the basic form.  You also find the lenition (indicated in spelling by adding the “h”) in phrases like “a chat” (his cat), “do chat” (your cat), “ar chat” (on a cat), etc.

The short “o” sound of “moth” is actually a bit tricky to transcribe.  It’s like the “o” of Irish “mo” and “pota.”  But if I transcribe it as [mo], people tend to pronounce it like the name “Mo” as in Mo Willems or the “mo” of “slow-mo.”  So I’ve settled for a sort of non-descript “uh.”  In the “Irish-modified” IPA system, as used in Foclóir Póca and various other resources, the symbol is simply /o/, which is “official” but maybe not super clear for an English speaker.   For any German speakers out there, please remember this “uh” in the transcription is not like the German “Huhn” or the surname “Kuhn.”

So, all that just for pronunciation!  But then, “mothchat” is a deceptively simple-looking word and it’s good to (cat)nip any English “moth,” French “chat,” or plain ol’ “chat” associations in the bud.  I include “chat” there, as in “online talk” since it has become such an international word, a bhuí leis an Idirlíon.

All of which means, sound-wise, it would be rather fun to say “my tomcat” using “mothchat” as our basic word:

mo mhothchat [muh wuh-khaht], my tomcat.  As if anyone can really own a cat, ach sin scéal eile.

Of course, there are other ways to say “my tomcat,” using the more standard vocabulary:

m’fhearchat [mar-khaht, with the “a” of “mar” like “marry,” not like “March,” i.e. it’s the sound transcribed in IPA as /æ/].  Very literally this means “my man-cat” (!).  Remember, with this one, the “fh” is silent, as it is in phrases like “a fhiacail” (uh EE-uk-kil], his tooth,” and “A fheara!” [uh AR-uh], which is “Men!,” in direct address, especially as proclaimed by Fionn Mac Cumhail and similar characters in folktales.

baldúin, which I see sometimes written in English as “baldoon.”

Which somehow makes me want to sing, “There goes Baldoon … and he’s a solid, errm, cat.”  Apologies to Edward Harrigan there, but him being Irish, I’m sure he would have taken it in stride.

All of which would be more apropos if a cat, possibly Data’s Spot, were being beamed somewhere and temporarily had his móilíní scattered.  But then, come to think of it, Spot turned out not to be a “fearchat” after all, right.? Bhí ál piscíní aici (mar dhea) san Eipeasóid “Geineasas” (An Chéad Ghlúin Eile, Séasúr 7, Eipeasóid 19).

An interesting thing about the word “baldúin,” though — I haven’t yet found it in any Irish language dictionary, hard copy or online.  Maybe there’s a slight spelling variation, but I’ve tried several possibilities.   Given the existing “-in” ending, I’m wondering what the plural and possessive forms would be in Irish.  Heaven forfend that it would turn out to be like “an ghlúin” (the knee, the generation — a scéal féin ag an bpéire focal sin, is dócha), “An Bhurúin” (Burundi), or “An Vallúin” (Wallonia), and be (grammatically), feminine!  Bhuel, if so, it would at least join “stail” (stallion), which is also grammatically feminine in Irish.  “Bandia” (goddess), on the other hand, is grammatically masculine, while “banab” (abbess, lit. “woman-abbot”) is grammatically feminine, so the bottom line, I suppose, is that grammatical gender in Irish is a mixed bag (maybe the one the proverbial cat escaped from).  More like a “bosca Phandóra,” though, if you ask me, the more I think about it.  Smaoineamh ar bith ag duine ar bith agaibh faoi dhíochlaonadh an fhocail “baldúin”?

And finally, a third term, which can apply to male or female cats, young or old, and also, to, um,  people behaving like cats or perhaps other animals:

Hmmm, I thought I’d get to “caterwauling” in this blog, since it would seem fitting, but space is running out so that’ll have to wait for blag éigin eile.  BTW, that’s not “an spás amuigh,” where Miley Cyrus’s cute lost crying cat (caitín gleoite caillte ag caoineadh, as I dubbed it) is probably still safely ensconced.  That is, if anything can be safely ensconced while free-floating sa spás amuigh, gan chulaith spáis.  Spás don bhlag seo atá i gceist.  Ar an nóta sin, SGF — Róislín

Nóta: If you really want to say “moth-cat,” as in a hypothetical pet of Mothman, presumably you’d say “*leamhanchat,” since “leamhan” [LyOW-un] means “moth.”   Note that this word is “fada-less.”  “*Leamhánchat,” perhaps an even more far-fetched word than “leamhanchat,” would mean “*elm-cat” (!), based on “leamhán” [lyow-awn] “elm.”  And a double fada caveat, “*leámhánchat” would presumably mean something like “a cat made out of flimsy cloth,” perhaps a toy, based on “leámhán” [LyAW-wawn], “flimsy cloth.”  But that, as you may have seen coming, is all made out of whole cloth, although the elements of the compounds are sound and usable in their own way (ite ag na leamhain, moth-eaten; crann leamháin, elm-tree, srl.)