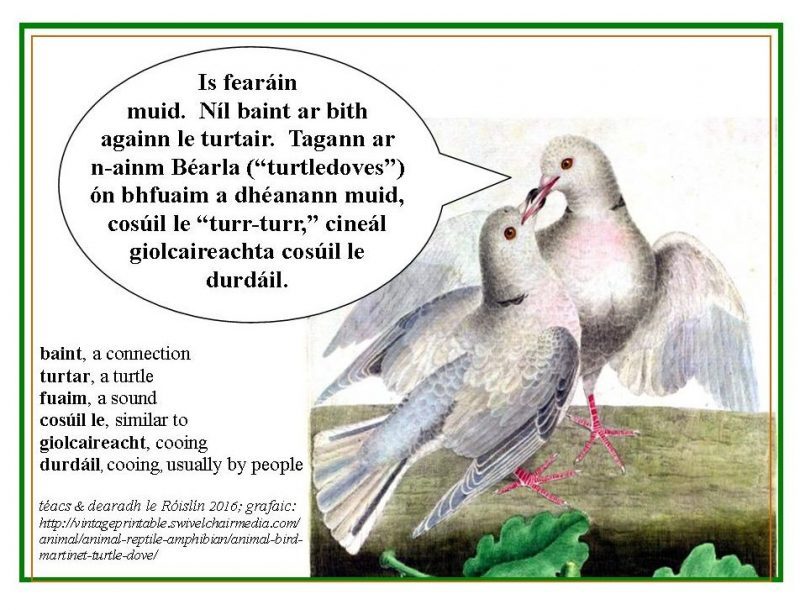 Although various previous blogposts (naisc thíos) have discussed these, today’s will look once again at the “fearáin” and the “cearca francacha,” with a few grammar and pronunciation notes.

dhá fhearán [ɣaw AR-awn], two turtledoves.  The gamma sign (ɣ) is the voiced velar fricative, for which there is a description at the link given below (sa nóta) and in various other blogs in this series; loosely speaking it’s like a deep  guttural “h.  The “fh,” as usual, is silent.  Notice also that while the plural form, fearáin, has an “-áin” ending, we drop that ending after a number.  This is an important and general rule in Irish: nouns remain singular when they come right after a number.  This will be important for this song, as we proceed further down the lists, and it applies broadly to Irish, if you want to say things like “two cats” (dhá chat, although the plural is actually “cait”) or “ten dogs” (deich madra, although the plural is actually madraí).

And for the cearca francacha (French hens), the same pattern applies:

And since these aren’t just any hens, we need to include the adjective, francach, which will get lenited and pluralized.

trí chearc fhrancacha […  RANK-ukh-uh], three French hens.  The “fh” is silent and the “ch” is the voiceless velar fricative, found, for example in German “Buch,” Welsh “Bach,” and Yiddish “Chutzpah.”   In Irish, when an adjective follows a noun that follows a number, it’s considered plural, even though the noun itself is singular!  Always struck me as aisteach!  And adjectives in this position are lenited, so “madraí dubha” becomes “deich madra dhubha” and “cait bhána” becomes “dhá chat bhána.”  In the latter case, “bán” would already be “bhána,” but the lenition is for a different reason.

Nóta re: an fhuaim “dhá”: As mentioned previously in this blog, this is similar to but deeper than the “ch” of German “Buch,” Welsh “bach,” and Yiddish “chutzpah.”  There’s no exact equivalent in English, or for that matter, in many other European languages.  For starters on the “dh,” try “Saying “I love you” in Irish and Minding Your Velar Fricatives (9 Meán Fómhair 2011) at https://blogs.transparent.com/irish/saying-i-love-you-in-irish/]  An example of this sound that I recently noticed, outside of its use in Irish and Scottish Gaelic, is in the name of the young Dutch singer Amira Willighagen of Holland’s Got Talent fame.  If you listen carefully, you can hear the /ɣ/ sound and you can also hear it in the name of her hometown (Nijmegen), which you can hear on Wikipedia or on Forvo.  It wouldn’t surprise me if many English speakers pronounce her name with a standard English “g,” but apparently that’s not the actual pronunciation.  Maybe some Dutch speakers here can suggest a few other basic Dutch words that have this sound — especially if they’re well-known words, as, for example, in place names.

2015: The Irish Twelve Days of Christmas Redux Redux with a Blogliography of Other Blogs on the Song Posted on Dec 25, 2015