Seacht véarsa den amhrán “Dhá Lá Dhéag na Nollag” curtha dínn, cúig véarsa fágtha.  Mar sin, tá sé in am dúinn a bheith ag breith ar an uain ar an urla chun an t-amhrán a chríochnadh.  In other words, there’s no time like the present to finish it.  Céard iad (nó “Cé hiad,” le bheith cruinn) na “bronntanais” atá fágtha? Cailíní bleánaí, mná (!), tiarnaí, píobairí, agus drumadóirí.  And, iontas na n-iontas, only one of these will actually have a change at the begining of the word and only one will change the ending for the genitive case! 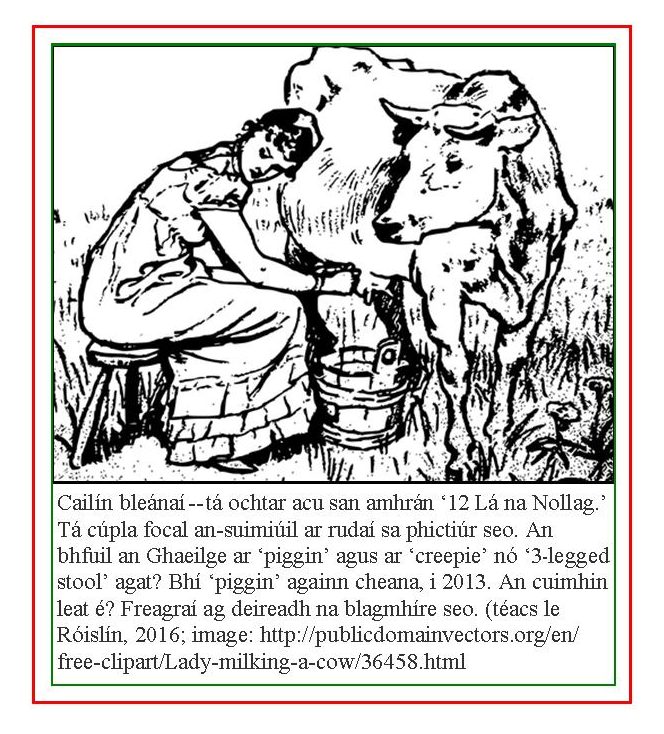 Why so few changes, for a change?  It’s because we’re using the “uimhreacha pearsanta” (personal numbers, such as “beirt,” “triúr,” “ceathrar,” etc.), which are for counting people (as opposed to counting things).  While “beirt” (two people) does cause lenition (beirt bhan, leniting “ban“), it’s for two people, and our milkmaids start at eight.  None of the others (triúr through dháréag) trigger lenition.  And of the five nouns used for the five remaining gifts, only one (“mná” becoming “ban“) has a distinct genitive case form.  Cailíní , tiarnaí, píobairí, and drumadóirí all stay the same in these particular phrases.  Merciful Heavens!

8:  ochtar cailíní bleánaí, more like saying “eight milkmaids,” since, i mo thuairim féin, it fits the rhythm of the song better than “ag bleán” or “ag crú,” which both mean “milking.” You still have to sing the “ochtar cailíní” part fast, to get all the syllables in, like OCHTar CAILíní.

9:  naonúr ban ag damhsa, which has the irregular genitive plural form “ban,” meaning “of women.”  Quick review of the forms of the word “woman”: bean, an bhean, mná, na mná, mná, na mná, ban, na mban.  “Mná” serves both for “of a woman” and for “women.”  Cúpla sampla: hata na mná, the hat of the woman,” and “hataí na mban,” the hats of the women.  So while “mná” and “bean” are just about lightyears apart in spelling, the form “ban” at least does relate to “bean.”  We could, of course, use “bantiarnaí” here, but it doesn’t fit the rhythm as well.

10:  deichniúr tiarnaí ag léimneach.  The word “tiarnaí” means “lords,” the plural of “tiarna” (a lord, or capitalized as “Tiarna,” Lord, as in “God”).  Again, you have to sing fast because “deichniúr tiarnaí” has twice as many syllables as “ten lords.”  Sometimes people say “ag léim” for “leaping” but “ag léimneach,” a variation, seems to fit the rhythm better.  “Ag léimnigh” also works.  Great powerful leps they were leapin’ anyway, so they were!

11: aon phíobaire dhéag ag seinm.  Here’s our lenition, “píobaire” becoming “phíobaire” [FEE-birzh-uh].  If you say this really quickly, it will fit the meter of the song, but if you try to actually say “piping,” (ag píobaireacht), you’ll have to speak like a ceantálaí (an auctioneer, and they have been known to utter 250 to 400 words per minute.  Thar mo chumas-sa, pé scéal é).

12, dháréag drumadóirí ag bualadh.  To say that the drumadóirí are “ag drumadóireacht” doubles the number of syllables that the English has (4 for English, 8 for Irish), so I’ve opted for “ag bualadh,” which is used for “beating” a drum, as well as “hitting” or “striking” in general.

So, sin na cúig lá eile agus na cúig bhronntanas eile agus deireadh an amhráin “Dhá Lá Dhéag na Nollag.”  I hope you found these recent posts fun and helpful.  Next year, maybe we’ll look into the ardmhatamaitic related to all these numbers.  Bhuel, maybe not an-ard ar fad but at least we could try adding them up (iad a shuimiú), to reach an móriomlán.  I know it’s been done in English, but it’ll give us a good workout with numbers in the hundreds.  But that’ll be níos mó ná trí chéad lá ón lá seo!  Am go leor le bheith ag domhainanálú le déanamh réidh don dúshlán.

And just as a reminder, it has never been my intention in this set of blogposts to include the lyrics to the song in Irish since numerous versions are circulation online, with nebulous copyright status.  They’re easily available through a simple Google search.  But I hope the vocabulary workout has proven helpful, and who knows, maybe we’ll have some further discussion of ‘piggins’ and ‘creepies’ in the future.  Slán leis an 12 Lá d’aimsir na Nollag go dtí an Nollaig, 2017. — SGF — Róislín

mornán, a piggin.  Well, I’m tickled pink to see “mornán” actually turn up again, since we covered it earlier in a 2013 blogpost (Speaking of Pigeons (Colúir) Posted by róislín on Dec 14, 2013 in Irish Language; https://blogs.transparent.com/irish/speaking-of-pigeons-coluir/).  It also shows up in the Irish translation of Pinocchio, and no doubt other texts as well.  Who would have thought we’d have the Irish for “piggin” yet again!  Remember, a piggin is a bucket with an extra-tall vertical stave instead of a handle, as you see in the picture, apparently so it could also be easily used as a large scoop.  Thrifty folks, our forebears.

stóilín, a small stool; I assume we could also call this a “creepie,” but I’d really have to check with a milkmaid to be sure.  Any milkmaids available for vocabulary consultation?  “Creepies” are usually described as being by the fireside but I’m sure they could be used taobh amuigh or i dteach na mbó also.  In addition to “stóilín,” in Irish, we could also call it a “stól tríchosach” (a three-legged stool) or a “stól trí chos” (technically, a stool of three legs).  Or we could even say, “stóilín tríchosach” (or “stóilín trí chos“).  But I haven’t seen anything in Irish that is an exact equivalent to the word “creepie.”  In fact, I’ve assumed that “creepies” are called “creepies” because one could imagine them (or the person sitting on them!) creeping closer to the fire, which might have something to do with the word “snámhaíocht,” but perhaps there’s some other reason.  Perhaps one of our readers knows.  Duine ar bith amuigh ansin?

2015: The Irish Twelve Days of Christmas Redux Redux with a Blogliography of Other Blogs on the Song Posted on Dec 25, 2015