Irish ‘Fill in the Blanks’ for ‘The Twelve Days of Christmas’ (Dhá Lá Dhéag na Nollag) (cuid/part 1 of 2) Posted by róislín on Dec 28, 2017 in Irish Language 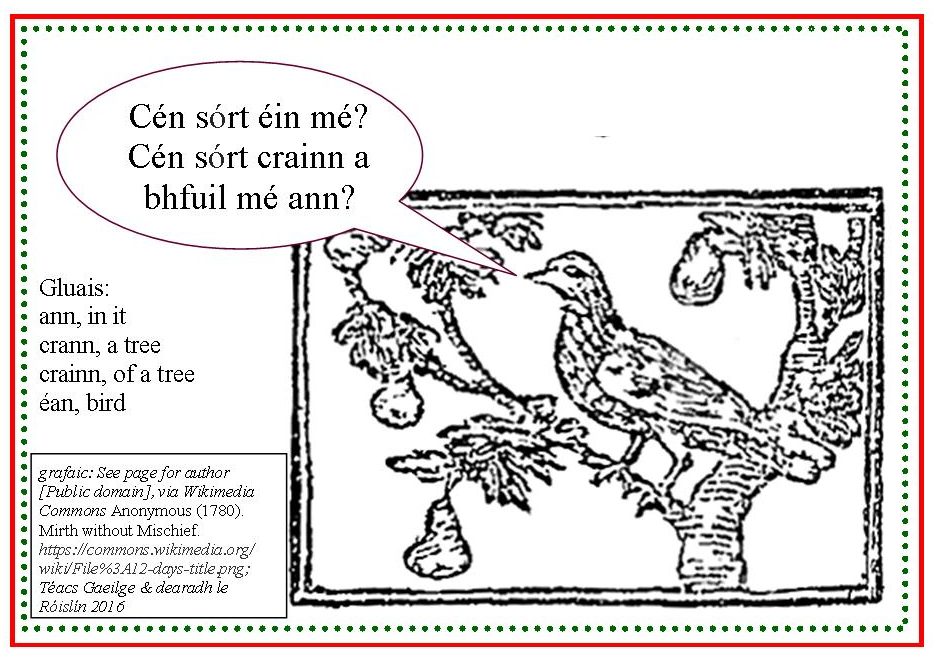 What kind of bird (cén sórt éin) is that in the tree?  And what kind of tree (cén sórt crainn) is it?  How would you fill in the phrase “sé __ __ __ ag breith“?  And what are those píobairí and drumadóirí doing ar an 11ú lá agus an 12ú lá den Nollaig?  See if you can fill in the blanks below.  Each phrase has just the right number of blank spaces for the intended word, so that will give you roinnt leideanna.  The freagraí, as usual, are thíos.  For more leideanna, you can check the previous blogposts in which the song “Dhá Lá Dhéag na Nollag” was discussed.  Heads up — there are cúig iarbhlagmhír déag on this topic!

Today’s post will only deal with the first six of the “Twelve Days.”  The other six will be treated next time.

By the way, the answer key will include a few pronunciation tips and a brief note explaining the structure involved for each answer.

In the interests of space, I won’t try to write out each line fully, but just the key points.  For the middle “chunk” of each line, I’ve seen at least two versions (thug mo leannán dom OR thug mo rúnach dom, and of course, the “dom” could be “dhom” or “domh,” depending on dialect — ach sin ábhar blag eile).

Numbers 7 to 12 will be continued in the next blogpost.  Hope you found it fun and a good chance to review Irish vocabulary AND get some small doses of Irish grammar!   SGF — Róislín

1a. patraisc [pronunciation: remember the “isc” ending is like the “-isc-” in the Irish “uisce” or “toisc” or “loiscfí“or the English “Ishkabibble” — and if any of you think I made that last word up, please see an nóta below]

1b. i gcrann piorraí [remember the “c” of “crann” is now silent since the “g” was added, so “gcrann” sounds approximately like “grahn”].  Here we have the process called “urú” (eclipsis) just as if we were saying “i gConamara” or “i gCamas” for “in Connemara” or “in Camus,” respectively.

2.. dhá fhearán bhreaca [to pronounce “dhá,” for newbies: the IPA transcription is /γa:/ and that gamma sign (γ) is the voiced velar fricative, for which there is a description at the following link  and various other blogs in this series; loosely speaking it’s like a guttural “h,” similar to the “ch” of German “Buch,” Welsh “bach,” and Yiddish/Yiddish-English “chutzpah.”  For starters on the “dh,” try “Saying “I love you” in Irish and Minding Your Velar Fricatives (9 Meán Fómhair 2011) at https://blogs.transparent.com/irish/saying-i-love-you-in-irish/]

Additional pronunciation points: the “fh” is completely silent and the “bh” of “bhreaca” is like a “v.”

As for the structure of this phrase, it’s a curious rule of Irish that, in most cases, after numbers, nouns stay singular but adjectives describing them have a plural ending and get lenited (séimhithe).  So how does a number phrase with “turtledove” compare to using the word with no numbers.  Bhuel, seo foirmeacha samplacha:

Regarding the actual word “turtledove”: as you can see, the Irish name for this bird is not imitative, the way the English is.  “Turtledove” in English is completely unrelated to turtles; the word originates in the idea that the “dove” coos “turr, turr.”  In Irish, we can say that the “fearán breac” is “ag durdáil” (cooing) and “durdáil” is imitative, but the phrase “fearán breac” is not.  “Breac” means “speckled,”

“Fearán” itself is intriguing.  Sometimes it’s translated as “turtledove,” (even without “breac“).  Sometimes it’s used for other types of doves “fearán binne (“rock dove) and it can be used for a specific type of turtledove, (fearán baicdhubh, collared turtle-dove).  But it’s not the most typical Irish word for “dove” — there are actually two more typical words: colm and colúr, which also mean “pigeon.”

3.. trí chearc fhrancacha, Again, the noun is singular, even after the number, so we don’t have “cearca” (hens) here, but “chearc” (singular), lenited after “trí.”  But the adjective has the plural ending (-a), is lenited (“f” becoming the silent “fh”), and lower case in Irish, since this is often done for geographic terms that don’t really mean nationality, but just a historical origin.  Pronunciation: remember the “ch” of “chearc” is like the “h” of “human” (except when Star Trek‘s Ferengi pronounce it!) and “humid.”  The “ch” of “fhrancacha,” on the other hand, is pronounced gutturally, like German “Buch,” Welsh “bach,” and Yiddish/Yiddsh-English “chutzpah” (my usual triumvirate of examples since the guttural “ch” sound doesn’t exist in most varieties of English).

4.. ceithre lon dhubha (remember, one theory says “calling” is supposedly actually “colly” or “coaly,” i.e. “black”) or ceithre éan ag glaoch. “Lon” is the “bird” part of “lon dubh” (blackbird) and is the sweet songster of Paul McCartney fame (“Blackbird singing in the dead of night …”). This European or Eurasian blackbird is a type of thrush.  By the way, this is different from the North American blackbird (lon dubh an domhain nua, in Irish), which is actually a general name for 26 different species, none of which are thrushes.

Much more generic is “ceithre éan ag glaoch,” since “ag glaoch” means “calling.”  “Éan” means “bird” and it undergoes no change after “ceithre” since it begins with a vowel.

Looking this answer over, I suppose one could also say “ceithre éan dhubha” (literally “four black birds,” but doesn’t mean “four blackbirds,” that would be “ceithre lon dhubha,”  The phrase “éan dubh” is just for if you’re very generally classifying birds by color (a black bird).  So, yes, a “blackbird” is a “black bird.”  But that’s akin to saying, in English, that a “darkroom” (for photography) is a “dark room,” which is true, but “dark room” doesn’t nearly describe the function or features of a “darkroom.”  Not that many of us need “darkrooms” much anymore, thanks to grianghrafadóireacht dhigiteach!  And btw, the Irish is the same, for both “seomra dorcha” for “a darkroom” and “a dark room.”

5.. cúig fháinne óir. Quite straightforward. “Fáinne” is “ring” and here the “f” has changed to a silent “fh.” “Óir” comes from “ór” (gold) and means “of gold.”  Some versions of the song say “órga” but I don’t think it fits the meter as well, and some interpretations indicate that this would mean that the rings looked “golden” in color but weren’t really “of gold.”  Ach ní seodóir mé, so I’m just interested in the basic message.

2015: The Irish Twelve Days of Christmas Redux Redux with a Blogliography of Other Blogs on the Song Posted by róislín on Dec 25, 2015 in Irish Language

Nóta maidir leis an bhfocal “Ishkabibble“: “Ishkabibble’s” is the name of a restaurant in Philadelphia established in 1979 (http://www.ishka-philly.com/), which, according to their website, is the home of the original chicken cheesesteak and which intriguingly offers “Our Famous Gremlin Drink.”  I’d love to pursue the “gremlin” bit, but even I have to admit, it’s not really connected to today’s blogpost.  So how did “Ishkabibble’s” get its name?   As their website says, “There are several meanings including a Yiddish expression meaning something like, “Do I look like I care?” Ishkabibble is also the title of a 1913 song and the nickname of big band trumpeter, Merwyn Bogue, who sang the song along with other novelty tunes with the Kay Kayser big band during the 1930s and 40s.” [sic].

For the diehards: The trumpeter (or cornet player, sources vary),  Merwyn Bogue, has his own Wikipedia entry (https://en.wikipedia.org/wiki/Ish_Kabibble), which includes some Ishkabibble-themed postcard art (https://en.wikipedia.org/wiki/Ish_Kabibble#/media/File:Ishgimlet.jpg).  As a word, “ishkabibble” has several interesting web pages.  Its Urban Dictionary entry (https://www.urbandictionary.com/define.php?term=ishkabibble) is reasonably accurate, but if you actually are pursuing this, please treat the seventh definition with a gigantic grain of salt — it sounds totally made up and whimsical, but you would have realized that anyway.  Also, the other six UD entries are all on the same theme (as of today’s date, anyway).  None of them bring up the additional interesting angles that Michael Quinlon does in his World Wide Words web page for this word (http://www.worldwidewords.org/weirdwords/ww-ish1.htm).

I know, I know, all that was merely to illustrate the pronunciation of the “-isc” ending of “patraisc” — but how could one resist such a tempting word as “ishkabibble,” especially when we consider its role in music, art, comedy, and restaurateurship  — what more could one ask for?  Plus, the word “ishkabibble” always reminds me of the Irish word “uisce” (water).  So maybe the origin is really “uisce + ba + hmm, it could be “ball” or “baol” or “balbh” or “bile” or  “boladh” or “bólaí” or “bolla” or “buabhall” or “bulaí or “bulla” or “bumaile“(hmmmm, *uisce-ba-bumaile — sounds like an American football cheer, especially is you add another Irish word, “leaca,” so we end up with “*bumaile-leaca.”

Which would bring us full circle to the question of whether “kybosh” is Yiddish or Irish.  Definitely ábhar blag eile but we’re way out of space here for today.