Twenty Ways to Say ‘Happy’ in Irish and Which Ones to Use for ‘Christmas’ and ‘New Year’ Posted by róislín on Dec 25, 2017 in Irish Language 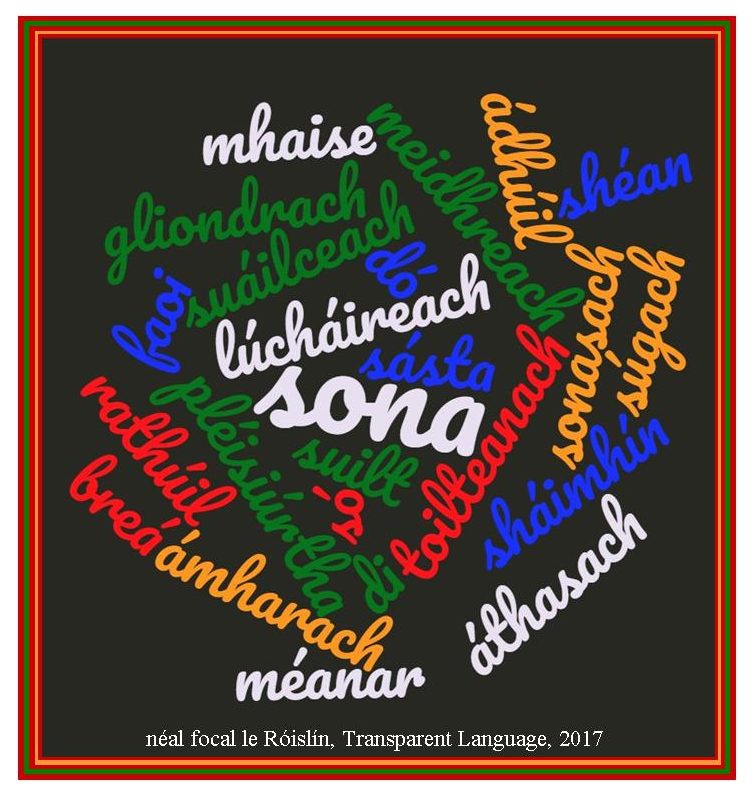 In various previous blogposts (naisc thíos) we’ve looked at how to say “happy” in Irish.  Like many times when we go from one language to another, it seems like the more you look, the more possibilities you find.  So right now, the count for “happy” is at twenty, and I’m sure a few more will show up eventually.

One key point, before we go further, is that this blogpost will specifically deal with “happy,” not the noun “happiness.”  Including “happiness” would take another full blogpost.  But I will say that the phrase most learners start with is “Tá áthas orm,” (I am happy, but literally, “Happiness is on me”).  So today, we’ll include “áthasach” (happy) which is based on “áthas” (happiness) but we won’t deal further with “Tá áthas orm,” except to note that it is, of course, a very important phrase to know in Irish.

Why not emphasize “Tá áthas orm“?  Bhuel, ’tis the season, you know, and today we’re going to look at the phrases for ‘Merry Christmas,” which is often “Happy Christmas” in both Irish and British English, and for “Happy New Year,” which uses two two-word phrases for “happy,” but no single adjective.  Neither of these seasonal phrases uses “áthas,” or even “áthasach,” so we’ll start with “sona,” “faoi shéan,” and “faoi mhaise,” since these are used for the holiday phrases.  Then we’ll do a whirlwind tour of “happy”  — seventeen more ways to say it.    Hey, perhaps our tour will lead us to either  An Iorua, which is 2017’s “World’s Happiest Country” winner, or An Danmhairg, which took the honor in 2016.  Bhuel, not really, but there’s a link below (nasc thíos) for an article about national happiness.

As I’m sure you’ve noticed, these words and phrases were used to create the word cloud above.  It took quite a bit of manipulating to get “sona” to be fairly central and fairly large, so I hope it makes the point.  “Sona” probably is the most basic of all, out of all of these ways to say “happy.”  But they all have their role, agus a gcomhthéacsanna.

1)) sona, used for “Nollaig Shona dhuit” and “Nollaig Shona dhaoibh” (both meaning “Merry/Happy Christmas to you.”  “Sona” is probably the most basic adjective for “happy.”  It also shows up frequently in the combination “sona sásta” (happy content) and it is the basis of another adjective, “sonasach,” and the noun “sonas” (happiness).  It’s also the opposite of “dona” (bad), and there’s a small series of words with this “s/d” alternation for positive and negative (sona/dona, sochar/dochar, soiléir/doiléir, sorcha/dorcha, suáilceach/duáilceach).

In addition to Christmas phrases, “sona” is also used for “Happy Birthday to you” (Lá Breithe Sona Duit OR Breithlá Sona Duit).  But please note, it’s not necessarily used across the board for “happy” with festive events, as we see in phrases like “Beannachtaí na Cásca” (Happy Easter), “Cáisc faoi mhaise” (Happy Passover), “Go maire sibh an lá!” (Happy Anniversary), and “Athbhliain faoi shéan” (Happy New Year!).  Of course, there’s nothing to stop one from using “sona” in these contexts, but mostly we try to use the expressions that are tried and true, or at least the ones suggested by dictionaries.  “Happy Easter” can also be “Cáisc Shona” but the “beannachtaí” phrase seems to be more traditional.  If you’re intrigued by “Cáisc” serving for both Easter and Passover, please see the note below.

2)) faoi shéan, part of the “Happy New Year” phrase: Athbhliain faoi shéan is faoi mhaise dhuit (plural: “dhaoibh” instead of “dhuit“).  Literally, it means “under happiness” and it’s related to the noun “séan” and another adjective, “séanmhar.”

3)) faoi mhaise, also part of the “Happy New Year” phrase, although one can use just “faoi shéan” or just “faoi mhaise.”  But to me, it sounds the most complete and most heart-felt to use both phrases.  Literally, it’s “under adornment/beauty/happiness/prosperity” and it’s related to “maisiúchán” (decoration) and “maisigh” (decorate).

The rest of the words for “happy” we’ll treat more succinctly, but I’d be happy to delve further into the nuances of meaning sometime in the future, if there’s interest.  By the way, to say that “happy” (happy to do something) I’d probably use ” bheadh áthas orm” or “breá sásta,” not “sona.”

So here are the remaining seventeen phrases, with some guidelines as to their additional meanings.  I’ve listed “happy” first, as a definition, to show the common thread, but “happy” isn’t necessarily the primary meaning, especially for “meidhreach,” “súgach,”  “pléisiúrtha,” and “toilteanach.”

11)) méanar, pretty much limited to the phrase “Is méanar dó/di” (it’s happy/lucky/well for him/her) and its variations, using the Irish verb “is,” not “tá.”

Nóta faoin bhfocal “Cáisc”: It may seem surprising, from an English-language perspective, that the words for “Passover” and “Easter” are the same in Irish, but they are.  Sometimes Irish does use “Cáisc na nGiúdach” but “Cáisc” alone can suffice.  When I first noticed this, I was very intrigued, so I searched around a bit and found that they are the same in Spanish (Pascua), Latin (Pascha), and Welsh (Y Pasg).  In French they’re similar (Pâque vs. Pâques), and Italian simply adds “ebraica” (Pasqua ebraica).  I must say, though, that translate.Google.com is really stretching it when it reverse translates “Pasqua ebraica” as “Jewish Easter” (nasc don chuardach thíos).  As always, any comments from speakers of those languages are welcome; my conclusions are based on checking several dictionaries for each language, hard-copy and online.