First, let me say that as far as cooking vocabulary goes, this blogpost is very specific to discussing “craiceann criostalaithe,” so general cooking vocabulary (like “bruith,” meaning “cook,” “bake,” “boil,” and “grill”) will have to wait for another blogpost.  If that’s a topic you’d like to see discussed further, please do write in and let us know.

The main focus today is that I finally figured out another one of the labels on the 1884 humorous Christmas cartoon that was featured in two earlier blogposts this month (naisc thíos).  As you may recall, it was entitled “The Christmas Pudding: How It Comes and What Came of It, A Seasonable Morality for the Young Folks, which Old Folks May Take a Hint from).  A small cropped section of the cartoon is in the graphic above and the full cartoon is reproduced below.

Since the cartoon included labels (lipéid) for the ingredients (comhábhair) for a  Christmas pudding (maróg Nollag), I thought it would be fun and challenging to translate the ingredients to Irish.  So, in the previous blogs, we discussed uibheacha (eggs), rísíní (raisins), siúcra (sugar) and plúr (flour), since those labels were legible.   But as I said before, there were still some labels that I couldn’t read.

At first, I thought the lettering for the blurry label might say “cranberry,” even though that didn’t seem very likely for a Christmas pudding, which usually contains raisins, currants, and/or candied fruit.  I don’t think I’ve ever heard of candied cranberries being used, although, admittedly, it sounds feasible.  For the sake of thoroughness, I’ll note that there is an Irish word for “cranberry,” (mónóg, pl: mónóga) but it has never seemed to me as prominent in a traditional Irish diet as it is in North America.  And there are actually two major types of cranberries, one found in northern Europe and the other in North America, but the details of those distinctions are, like so many other topics, ábhar blag eile!  The good news is that I finally figured out what one of the blurry labels (lipéid dhoiléire) said: candy peel.

Now that we’ve established that the child in the picture is carrying a basket of candy peel, let’s look at the phrase in Irish.  It’s quite interesting.  There are at least two different phrases for “candied peel.”  BTW, they seem to always get translated as “candied peel,” not “candy peel,” but that’s really a minor point.  Here are the two basic terms, and then we’ll follow with a closer look at the individual words:

a)) craiceann glacé, candied peel, lit. glazed skin, hmm!  In theory, it could also mean “iced, frozen, or chilled” skin, since the French word “glacé” has those meanings as well.  Curious also because, as far as I can tell, the French phrase for “candied peel” is “écorces confites,” with “confit” as the “candied” part.  So the Irish uses a French word, but the French don’t use the same French word for the same food item.  Well, wonders never cease!  BTW, “Glacé” can also be used to describe cherries (silíní glacé).  And I wonder how one technically describes the difference between silíní glacé and silíní maraschino, since the silini maraschino are wet and syrupy, not dried, but could also be considered “candied.  Sin ábhar blag eile — eile!

Anyway, the other term for “candied peel” is:

b)) craiceann criostalaithe, candied peel, lit. crystallized skin.  Sometimes it’s given in the plural (craicne criostalaithe), but still means the same as “candied peel;” we don’t really say “candied peels” in English.  This term actually seems more exact than “glacé” to me, at least for the type of dried sweetened peel I associate with Christmas puddings or fruitcakes.

It seems to me, not that I’m any kind of chef or food scientist, that there’s a difference between “candied” which may mean sort of moist and shiny with sugar syrup, like Maraschino cherries, and “crystallized,” which is dried, chewy, and sweet, and usually has a sort of dull finish.  Well, the terminology doesn’t seem to make that much difference in the culinary world.

Agus sin é don bhlagmhír seo.  Like many language topics, the subject seems to get more complex the more you try to simplify it.  But, for today, the key points would be:

1)) one more blurry label from the historic cartoon was interpreted; it says “candy peel,” which is basically the same as “candied peel.”  There are still a couple of labels I can’t read but I’m not sure if anyone can.  Unless there’s someone who has access to a print copy of the original (1884) publication.

2)) there are two ways to say “candied peel” in Irish, both using “craiceann” (skin) for “peel.”  One uses the French word “glacé” for the “candied” aspect and the other uses the Irish word for “crystallized” (criostalaithe).

3)) a final point that I might add here is that neither term uses the traditional Irish word for “candy” (sweets), which is “milseáin” or a somewhat more recent borrowing into Irish, which is simply “candaí.”

So I guess the moral of the story is never to leap to conclusions about how a phrase will be translated as you go from one language to another.  Irish has innumerable examples of where the translations are not literal, or aren’t what an English speaker might expect to find.  One quick example is that “brown sugar” can be called either “siúcra rua” (lit., coppery-red sugar) or “siúcra donn” in Irish.  Why “red” at all?  Curious thing, though, is that Welsh has two parallel phrases for “brown sugar”: siwgr coch (lit. red sugar) and siwgr brown (brown sugar).  Why is “brown” sugar considered “red” — barúil ar bith agatsa?  I usually just try to go with the flow, and not agonize over why a target language and one’s native language approach the same thing in two different ways.  These dual pathways make language learning endlessly fascinating but may also sometimes give the impression that the learning process itself is endless.  The key things, I think, are patience, perseverance, and practice (3 Ps for the Q-Celtics?), and trying to learn the language from the inside out, not by trying to translate word for word from one’s native language.  On that sweet note, SGF, and we’ll probably deal more with “peel” vs. “skin” and “candying” soon! – Róislín

Maróga Nollag (That’s “Christmas Puddings” in Irish): A gComhábhairPosted by róislín on Dec 6, 2017 in Irish Language 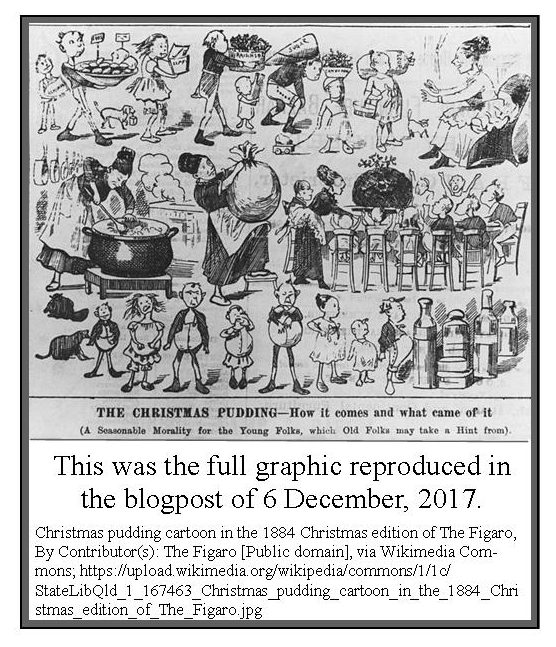 Christmas pudding cartoon in the 1884 Christmas edition of The Figaro By Contributor(s): The Figaro [Public domain], via Wikimedia Commons; https://upload.wikimedia.org/wikipedia/commons/1/1c/StateLibQld_1_167463_Christmas_pudding_cartoon_in_the_1884_Christmas_edition_of_The_Figaro.jpg