A Partial Glossary for “Silent Night” in Irish (Oíche Chiúin) and in Welsh (Tawel/Dawel Nos), plus a nod toward the German (Stille Nacht, Heilige Nacht) Posted by róislín on Dec 17, 2017 in Irish Language 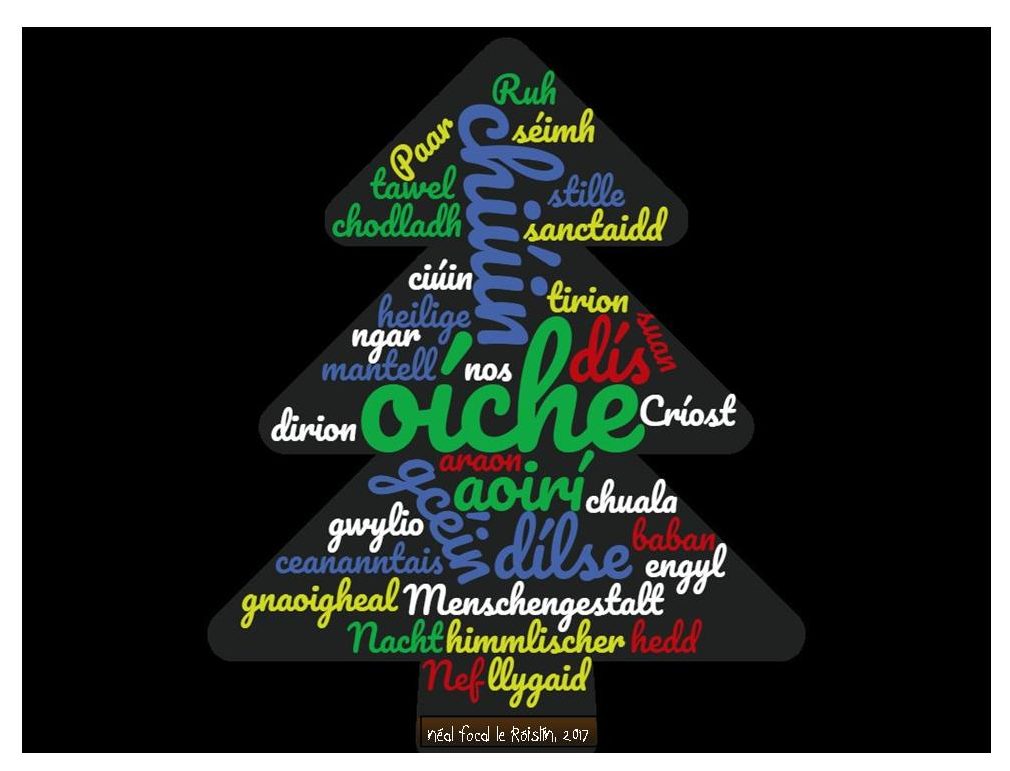 As you might guess from looking at the graphic above, today’s blogpost will deal with some vocabulary for the Christmas carol, “Silent Night.”  We’ll mostly focus on the Irish text, of course, but I thought I’d include a few notes on the Welsh, particularly because almost every version of it that I’ve seen online has some irregularities which make it sort of difficult to figure out the exact meaning.  And I’ve thrown in a few words from the original German, partly for good measure, and partly because I was intrigued by the word “Menschengestalt.”  I thought “Geschwindigkeitsbegrenzung” (speed limit) which was taught on my first day of German class, was impressive, but “Menschengestalt” gives language learning a good run for its money!

I’m not including the texts of the songs here, because I’m not sure about their copyright status.  The Welsh one is almost always published with the note “cyfieithydd anhysbys” (translator unknown), so I assume it’s in the public domain, but one can’t be certain.  For the Irish version, I don’t know who translated it, so I’d rather not take any chances.  The German one is now public domain, AFAIK,  being about 200 years old but there’s really no need to reproduce it here, because it is so widely known.  However, I have provided some links to online versions below (naisc thíos).

For this song, I’ve divided up the words into a) the basic vocab, which is in the word cloud but is probably already familiar, and b) the less typical:

dís, a pair of people (usually “beirt” is used, so why “dís” here — probably because it sounds good with “dílse,” which follows)

gnaoigheal, basically “beautiful” (brightly beautiful?), although this exact word, which is a compound word, doesn’t show up much in dictionaries (I just double-checked six!).  It’s from “gnaoi” (beauty, affection) + “geal” (bright); cf. gnaíúil, beautiful.  The most basic word for “beautiful,” though, I’d say is “álainn.”  Why use this word instead of “álainn“?  I think it’s because it sounds good following “naí” or naíon” (both versions appear), and in songs and poetry, the way words sound can be as important as what they mean.

2.. Welsh version (naisc thíos): Tawel Nos or Dawel Nos, lit. quiet night, but interestingly, this is not the usual word order in Welsh, where adjectives usually come second, as in Irish (oíche chiúin) and many other languages.

engyl, from “angel,” which makes it a giveaway, meaning “angels;” an alternate plural is “angylion.”

gwylio, to watch, watching.  This was the word that sent me on a major Google quest that seemed to go round in circles for a while.  Over and over again, online, this part of the text is shows up as “Gwylion dirion yr oedd addfwyn ddau [sic].”  The ending “-ion” is very widely used in Welsh (as in “cantorion,” “enwogion,” “lilis gwynion,” “rhosys cochion,” “cerrig gleision,” a.y.y.b.), so I kept trying to figure out what word with “gwyl” as a root would have “-ion” as an ending.  Concurrently, I kept trying to figure out why “tirion” would change to “dirion” if there was nothing to trigger the change.

Finally, the penny dropped and I realized that the text should (I assume) be written as “Gwylio’n dirion” (gwylio + yn + tirion), which would mean “watching tenderly,” which seems to fit the context quite well.  This also accounts for why “tirion” changes to “dirion,” after the particle “yn.”  If anyone has another interpretation, please do let me know.

hedd, peace, perhaps best known, even to non-Welsh speakers, from the word “heddlu,” which is painted on police cars in Wales.  Like “gardaí síochána” in Irish, it basically means “peace-keepers.”  Also, this year marked the hundredth anniversary of the death of the famous Welsh poet, Ellis Humphrey Evan, better known by his bardic name, “Hedd Wyn” (Blessed  Peace, lit. White Peace).  The 1992 film about him was an Oscar-nominee and the first Welsh-language film to achieve that status.  Highly recommended!

Nef, Heaven (but just shows up as “Ne” in some versions of the text  –easier to sing that way!

The German title is pretty self-explanatory (stille, still, quiet, as in “still waters,” and “heilige,” holy), and of course, it’s the original. A few other words of interest are “Paar” (conveniently similar to the English “pair”) and “Ruh” (often now written as “Ruhe,” peace, rest, quiet, and a distant cousin to the English word “unruly”).

I was tickled to see “himmlischer” as a direct equivalent to “heavenly,” but more so because “Himmel” (Heaven) is one of those words I just absorbed somehow, as a kid, probably from some movie or TV program.  There are two main usages I remember.  First,  the song “In Himmel  gibt’s kein Bier,” which seems to have a fascinating history of its own (in English and Spanish, and which was a major hit for the Ghanaian musician, Atongo Zimba — did he sing it in Twi or Ewe, or any of the other 80-ish languages spoken in Ghana?).   Regarding those two languages, “Twi” does have an Irish name (Tíbhis), but I can’t find one for “Ewe.”  Another task for the Coiste Téarmaíochta?   Not to mention, has the song been translated into Irish?

Secondly, somewhere, I also picked up “Gott in Himmel,” which I guess really should be “Gott im Himmel,” but if it showed up in an English-medium movie or TV show, it quite likely got changed.  …  Well, I couldn’t resist searching and found “Gott im/in Himmel” was used in such popular entertainment as The Simpsons Movie (2007), Follow That Camel (1967; one of the  “Carry On” movies), and Monty Python’s Flying Circus (S1E1).  My general point — we may learn some foreign words without even trying in some lightweight contexts, and lo and behold, they may show up in more serious texts later.

But finally, I wanted to include German here simply because I was intrigued by the phrase “in Menschengestalt,” which apparently means “in human guise.” “Gestalt” is already sort of familiar, and  I know “Mensch,” more from Yiddish than the actual German, but what an interesting compound word!

And how would we say “in Menschengestalt” in Irish?  Food for thought, for sure.  Perhaps modeled on the Irish “conriocht” (werewolf) which literally means “hound-shape,” with no specific reference to wolves.  There’s also “sionnach-riocht” (werefox), for the “renard-garou” as opposed to the “loup-garou“!  So maybe a compound word like “*daonriocht,” if that exists  — I see no sign of it online, but it seems reasonable.  Or, I suppose one could say, more straightforwardly, “i riocht daonna” or “i gcruth duine.”   Anyway, “in Menschengestalt” seems like a fun, word-geeky way to end this blogpost.

For a documentary on the history of the song: http://www.s4c.cymru/cerddoriaeth/e_dawel_nos.shtml (looks fun, but I haven’t had a chance to watch it yet)