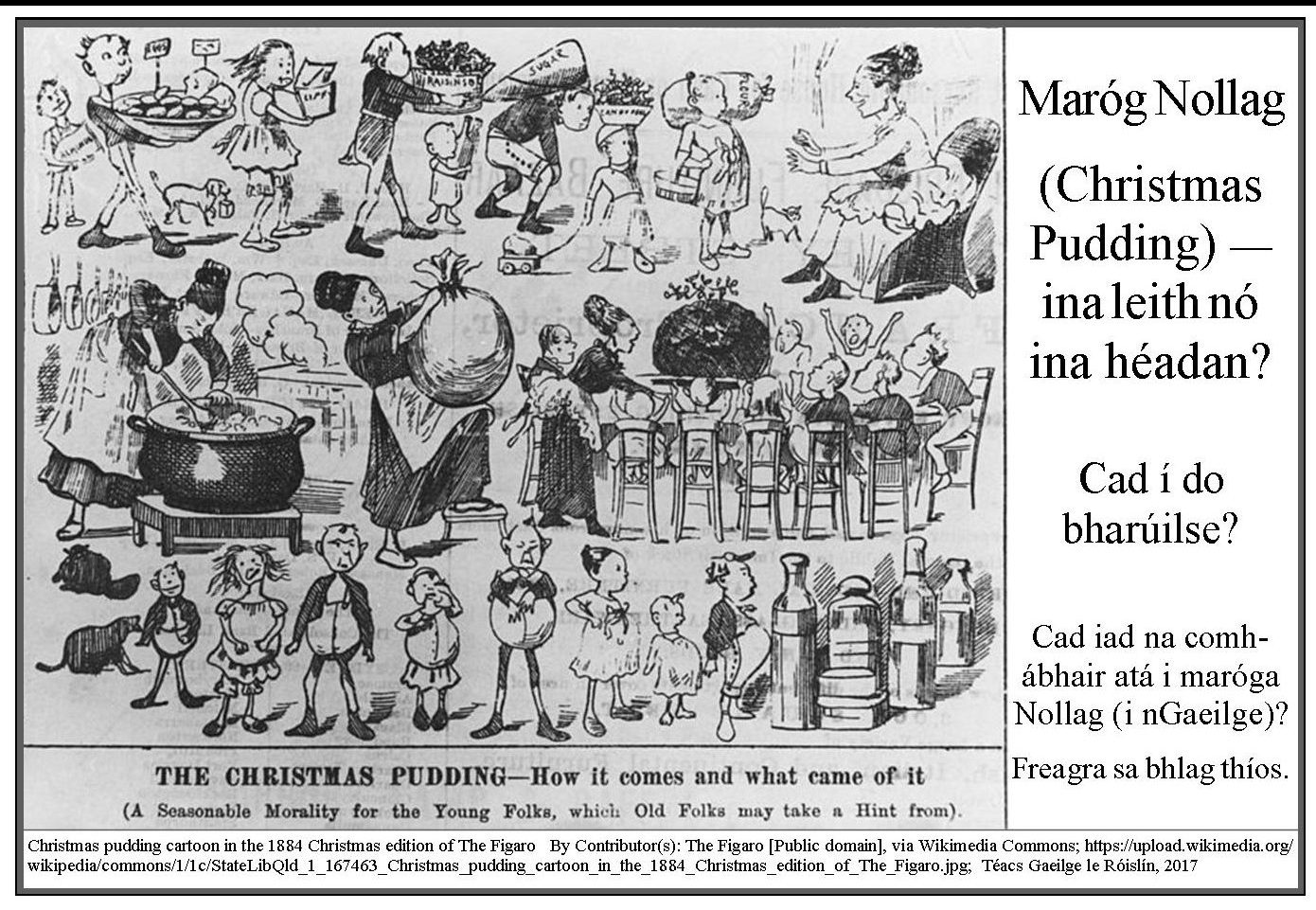 An maith leat maróg Nollag?  Nó an fuath leat í?  An bhfuil tú ina leith nó ina héadan?  An ndéanann tú féin maróga Nollag amanna?  (Do you like Christmas pudding?  Or do you hate it?  Are you for it (ina leith) or against it (ina héadan)?  Do you make Christmas puddings sometime?)

According to the graphic above, dated 1884, eating Christmas pudding, or at least eating too much of it, can have dire consequences.  Cad a shíleann tusa faoi?   (What do you think about it?)

Whatever your thoughts (smaointe) on the matter, it might be interesting to talk about the ingredients (na comhábhair).

I’ve tried to make out the words in the labels (na lipéid) in the graphic above, but some of them are almost impossible to read.  Perhaps some readers might recognize the ones I couldn’t figure out.  If so, please do write in and let us know.

To add a little dúshlán to the topic, let’s make it a matching game.  First, I’ll list in English, the four ingredients that I can read, as a word bank, with an extra one for good measure.  Then I’ll list the Irish equivalents.   And, of course, they won’t be in the same order as the word bank.   Leid, which may be pretty obvious:  three of the words are pretty close to the English, so please don’t think there’s any kind of trick going on:

As for the labels I can’t make out, three are completely unintelligible, and a fourth looks a little like “cranberries” (mónóga) although I really doubt that cranberries were traditional in Christmas puddings, unless of course, the Christmas pudding is being made in North America (i Meiriceá Theas).  But then, in the US at least (not sure about Canada), one usually makes “císte torthaí” (fruitcake), not “maróg Nollag.”  “Christmas pudding,” as such in the US is usually either an import item (earra iomportáilte) or made for Dickensian-type events.

Then there’s a little boy carrying a bottle of, b’fhéidir, brandy (branda).

Well, I hope this has whetted your appetite, although the graphic does suggest some dire consequences. perhaps requiring a “purgóid” (laxative).  – SGF — Róislín

The odd word out was suet, which is “geir” (also meaning simply “fat,” although there are at least five other nouns for “fat,” never mind the adjectives, which I won’t even count here: blonag, méathras, méith, olar, saill).  “Geir” is an interesting word in and of itself, 2nd-declension feminine, with the following forms:

an gheir, the suet, the fat

na geire, of the suet, of the fat (blas na geire)

na geireacha, the suets, the fats — although, frankly, I never thought about using the word “suet” in the plural

na ngeireacha, of the suets, of the fats.  A natural context for this, anyone?  Of course, we could always say, “blas na ngeireacha” (the taste of the suets / the taste of the fats).  Bhuel, I never said that all examples of Irish phrases have to be practical!  It’s an interesting topic, the plural of “suet,” but we’re out of space for this blogpost, so we’ll have to “pursuet” another time.  <OSNA!>