An Lorg sa Sneachta (The Track in the Snow): Snow Angels and More in Irish Posted by róislín on Nov 30, 2017 in Irish Language 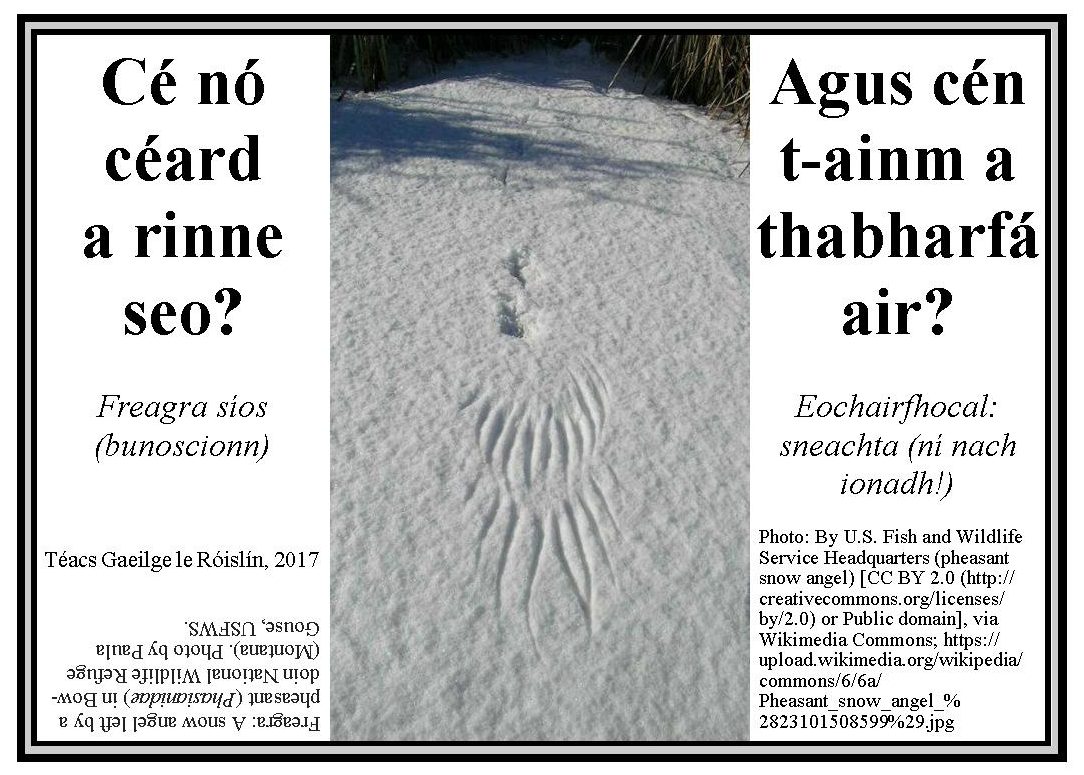 This may be the time of year when adults (daoine fásta) and children (páistí) alike enjoy making snow angels (aingil shneachta).

I haven’t found the term “aingeal sneachta” in an Irish dictionary so far, but it seems to be quite a straightforward combination.  And I did find one (just one!) hit for the plural form (aingil shneachta) in a charming collection of student essays on the theme of “Tubaiste ar Scoil,” written by students in Rang a Sé at Scoil Raifteirí in November, 2015 (Mí na Samhna, 2015), for which the nasc is thíos.  One of the students finished her essay by stating “… thosaigh siad ag déanamh fir shneachta agus aingil shneachta.”

Fir shneachta and aingil shneachta may be all well and good, but what made the snow print in the photograph above?  Seo an freagra: piasún a rinne é.  Yes, it’s a snow angel (sort of) made by a pheasant, which has left the marks of its feathers in the snow.  Cool, nach bhfuil?  And how to say “a pheasant’s snow angel” in Irish?  “Aingeal sneachta piasúin,” just inserting an “i” before the final “n” of “piasún.”  And I can almost guarantee that that will not be in any foclóirí (dictionaries).

Maybe we should do all the forms of “aingeal sneachta” here, while we’re at it.  “Fir shneachta” has been treated pretty thoroughly before in a previous blogpost (nasc thíos).

an t-aingeal sneachta, the snow angel

And since “piasún” may be a new word for some, here are its forms:

Speaking of angels (aingil), here are few other angel terms (téarmaí aingil) that might be of interest:

recording angel: aingeal an chuntais, a different term from “guardian angel,” although their traditional functions are somewhat overlapping.

the Angelus bell: clog an aingil

There is an interesting proverb about angels in English, “Talk of angels and you will hear the flutter of their wings,” but its equivalent in Irish is quite different: “Tagann gach aon rud lena iomrá (ach an madra rua agus an marbhánach),” lit. Everything comes when it is spoken of (or more specifically, “with its mentioning”), except the fox and the corpse.  As you can see, it’s not an exact translation at all.  Even more intriguingly, the same Irish proverb may also be translated with reference to the devil.   Of course, the devil as such isn’t mentioned in the Irish version, any more than angels are.

As an adjective, we have the following:

The “angelfish” though, isn’t angelic in Irish.  It’s a “bráthair,” (lit. brother), a word usually reserved for “brother” in the religious sense (as opposed to “deartháir,” the ordinary kinship term).  So, what’s the “monkfish,” then?  Rather inexplicably, it’s “láimhíneach.”  But there is also the “angel shark,” which, confusingly is also known as “bráthair” and is called “anglait,” as well.