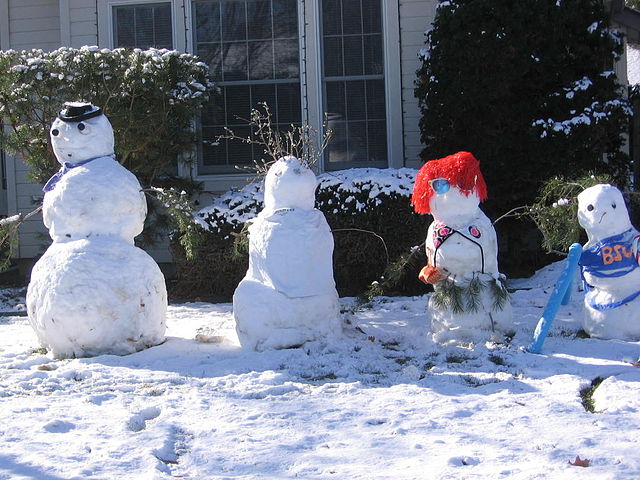 OK, so this isn’t really going to be a Men-Are-from-Mars-Women-Are-from-Venus-y exposé of the relationship between men and women around Christmastime.  So we won’t be dealing with “man caves” (*fearuaimheanna, is dócha) or oidhreacht an uaimhigh i sochaí an lae inniu.

Instead, we’ll simply look at the Irish words for “snowmen” and “gingerbread men,” both popular at this time of year.  We’ll also look at “snowwomen” (Yay! That passed the spellchecker, so I guess the -owwo- is legit — I was owwondering!) and “gingerbread women,” but honestly, there aren’t nearly as many references to the distaff side of today’s topic, at least not online.

In today’s blog, we’ll discuss the basics.  Maybe in an upcoming blog we can discuss snowperson fashions, the relative merits of lumps of coal vs. currants for buttons, whether frosting is really “frost” from a snowman’s perspective, and whether having a carrot for a nose gives one a Pinocchio or Cyranose (oops, but not really!) de Bergerac complex.  But meanwhile, here’s the lowdown on the snowmen and women:

an fear sneachta, the snowman

hata an fhir shneachta, the hat of the snowman

hataí na bhfear sneachta, the hats of the snowmen

And for the women,

an bhean sneachta (Why not “shneachta“?  Remember the d-n-t-l-s rule, with “s” resisting lenition after “n”)

hata na mná sneachta, the hat of the snowwoman

na mná sneachta, the snowwomen, and for one of the few samples of this phrase that I can find online, check out the photo posted by Osgur Ó Ciardha at https://t.co/Emhl3DpSuy (https://twitter.com/OsgurOCiardha/statuses/669954578671104000).  Osgur has aptly captioned his picture: “Tá na mná-sneachta Kardashian i @SmithfieldSq anocht,” given the generous backsides presented by these snowperson-costume-clad folks.  Which leads us to our final line of grammar practice, probably not found in any traditional Irish grammar book:

Of course, what I’m really waiting to see is a “bean sneachta Cardassian,” or even a “fear sneachta” version.  But somehow I don’t think the issue of frozen precipitation in the Cardassian Union ever came up in any of the Star Trek episodes, so I doubt there’s a tradition of snow figures there.  But with a little extra attention to detail (iomairí an mhuiníl, srl.) and some green food coloring, I’m sure it could be managed.  Oh, and a drop of blue for the women for the forehead marking outlined by “iomairí a n-éadain.”

And now for “na fir shinséir,” starting with the singular form:

an fear sinséir, the gingerbread man

cnaipí an fhir shinséir, the buttons of the gingerbread man

cnaipí na bhfear sinséir, the buttons of the gingerbread men

And now the gingerbread women:

cnaipí na mná sinséir, the buttons of the gingerbread woman

cnaipí na mban sinséir, the buttons of the gingerbread women

Well, those are the main images I can think of for Christmas treats and pastimes.  Speaking of “fir” and “mná” and aimsir na Nollag, pretty soon we’ll have to revisit the “naonúr ban ag damhsa” and the “deichniúr tiarnaí ag léimneach” in the song “12 Lá na Nollag.”  But meanwhile, you might want to check out other blog posts about that Christmas carol in this series, starting with https://blogs.transparent.com/irish/ce-mhead-patraisc-ce-mhead-drumadoir-or-12-la-na-nollag-redux-and-an-irish-counting-lesson-to-boot/ (Cé Mhéad Patraisc? Cé Mhéad Drumadóir? (or ’12 Lá na Nollag’ Redux and an Irish Counting Lesson to boot, Posted on 18. Dec, 2013 by róislín in Irish Language)

Meanwhile, I’ll just wrap up by saying that I haven’t seen much discussion of “man caves” in Irish, or any at all, really, but there are countless references to the idea in English.  Some of them also bring up the question of the household space designated for the woman, such as http://havetimenowwhat.com/2012/09/06/if-men-have-man-caves-what-do-women-have/ (If Men have Man Caves, What do Women Have?  Yvonne / September 6, 2012).  Yvonne, for one, likes “She Cave” (but not “Woman Cave,” which would be a closer parallel to “Man Cave”).

I doubt that that Yvonne had any reason to ponder what “She Cave” would be in Irish, but my gut reaction is that it would be a linguistic concatenation of meanings, since “sí” in Irish can mean both “she” (the pronoun) and “fairies” (collectively) or “fairy mound.”  The latter refers to the underground dwelling place of fairies, who, as you may remember, in Irish folklore are generally approximately human-sized.  So they don’t live under flower petals or toadstools.  You might remember “sí” for “fairy mound” from the musical composition, “Sí Bheag, Sí Mhór” (lit. little fairy mound, big fairy mound), often anglicized as “Sheebeg, Sheemore.”

If we put “sí” for “she” (i.e. woman) in front of a word like “uaimh” (cave), we’d end up with “sí-uaimh,” which would start to sound suspiciously like a possible fairy dwelling, instead of a room set up by a woman for “ceardaíocht” or “tiomsú i leabhar gearrthóg.”  Context should tell us that the phrase is supposed to mean “she-cave,” but what if the context is unclear?  And what if fairy women have taken up scrapbooking and need their own space for it?  Sí-sí-uaimheanna?  Or “sí-uaimheanna sí?  And one fairy woman’s she-cave?  Sí-uaimh sióige?  Well, that’s food for thought.  On that note, let’s scrap the “gearrthóga” (scraps, clippings) and go for the “greadóga” (appetizers), since, after all, ’tis the season …