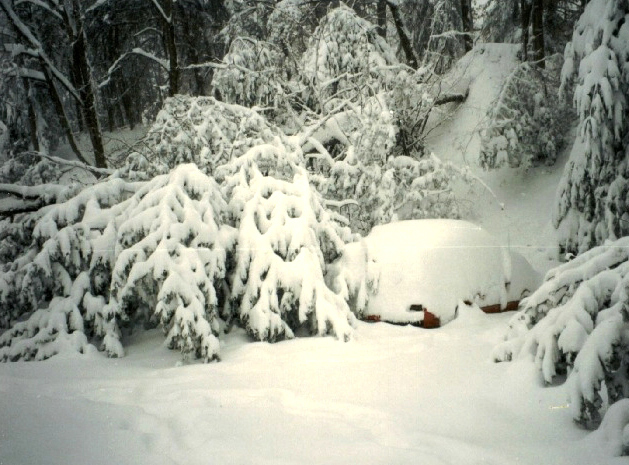 As we read about the unusually cold winter weather this year (le deich n-orlaí sneachta in Iarúsailéim, fiú), one word that really caught my attention was “bombogenesis.” And any time a relatively new English word catches my eye, I always wonder about the Irish equivalent.

So I’ve checked the usual channels for ‘bombogenesis” in Irish but with no results.  However, that doesn’t mean we can’t explore the possibilities, looking at the root words involved, “bomb” and “genesis,”

And a little background is always interesting.  Calling certain weather storms “bombs” apparently began in the 1940s and 50s (http://en.wikipedia.org/wiki/Explosive_cyclogenesis). The late professor Frederick Sanders of MIT contributed further to the vocabulary by using such terms as “explosive cyclogenesis” and “meteorological bombs” in publications in the 1970s and 80s.

Technically, “bombogenesis” refers to a rapidly developing storm in which the “córas lagbhrú” (low pressure system) drops “ceithre mhilleabar is fiche” (24 millibars) in “ceithre huaire is fiche” (24 hours).  Milleabar an uair, suimiúil (although the rate might not be that regular).

As for any further “mionrudaí meitéareolaíocha,” I’ll leave that to the “meitéareolaithe” on the list, if they care to add “níos mó tráchtaireachta.”

So now, we’ll just look at the word “bombogenesis” itself, and its relation, if any, to “Genesis” as in “The Book of Genesis.”  By default, that probably tells you that “-genesis” as a scientific suffix and “Genesis,” as such, are not exactly the same in Irish.

a) The “bomb” part is straightforward enough:

an bhuama, of the bomb

na mbuamaí, of the bombs

Not that we’ll really need all those forms for today’s purpose, but we may as well be complete.

Although I’ve yet to find “bombogenesis” or “cyclogenesis” in Irish, there are many scientific terms with this suffix, such as:

In fact the only scientific term I’ve found so far that doesn’t use “-ghineas” for this context is “diagenesis,” which apparently is “carraig-ghiniúint,” slightly more like saying “rock-generation.”  If that’s really any different from “rock-genesis.”  Food for thought, but for lá éigin eile.

So presumably “bombogenesis” in Irish would be “*buamaigineas.”  I’ve Googled and Yahoo’d it but so far these search engines yield no hits.  Maybe na hamais are waiting in the wings, until someone decides to comment on the intensity of the recent storms in Irish.

A third aspect of this question, when approaching any translation issue, is how does the new term relate to other major vocabulary for the concept.  In Irish, “The Book of Genesis” is “Leabhar Geineasas.”  The word “geineasas” is longer by one syllable and spelled slightly differently from the suffix “-g(h)ineas,” although they’re clearly related.  As to exactly why, that’s probably a matter for na diagairí, na heolaithe, and na teangeolaithe, but for our purposes, it’s sufficient to say that “Geineasas,” as such, isn’t used to create these scientific compound-words.

Next up, I guess I’ll have to look into why we have both “cuilithí” and “guairneáin” when discussing … hmm, can you name it?  And which word do we use for the “polach” and “impholach” types, as opposed to the types which are “ceangailte” or “tosaithe.”  Or the “crú capaill,” type, which should be a nice segue back into some rural Ireland, pastoral life topic.  Why?  Check out the “gluais” below and stay tuned for more.  SGF – Róislín

Gluais: amas, hit (in Internet searching, etc.); *buamaigineas, bombogenesis (asterisked here because as far as I can tell, I’ve coined it); ceangailte, bound; crú chapaill, horseshoe; impholach, circumpolar; polach, polar; tosaithe, usually “(having been) begun, started” but here “(having been) cast off”

Champing at the bit for “cuilithí” and “guairneáin“?  OK, they mean “vortices.”