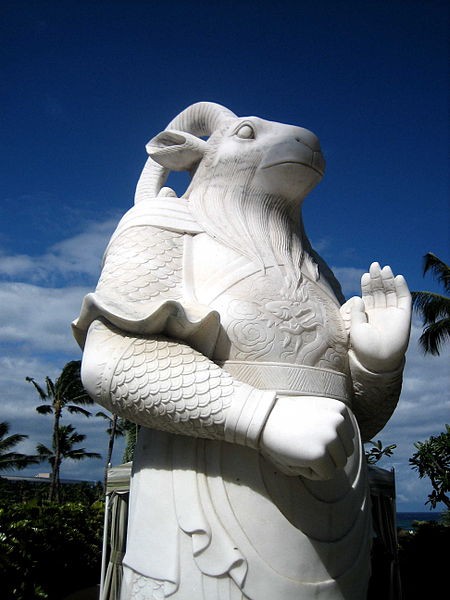 Because unlike previous years, 2015 offers us two, perhaps even three, animals as the symbol for the year.

But choosing between animals would mostly be vocabulary, not grammar, right?  Like “sheep” vs. “goat”?

Since English doesn’t have grammatical gender, except for pronouns and a handful of inanimate objects (like ships), there’s no difference in the “of the” part of expressions like “the hat of the man” and the “hat of the woman.”

But in Irish, for these Chinese New Year animal symbols, we need to know the grammatical gender of the animal involved.  Biological gender (ermm, sheep vs. ram) isn’t an issue here.

The original Chinese is 羊 (pinyin: yáng) which apparently refers to both sheep and goats.  As for why “ram” is sometimes specified, and other times “sheep,”  I don’t know, but if there’s anyone on this list who also knows Sínis, perhaps you could help us out.  A Yu Ming (aka Daniel Wu), cá bhfuil tú (when we need you)?

Anyway, here’s some of the basic vocab for all three animals.  I’m saving the “tuiseal ginideach” as a challenge for the fill-in-the-blank part.

an gabhar, the goat

It does seem like this is a real translator’s dilemma.  Which to pick, since the Chinese usage itself seems to vary?

But let’s go ahead and try all three (The Year of the Goat, The Year of the Sheep, The Year of the Ram).   The phrases below include the exact number of letters needed so watch out for any inserted letters or added endings.  Freagraí thíos, mar is gnách.  I’ve also added slightly more space between the words, just to make the layout clearer.

Now, to go above and beyond the call of duty, and just for practice, let’s put the animals in the plural.  And that will take us to the Irish “tuiseal ginideach, iolra.”  Here we go!

I’ve lower-cased these last three because they wouldn’t come up in the Chinese calendar as proper nouns, fad m’eolais at any rate.  My understanding of the tradition is that it’s always one animal per year.