An ‘-gate’ is déanaí–Ariana agus na taoschnónna Posted by róislín on Jul 13, 2015 in Irish Language 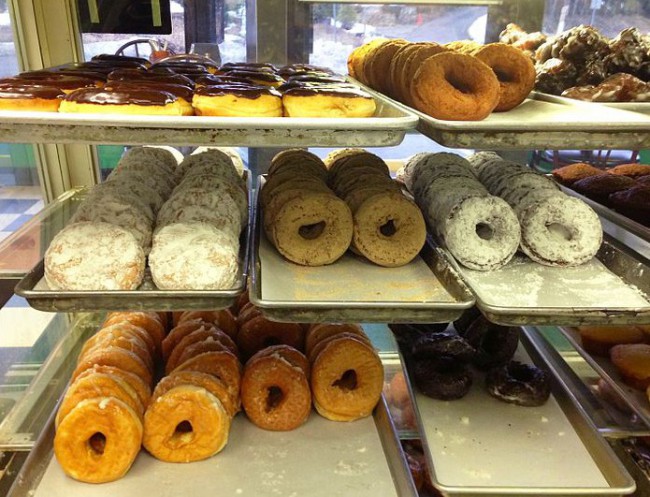 As I mentioned previously (nasc thíos), when discussing “Bridgegate” and “Watergate,” the “-gate” element doesn’t translate well into Irish, since the meaning is so nuanced.  To actually discuss “Watergate,” or many of the other “-gates,” we could use a word like “scannal” (scandal).

But, still, the new “-gate,” gives us a nice opportunity to discuss another Irish vocabulary word, namely “taoschnó” (doughnut).  “Taoschnó” is a fairly new word in Irish, as far as I can tell.  A quick survey of various reference works shows no use of this word before 1959.  It seems quite likely that the word was coined for the English-Irish Dictionary around that time.  Let’s look at the component parts (taos, cnó) of the word, and then the compound word itself.

Here are the basic forms for “taos” [pronounced “teess” or “tayss,” depending on dialect]  and a few related words:

an taos, the dough

“Taos” doesn’t normally have a plural, although it wouldn’t surprise me if within the baking industry or in baking contests, someone might improvise a plural.  For that matter, it doesn’t normally have a plural in English either, although we may occasionally see “doughs.”  Normally English would use phrases like “types of dough” (cineálacha taois) or “pieces of dough” (píosaí taois), etc.

Remember also, when capital letters are involved (titles, signs, etc.), that “An Taos” would be completely different from “An tAos” (with the prefixed lower-case “t”).  The latter is from the word “aos” which has various meanings, like “folk,” “people,” or “class of people” (e.g. an t-aos óg míshásta, disaffected youth).

As for “nut,” here are the basics:

an cnó [un knoh, the “k” sound is pronounced], the nut

an chnó [un khnoh, with the “kh” sound of “chutzpah”], of the nut.  Note: this spelling (chnó) ends up looking like the second half of “taoschnó,” but it’s for a different grammatical reason.

And for the “c(h)nó” part of “taoschnó,” well, of course, most doughnuts have nothing to do with actual nuts, but apparently one 19th-century recipe called for filling the doughnut hole with nuts.  And why the “hole” in the doughnut to begin with?  There are various theories, but one reasonably plausible one is that the center of a “doughnut” without a hole would take longer to bake.  Apparently it was more efficient to bake them with the hole cut out.  Same principle as the Bundt cake, I suppose.

But whether there’s any logic to the “-nut” element in the word “doughnut” or not, “cnó” (nut) was used to create the Irish word.  There’s also lenition, changing the “c” to “ch,” since it’s the second part of a compound word:

an taoschnó (same as above), of the doughnut (luach an taoschnó)

And if you didn’t catch the actual scandal connected with Ariana in the doughnut shop, apparently she licked a bunch of doughnuts that were meant to be sold to customers.  So we could wrap up this post with a few choice questions and statements like:

An lífidh [say: LEE-hee] Ariana níos mó taoschnónna tar éis an scannail seo?  Ní dóigh liom! (oh, I would so love to make that “ní ‘dóigh-nut’ liom,” but, see, I’m only treating that as a side-bar)

Rather than answer these here, maybe we could get some answers sna nótaí tráchta.  Or feel free to use these as conversation starters in whatever ciorcail chomhrá Gaeilge you participate in.   It’s sure to be a “comhrá beomhar“!