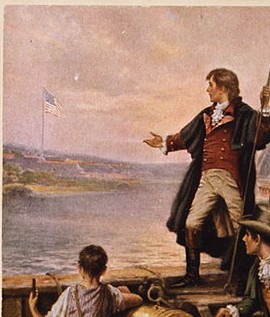 So far, we’ve looked a little closer at the Irish word for “spangle” and at when “spéir” (sky) becomes “spéartha” (skies), based on ”Ó Abair An Léir Dhuit” (the Irish version of “The Star-Spangled Banner”).  Before we leave the topic for this year, let’s take a closer look at a couple more “focail shuimiúla” from the Irish text.

1) míniú: In Véarsa 1, we see the phrase “Ag luascadh go huasal ‘s ag míniú ár gcroíthe” which corresponds to, but doesn’t exactly translate: “O’er the ramparts we watched, were so gallantly streaming.”

So how does “míniú” work here?  Normally, it means “to explain,” as in, “An féidir leat an frása sin a mhíniú?”   This doesn’t really work with “croíthe” (hearts) as we see in our song text.  So let’s look at the core of the word, “mín.”  It has a variety of meanings, most typically “smooth,” but also the following: polished, soft, delicate, fine (in texture, consistency), small, and gentle.   So the idea is apparently more like “making our hearts smooth,” which I interpret here as “relieved” or “comforted.”

And how does any of this relate to the original English, which doesn’t mention the word “hearts” at all?  I’d say that the “comforted hearts” are in response to the gallant way in which the “stars and stripes” were streaming (still flying).  Poetic license of translation constantly applies.

And now our “dara focal“:

2) ceonna: In Véarsa 2, we see “c(h)eonna,”a relatively rarely used plural form, from “ceo” (mist, fog, haze), in the line “ Ar an trá thall, go doiléir i lár cheonna na dtonn” (On the shore dimly seen, through the mists of the deep).   This is another concept, like spéir, where it’s hard so say what’s singular and what’s plural.  At least, maybe with “mists” we can look at the word as meaning recurring mists, that come back again after they clear up.  With “spéir / spéartha,” though, it’s not divided into countable segments  and there’s never really a time when the sky goes away and comes back again (at least I hope not!).  In this song, however, it’s not really various mists for various days, just the mists that appeared on one specific day (13-14 Meán Fómhair 1814).  So maybe the idea is just the various swirling patterns (patrúin ghuairneánacha) in the air.  At any rate, the word “ceo” here shows up as plural (“ceonna“).

But why “ch” at the beginning (cheonna), and not just “c” (ceonna)?  In other words, why “lenition”?  The full phrase is “i lár cheonna na dtonn” (lit. “in the middle of the fogs of the wave”).  This type of phrase is known as the “double genitive,” since we have “middle of” and then “fogs of.”  Typically, the first noun in the “double” genitive is simply lenited, not actually genitive, so a basic example would be “hata fhear an tí” (the hat of the man of the house).  The “hat of the man,” with no “of the house,” would be “hata an fhir,” with the “-ir” ending (genitive case).    Another example would be “hata bhean an tí” (the hat of the woman of the house), while “the woman’s hat” (with no “of the house”) would be “hata na mná.”  The further intricacies of the genitive case will have to wait for blagmhíreanna eile, but for now and for this specific phrase, suffice it to say, “cheonna” [HyOH-nuh], not “ceonna” [KyOH-nuh].

Before we leave the word “mists,” let’s look at one of the most popular expressions using “mists” in English and see what it would be in Irish (since the Irish uses neither “ceo” nor “ceonna“).  Here are two possibilities for the Irish, with the specific number of blank letters to be filled in (freagraí thíos):

One thing that’s clear is that neither example can accommodate the word “ceonna,” or even “ceo.”  So these phrases use a completely different set of words to convey the idea.  And what idea is that?  Hint: the first one can also be translated as “a long time ago” and the second one as “a long long time ago.”

So what are the actual Irish phrases and what comparable English phrase includes the word “mists”?  Freagra thíos, as I noted above. 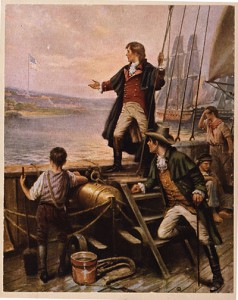 Well, this gluais to the existing gluaiseanna  (naisc thíos) could go on much longer (i bhfad níos faide), but this seems a good time to pause, at least until next year’s Flag Day and July 4th season.  Maybe in 2016, we’ll tackle such timely words as “swag” and “bunting.”  And no, that’s not the Australian “swag” (a ditty-bag) and not the “bunting” bird.  So what are the Irish words for “swag” and “bunting” in the context of decorations?  Can you wait about 11 1/2 months  — see you then with the answers.  But, of course, see you “roimhe sin” with a lot more interesting topics.  Right now, I’d say something to do with “taoschnónna” and “geataí” is brewing.  SGF — Róislín

Freagraí: (for the English phrase with “mists,” in the plural)

And what difference is there, really, between “a long time ago” and “a long long time ago”?  Diabhal a fhios agam.  Maybe we should ask George Lucas how he wants “A long time ago in a galaxy far, far away” to be translated into Irish.  Or if it has already been, what was chosen for the subtitling?  Anyone know?

And yes, this “fadó” is the same word we see in the name of the restaurant chain that started in Atlanta in 1996 (http://www.fadoirishpub.com/atlanta/).  Presumably they chose the name because it evokes tradition and “long ago” foodways — and it’s a lot easier to market than a phrase like “i bhfad ó shin.”  By the way, I’ve always enjoy my “béilí” there.  And as for their boxty offerings, ní hiad bocstaithe do sheanmháthar iad!

By the way, we can double up the “i bhfad-anna” if we want to really emphasize the amount of time in a phrase for “long ago”.  So example “a)” could become “i bhfad i bhfad ó shin” (a long long time ago).  Which simply gives us more options.

Naisc: The links for the other blog posts in this series are: