‘Bluebell’ or ‘Broadbrand’: Which Word Should Be in a Children’s Dictionary? — A British Example and Irish Question Posted by róislín on Aug 20, 2019 in Irish Language 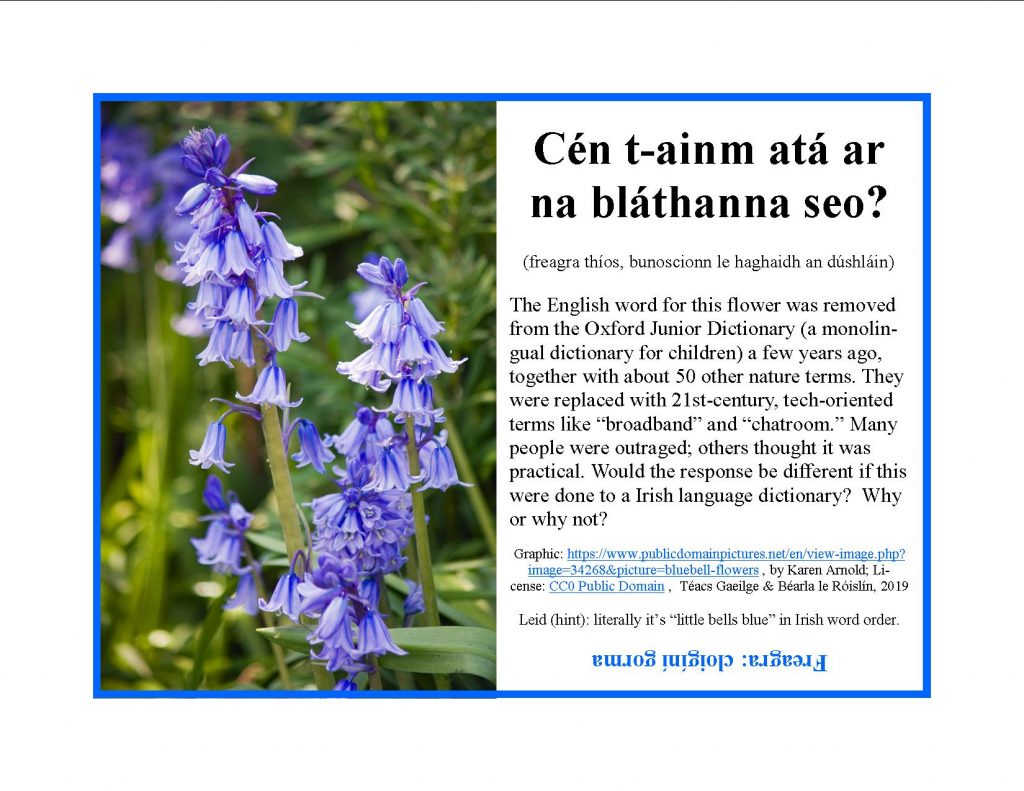 As far back as 2009, many people noticed that the Oxford Junior Dictionary, a monolingual English dictionary for children seven years old or thereabouts, dropped approximately 50 words about nature so they would have room for more 21st-century tech-oriented words.  While I can sort of understand the logic, I wonder if perhaps hundreds of definitions could have been trimmed  slightly instead, to make room.   In this era of 140-character sound bites, we’re used to trimming our texts so the dreaded red “-1” (or higher) warning doesn’t show up.  As long as you’re even -1 (or 1 character over the limit), many online forms will not post or send your message.  And, these days, we’re not counting “words” as such, in many cases, but characters, including blank spaces and punctuation.  So if we’re used to such tweaking, maybe enough space could have been made to add the new words while keeping the more traditional ones.  Didn’t we use to sing “Make new friends, but keep the old …”?

At any rate, no use crying over spilt milk (or, to use an Irish near-equivalent:  Níl maith a bheith ag gol in áit na maoiseoige).  Whether the OJD could have trimmed a bit here and there, here a nip, there a tuck, we may never know.  But what we can do is make sure those deleted words (like bluebell, dandelion, willow, etc.) are not forgotten, in English, Irish, or any of the world’s other languages (and there are about 6000 of them).  The 50 or so deleted words from the OJD have been heralded in the social media, a 21st-century, high-tech phenomenon which, ironically we’re using to discuss this very issue.

Of course, the Oxford Junior Dictionary is a monolingual English dictionary, probably not much like what most adult Irish learners are using, but the situation provides us “ábhar machnaimh.”  What should we be learning first when we start a new language?  While I don’t have a ready answer for that, I do plan to look at the Oxford deleted words and line them up with their Irish equivalents to see which ones seem to be well represented in our pedagogical materials and which ones are not.  Of course, there are all kinds of demographic specifications that should be part of such a study, and my approach will be necessarily streamlined, but I still think it will give us some interesting insight into nature terms in Irish.  In general, I’ve always been impressed by how prevalent some of these words are in Gaeltacht literature and in textbooks, although the trend may be changing.  In particular, I was always touched by a sentence I remember from years ago, something like, “The weak lamb is not eating,” (IIRC, in Irish it was: Níl an t-uan lag ag ithe; I’ll have to track that down sometime  — cén leabhar a raibh an abairt sin ann, an cuimhin le duine ar bith?)

This project will take a while, probably creating a “sraith” of these “blaganna,” to go through the list, but I thought I’d start today with “bluebells” vs. “broadband,” partly just because I love alliteration!

So, to get to the actual Irish words: as the graphic above hints, the literal word order for “bluebells” in Irish is “little bells blue,” or maybe that should even be “bells-little blue,” since the “little bells” part is one word, using a suffix.

The Irish for blue?  “Gorm” (pronounced with two syllables, not like English “worm” or “gormless” or Star Trek’s “Gorn” — couldn’t resist that one, even though it’s “n” not “m”).

Put it altogether and you’ve got bluebells: cloigíní gorma (clog + slenderization/inserting “I” + suffix “-ín” + plural ending “í” followed by “gorm” plus plural ending “a”).  Piece o’ cake, or to use a more Irish expression, “éasca péasca.”

As for “broadband,” I don’t deny it’s useful as a term.   That said, I don’t really know how much the 7-year-old target audience for the Oxford Junior Dictionary really uses the word, but the OJD’s editors say they made their selections based on children’s usage.   The Irish for “broadband” is, quite straightforwardly “leathanbhanda” or “banda leathan.”  So, if you had to choose, which would you rather learn first in Irish – cloigíní gorma or leathanbhanda?

Of course, I acknowledge that dictionaries for adults probably don’t have the word-count restrictions that printed books for children do, so probably we can learn both words easily – but how quickly?  We can’t learn an entire vocabulary overnight, so either we prioritize or someone does it for us (textbook writers, YouTube artists, lexicographers, language bloggers, etc.).   And the online dictionaries are only limited by the storage capacities of their websites, which seem to be enormous, which is a great advantage over print (bibliophile that I am / cé gur mór an leabharbhách mé).  But I still think it’s worth considering, what would the reaction in the Irish language community be to the systematic removal of words related to nature (which btw is “dúlra” in Irish), from language-learning resources to make way for téarmaí teicniúla? Do bharúil féin?

I can’t help wondering if the same fate has befallen the Oxford Australian Junior Dictionary and the New Zealand Oxford Junior Dictionary.  Billabong?  Wallaby?  Bilby?  Kiwi (no way you could get rid of that, I think)?  Moa?  Tuatara?  Or other dictionaries, monolingual or otherwise, in other languages?  And now I’ll have to look further into trends in the world of “foclóirí Gaeilge,” most of which are bilingual, and few of which are just for children.  In fact, adult learners probably constitute a huge market for all kinds of Irish dictionaries today, whether it’s a hard-copy book we actually buy (remember doing that?) or a free app.  So what do adult learners want to learn first – if they have to prioritize – the Irish for “bluebell(s)” (cloigín gorm, pl. cloigíní gorma) or the Irish for “broadband” (leathanbhanda OR banda leathan).  As readers of this blog, your thoughts are especially welcome.  Personally, I would always like to know as many realms of vocabulary as possible, from “abach” (entrails) to “Zúinis” (Zuni language).  But, of course, “I ndiaidh a chéile a thógtar na caisleáin,” the Irish equivalent of “Rome wasn’t built in a day.”  We do have to prioritize – caithfidh muid rudaí a chur in ord tosaíochta – but hopefully, ultimately, there’s room for just about everything, including interesting words like “tracklement,” for which I just learned the Welsh – it’s simply _defined_ as “jeli” although I see it _described_ as a “savoury condiment” like mustard.  Hmm –thereby, no doubt, hangs a tale, or at least a chutney, but, to paraphrase the much-loved Myles “is scéal do lá éigin eile é scéal na tracklements.”  Ceist faoin fhocal ‘tracklements‘?  Féach an nóta thíos, ldt.

PS: An nóta: perhaps I could even go so far as to follow Myles na gCopaleen’s  Gaeilge-go-Béarla orthography, as evidenced in his phrase “na dibheairseans agus na haidbhintiurs” and say “scéal na dtraicilmintí,” and yes, afaik, that is a totally made-up Irish spelling, but hopefully it will be read in good humor.  Na gCopaleen (aka Flann O’Brien, but really aka Brian O’Nolan akaX2 Brian Ó Nualláin) glossed his terms as “scléip” (for “dibheairseans“) and “eachtraí” (for “aidbhintiurs“).  I imagine many readers of his An Béal Bocht will agree that this is one of the most hilarious examples of foclaíocht in the history of Irish foclóireacht.  Or maybe we should call it “bréagfhoclóireacht” (“pseudo-lexicography).”  Of course, almost every line in Na gCopaleen’s úrscéal is one of the most hilarious lines I’ve ever read i litríocht na Gaeilge, so it stands to reason that even Na gCopaleen’s footnotes are greannmhar (funny).

BTW, if anyone wants to read a little more about a typographical mystery in An Béal Bocht, you might like to check out my April 20, 2015 blogpost: Mistéir an Fhrása ‘ó chorchtacht’ [sic] in ‘An Béal Bocht’ — Réitithe (An Irish typo — solved)