Nature Words: Should They Be in a Children’s Dictionary or Not? Let’s Consider the Irish Word “dearcán” (acorn) Posted by róislín on Aug 31, 2019 in Irish Language 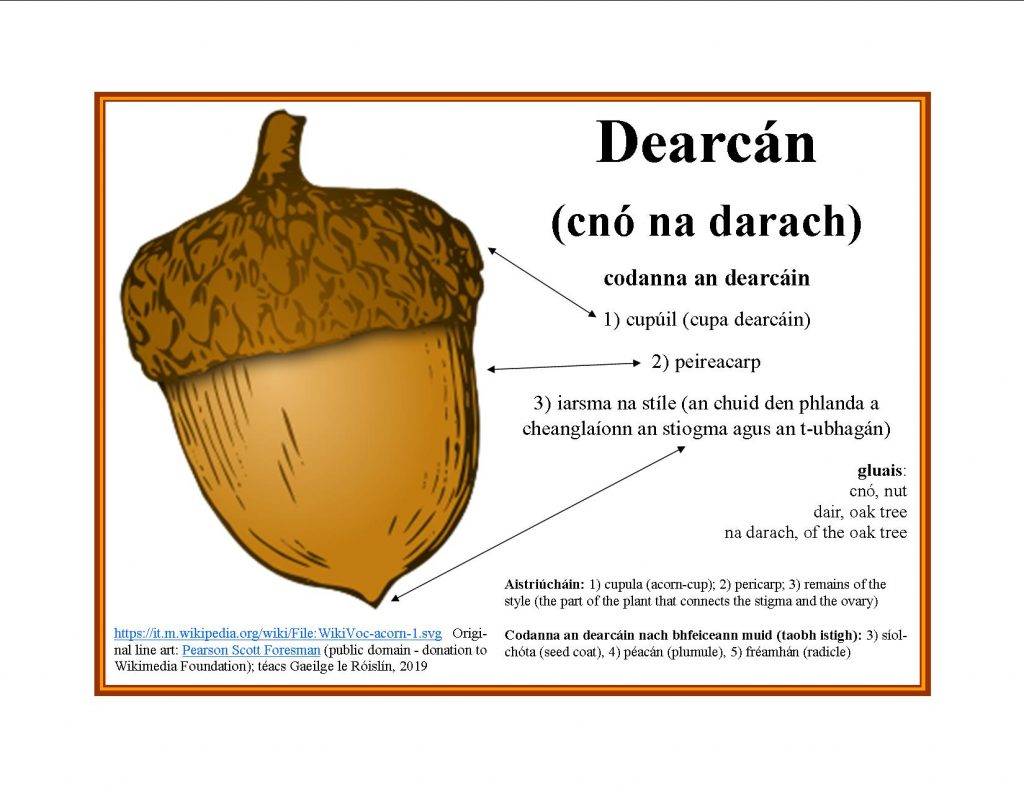 The background to this question started around 10 years ago when the Oxford University Press removed “acorn,” and about 50 other nature terms (bluebell, buttercup, minnow, etc.) from the Oxford Junior Dictionary (OJD) and replaced them with tech and social media terms like “broadband” and “chat room.”  Admittedly, this is a children’s dictionary with a fixed vocabulary size (10,000 words), and not the ultimate repository of all English vocabulary words, but the removal attracted a huge amount of attention and controversy.

In a previous blog post (nasc thíos), I pondered what would happen if a similar move were made with an Irish language dictionary.  It has always seemed to me that Irish language instructional materials have an especially strong emphasis on nature terms.  Going back a ways, to the classic Progress in Irish by the amazingly prolific Máiréad Ní Ghráda, I love that learners get two (!) words for “buttercup” (“cam an ime” and the creeping type, “fearbán“) and they learn to answer the question “An lon dubh nó smólach é sin?” (Is that a blackbird or a thrush?).  Can anyone else think of some other good examples of nature terms in their language-learning resources, perhaps above and beyond the real basics, like wind, rain, and sky?

Anyway, back to the acorn, as depicted in the graphic above.  The basic word is “dearcán” and here are its basic forms:

dath an dearcáin, the color of the acorn

na dearcáin, the acorns (if fallen to the ground, for pigs, etc. to eat, they are “dairmheas” or “meas darach,” oak-mast, but a full account of “mast” as an aspect of pannage will have to wait for another blogpost.  Pannage? – féach an nóta thíos.  And two other quick points here: this is “dair” (oak), not “dáir” (which you can check out for yourself) and there is another plural for “acorns,” the collective noun “measra,” interesting in that this term has no “oak” element in it at all.

na ndearcán, of the acorns

a)) Dearcán na nDaoine, the People’s Acorn, the name of the bronze sculpture and time capsule now in Phoenix Park. It is part of the “Clár Comórtha Céad Bliain-Éire 1916” and was unveiled by Michael D. Higgins, the President of Ireland, in 2017.  It’s 2.8 meters long and 1.7 meters high, so way larger than life, and it no doubt gives other larger-than-life sculptures a run for their money.  For large nut sculptures (ermm!), we have another “dearcán” (10′ / 3.05m H) in Raleigh (“City of Oaks”), North Carolina, and an “ollchnó piostáise” in Alamogordo, New Mexico (30′ / 9.14 m H).  And for the ultimate giant roadside sculptures experience, check out Casey, Illinois, which has an oll-oll-ollchathaoir luascáin (56.5′  / 17.22 m H)”  And of course, back in Ireland, there’s always Clochán an Aifir (Clochán na bhFomhórach, aka The Giant’s Causeway, which is, admittedly, a natural phenomenon, but which suggests giants using mammoth-sized bricks to build a road to Scotland, and there’s the “Giant’s Boot” there, to boot.

b)) “As dearcáin bheaga a fhásann na crainn is airde,” as President of Ireland Michael D. Higgins tweeted on 5 February, 2018.  It’s the Irish equivalent of the English proverb, “Mighty oaks from little acorns grow” (interesting word order, for English). Literally, the Irish means, “From little acorns grow the trees that are tallest).

When it comes to acorns, perhaps more than any other type of nut, I have fond memories of using the “cupúil” (cupule, or in more everyday terms, the cap) for miniature woodland picnics, usually with whatever little dolls I had usually nestled among tree roots, which seemed to create a natural sense of doll-sized spaces.  I don’t think I even knew the word “pericarp” (peireacarp) at the time, but I also found a use for that part of the acorn, plus whatever seeds (síolta), pods (faighneoga), wildflowers (bláthanna fiáine), or interesting-shaped little twigs (craobhóigíní a raibh cruthanna suimiúla orthu) I could find.  And I see that some online toy designers are using acorn caps for dolls these days, as well (cúpla nasc thíos)

Here are the three main parts of the acorn that are visible from the outside:

an stíl, the style (in the botanical sense, not the fashion sense); foirmeacha eile: na stíle, na stíleanna, na stíleanna.  I’m sure that as a child, playing with acorn caps I had no idea that there was a specific word for that part of the acorn that connects the stigma to the ovary, since I probably didn’t know those words existed either.

So that’s just the tip of the iceberg of the nature terms stricken from the Oxford Junior Dictionary but, hopefully, still going strong in Irish.  A previous blogpost here discussed “cloigín gorm,” which, as you may recall, was removed to make room for words like “chat room” (seomra comhrá) or “bandwidth” (leathanbhanda OR banda leathan), not that the OJD included the Irish, of course. I plan to continue the series till we finish with all those nature terms, in Irish and in English.

Hmm, “tip of the iceberg,” was it?  The icebergs are melting, anyway, so maybe we should replace that expression with “tip of the Great Pacific Garbage Patch”.  Which at least gives us more food for Irish grammatical thought.  How to say “the Great Pacific Garbage Patch” in Irish? I can’t find it anywhere online so here goes my attempt: oll– (giant, great) + paiste (patch) + bruscair (of rubbish) + Ciúin-Aigéanach (Pacific, as adjective), giving us “Ollphaiste Bruscair Ciúin-Aigéanach” which could be known as OBCA, if my acronym catches on!

Or we could use “dramhaíola” for “of garbage,” from “dramhaíl” (garbage). And/or “an Aigéin Chiúin” for “of the Pacific,” but our phrase is already pretty long.  It would become “Ollphaiste Dramhaíola an Aigéin Chiúin” (ODAC ??). Anyway, I’ll keep checking for pre-existing usages..

So that’s it for today.  Hope you enjoyed the blog and that you will check out some of the links below.  And if you still haven’t had your fill of talking about acorns, you might want to check out some blogposts I posted a few years ago, about squirrels hiding and finding their stash of “cnónna” (nasc thíos). – Róislín

Nóta: “Pannage” i nGaeilge?  I just did a quick search of 10 dictionaries, including Manx and Scottish Gaelic, and couldn’t find it listed as such.  I did find “mesobr” in Welsh, so I renewed my search without using the French-derived term “pannage.”  Lo and behold, there it is: measrú, “to feed with mast”. For more on the topic: https://www.wildlifeonline.me.uk/blog/post/pigging-out-in-the-forest-the-common-of-mast-in-britain

Naisc:  iarbhlag ar an ábhar seo:  ‘Bluebell’ or ‘Broadbrand’: Which Word Should Be in a Children’s Dictionary? — A British Example and Irish Question Posted by róislín on Aug 20, 2019 in Irish Language