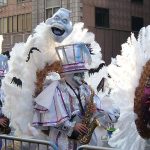 There are three possible words for mummers in the title of this blog, cleamairí, geamairí, and geocaigh.  There’s actually at least one more we could add, “cleathaire,” but that would break the tripartite catchiness of the phrase! (for more on “tripartite catchiness,” please see the note below).

In this blog, we’ll look at these Irish words for “mummer” and see how they compare to the English word.

Let’s start with the English word “mumming.” None of the Irish words share the same original concept, even though all the terms describe the same basic phenomenon.  There are actually a couple of explanations of “mum,” and they may in fact overlap.  The Old French word “momer” means “to mask oneself,” with “momerie” for “mummery.”  “Mum,” as an adjective, means “silent” (to keep mum) and as an interjection, it means “Be silent!”  It’s probably most widely used today in the warning, “Mum’s the word.”

Although it doesn’t seem to part of the standard derivation of “mummer,” I can’t help but notice another possible root as well.  Middle English had “momele” (to make an inarticulate sound), which like German “mummeln” is related to modern English “mumble.”  And by the way, that’s definitely “momele,” not “Mamele,” which some of you may recognize from “Ask the Mamele” (www.forward.com) or from the 1938 movie of the same name, starring Molly Picon, perhaps more well known as “Yente” in Fiddler on the Roof.

Anyway, it appears that the two ideas, being “masked” and being “silent” (and perhaps being inarticulate), have intertwined here, in our modern sense of mummers.  It’s true that, traditionally, they were not completely silent, with various chants, rhymes, and folk drama texts.  But one feature of traditional mummery that one rarely encounters today is “ingressive speech” (speaking while breathing in, giving one a shrill-sounding, wheezy voice).  Part of traditional Irish mumming was for the audience (usually one household at a time) to guess who was behind the mask, and in small rural communities (some of which still have populations of say 30 or 50 people), one would probably recognize one’s neighbors’ voices.  So the voice was sometimes disguised to add to the awe and the mystery of the celebration.  A folk precursor to voice-changer software?  Or to Darth Vader?

So, that’s the idea, or conglomeration of ideas, behind the English word “mummer.”

And what’s behind the Irish words?  In most cases, the key concept is significantly different from “mummer” as such.

First we have some words that pertain to the material aspects of the celebration:

Straw-boys, in English, referring to the costume

Alternately, some of the other words for mummer pertain to the nature of the activity, but not to sound per se:

Cleathaire, alternately spelled “cleithire,” is related to “cleithireacht” (tricking, teasing).  A cleathaire can also be a tricky person or a rogue.

Finally, and to me the most interesting, there is presumably a distant connection between “geocach” (mummer) and the word for a “reed” in Irish, “giolcach.”   The words may appear fairly different but remember two general linguistic principles, a) that “l” is a sort of slippery consonant and not always very audible, and b) that unstressed second syllables, like the “-ach” here (at least in some dialects), tend to drop off, or at least be less audible.  We have a possible connection between “geocach” and “giolcach” via words like “geoc” (a reedy, piping voice) and “geocaíl” (piping, squeaking, talking shrilly, silly talk).  It’s not as though this derivation is crystal clear, but it seems reasonable.

Mummering and the house-to-house procession (quête) don’t completely stop with séasúr na Nollag.  As we saw in the last blog, there are also the “biddy-boys” for Lá Fhéile Bríde (1 Feabhra).  In addition, there are May Bush, May Baby, and May Queen processions for Lá Bealtaine (1 Bealtaine), and guisers, “vizards” (“vizard” being an old word for a visor or a mask, originally from French “vis,” face),”hugadais,” buachaillí tuí and “láir bhán” processions, for Oíche Shamhna (31 Deireadh Fómhair).  So no doubt, we’ll revisit these topics in future blogs.

And to wrap up, and to cut to the fun, never mind the etymology, here are two links which will take you to photos or audio clips on the Irish Wren-boys and the Philadelphia Mummers, which I hope you’ll enjoy.

Nóta faoin bhfrása “a thiarcais”: I guess I keep returning to “a thiarcais” because in years of doing Irish, I’ve never found an explanation either from any dictionaries or from other Irish speakers as to what the “tiarcas / tiarcais” part of the phrase actually means.  All I find is how to use it and that the phrase means “My goodness!” or “Oh my!,” plus the fact that it’s lenited and followed by a comhartha uaillbhreasa.  If anyone knows the background to “a thiarcais,” please do write in.   “Item 1 and Item 2 and Item 3, Oh My!” has always been one of my favorite expressions, ever since first hearing the song, “Lions and Tigers and Bears, Oh My!”