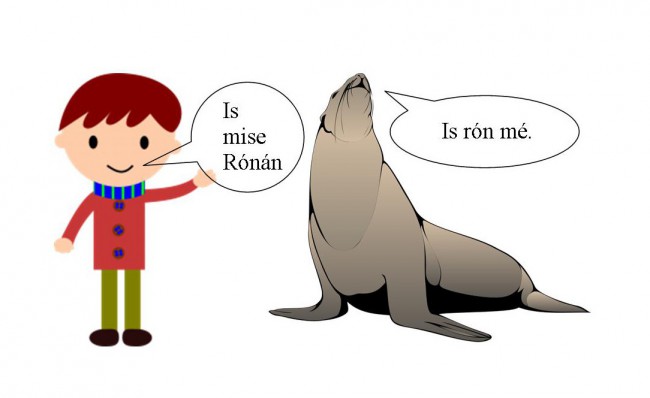 Continuing our look at some Irish given names, here are five more, this time for boys.   I picked these five names since they are interesting from the viewpoint of spelling or meaning.  They range in popularity from moderate (Rónán) to fairly uncommon (Alabhaois).  At some point, I might also do a blog on the top contenders  — probably Seán, Séamas, Seosamh, Liam and Mícheál, but my hunch is that those are already pretty familiar  –  except perhaps for the inflected forms (an tuiseal gairmeach, an tuiseal ginideach).

Alabhaois [AH-luh-weesh], Aloysius, which itself is an Occitan form of Louis.  Latin versions of the “Aloysius” include “Ludovicus” and the impressively spelled “Chlodovechus.”  Its origin is Germanic.  Direct address form — no change: “A Alabhaois!”

Newcomers to Irish might wonder why, if the “bh” sound is pronounced like a “w,” why not just spell it with a “w”?  The answer is that the letter “w” is very, very rare in Irish.  Throughout Irish, the sound of the English “w” is spelled either “bh” (an bhó) or “bhf” (bhfuil) or “mh” (a Mháire), so it’s quite logical for Aloysius to be spelled with a “-bh-” in the middle.  In fact, I can’t say that the English spelling of “Aloysius” is very logical — how do we get the sound “wish” out of “ys”?

The letter “w” in Irish mostly occurs loanwords that have been borrowed as is from English or other languages (wadi, wok, wigwam, wassail, wah-wah, boogie-woogie*) and there’s one example in an abbreviation (kw for “cileavata”).  As for actual Irish words, we have  Darwineach, Darwineachas, and Shawach, where the “w” is just being retained from the English names.  Another “w” is retained in the gaming term “pwnáil,” which suggests that at some point we’ll see an Irish word for “pwnage,” which presumably would be “*pwnáid,” to go ahead and coin it since I don’t see it anywhere online.  Another word to keep an eye out for!

Speaking of the name “Alabhaois,” can you figure out which famous Irishman would have written his name this way, if he had been using Irish:  Séamus Agaistín Alabhaois Seoighe.  Freagra thíos.

Éadbhard [AYD-ward], Edward.  Here the “w” spelling has been Gaelicized, becoming “-bh-.”  Direct address: “A Éadbhaird!” [uh AYD-wirzhdj, note the slender “r” and “d” pronunciations at the end of the word].  Meaning: from the Old English “ead” (wealth; prosperous) and “weard” (guardian, protector, perhaps related to “warden” and thus “ward”).  No relation to the Irish word “an bard” (the bard/poet) or “an bhaird” (of the bard/poet), although they happen to look the same.

Feardorcha [FAR-DOR-uh-khuh, note the guttural “ch” sound as in “chutzpah,” represented by “kh” in the transcript, and the “uh” sound between the “r” and the “ch,” making this a four-syllable word].  Sometimes anglicized as “Fardoragh;” equated with Frederick or Ferdinand.  Direct address: “A Fheardorcha!” [uh AR-DOR-uh-khuh, with the “f” silent].   The actual Irish means “dark or dark-skinned man” but, if we’re looking at the “Frederick” or the “Ferdinand” equivalents, the meaning is from the Germanic. Ferdinand is from “frith” (protection) or “frið” (peace)” or “farð” (journey) and “nanth” (courage) or “nand” (ready) — quite a few combinations to choose from.  Frederick means “peaceful ruler.”

Finally, two that aren’t particularly challenging as far as spelling or pronunciation, but which are interesting nonetheless and which may work better in a North American or other diaspora context (as my friend Ruairí can probably vouch for).

Rónán [RrrOH-nawn, with a flapped “r” at the beginning, like an abbreviated version of the trilled “r” as in Spanish or Welsh, stopping after the first actual trill contact].  There’s no real anglicization of this name as such.  In an English context, the long marks can still be kept but some people might drop them, similar to “Seán,” for example.  In theory, the long mark should always be there, but it’s often dropped.  Direct address: “A Rónáin!” [uh RrrOH-naw-in, not too different but with a slender “n” at the end].   Meaning: little seal (rón, a seal, not the other word “rón,” meaning “horsehair,” in case you happen to find that).

Tiarnán [TchEER-nawn], lord; might be considered a diminutive form, but not as diminutive as the “-ín” ending of “Séamaisín” or “maidrín.”  Based on “tiarna,” lord, also used for “lord” as “God,” especially in prayer.  Direct address: “A Thiarnáin!” [uh HEER-naw-in, with the “t” silent and the final “n” slenderized, as with “A Rónáin!”

Freagra: Séamus Agaistín Alabhaois Seoighe = James Augustine Aloysius Joyce, although I don’t know if he ever signed his name that way.  These days, most people seem to use the spelling “Séamas” but in the past “Séamus” was also common.