How to say “steep slope” and “switchback” in Irish Posted by róislín on Mar 21, 2019 in Irish Language 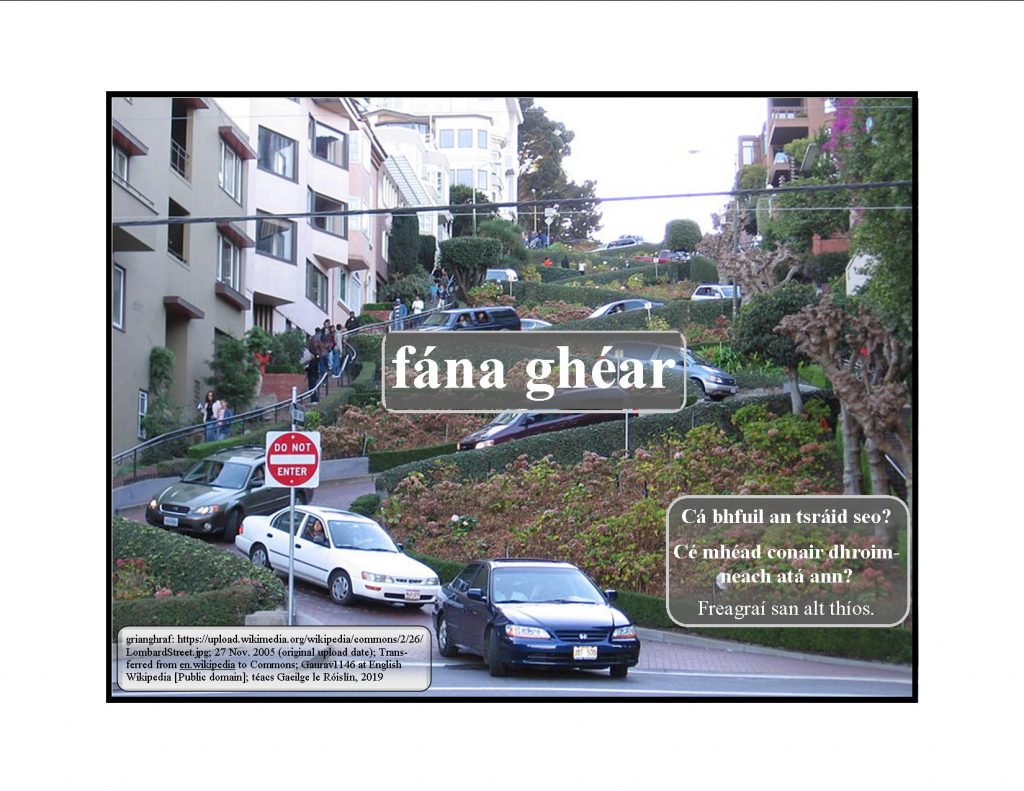 Cá bhfuil an tsráid seo?  Where is this street?  Perhaps you recognized it, Lombard Street in San Francisco.  Not quite the steepest residential street in the word — that honor belongs to Baldwin Street, Dunedin, NZ — but certainly one of the steepest  (ar cheann de na sráideanna cónaithe is géire ar domhan).

“Steep,” as you may have noticed in the graphic is “géar,” with the superlative form “is géire.”  You might remember this word with other meanings in phrases such as “bainne géar” (sour milk) and “uillinn ghéar” (acute angle); it can also mean “sharp,” “shrill,” “keen,” and “cutting.”

“Fána” is a “slope” and also has several other meanings (declivity, hollow, droop).  It is, of course, completely different from the “fána” in the phrase “flóra agus fána,” where it is simply a gaelicization of “fauna.”  Comhainmneacha iad, le barr áidh.

And now, to answer the second question in the graphic above, how many switchbacks are there?  Well, let’s suggest a few answers and see if you can pick the correct one.  There’s actually a method to my madness here, since you can see that we have three different ways to use numbers in Irish (plain, with séimhiú, with urú).

As you can see, answer 1) has séimhiú (c changes to ch), answer 2) has urú (c changes to gc), and answer 3) has no change to the initial letter c.  Which is correct?  See below.

conair (pl: conairí) means path, passage, or trajectory.  Seach-chonair is a bypass.   BTW, no relation to “cónair” (a variant of “cónra,” a coffin) or “conairt” (a pack of hounds).

As for the word “droimneach,” it’s based on “droim” (back, ridge) and can also mean ridged, rolling, or undulating.  As usual, there are more Irish possibilities for these words:

ridged, iomaireach (based on “iomaire,” a ridge).  IMO, more typical for “ridged” than “droimneach” as such

rolling, réchnocach (regarding hills, not stones, or moveable items).  IMO, more specific to hilliness than “droimneach.”  For more on “rolling,” please see the nóta below.

It’s interesting that the Irish for “switchback” doesn’t have any element of the word “switch” or “back” in it.  “Switch” (as a verb) can be expressed by “aistrigh,” “athraigh,” and “bog,” unless it’s in regard to whipping, in which case it would be “lasc” or “fuipeáil or “gabh d’fhuip air.”  “Back” can be “droim” (of human or animal), cúl (of a building or box, etc.), or “ar ais,” if used adverbially, in the sense of returning, as in “Tar ar ais, a Phádraig Uí Raghailligh, go Baile Shéamais Dhuibh,” which would be the Irish title of “Come back, Paddy Reilly, to Ballyjamesduff,” the popular song by Percy French (for more on which, please see the links below).

Hope you found this of interest.  If any of you have ever driven on this road, it would great to hear “do bharúil” (your opinion) of it.  Slán go fóill – Róislín

Nóta> As a matter of interest, for “rolling stones,” i.e. stones that move (as opposed to “rolling” hills that don’t actually roll!), we use “reatha” (of running).  That gives us the seanfhocal (proverb): “Ní thagann caonach ar chloch reatha” (a rolling stone gathers no moss), lit. Moss doesn’t come on a rolling stone, even more lit. “on a stone of running.”  “Moss” is “caonach,” unless you’re talking about carraigín (Irish moss, the seaweed product), which is processed from red seaweed and which is used as a food additive (mar bhreiseán bia).

Naisc: NB: this “mionsraith” is actually a thinly disguised exercise in using Irish verbs, imagining Paddy Reilly’s coming and going regarding “Ballyjamesduff.”  The mini-series addresses both the verbs “come” (tar) and “go” (téigh).