Ten Irish Phrases for Snowflake and Whether They Use ‘Sneachta’ or ‘Shneachta’ Posted by róislín on Feb 28, 2019 in Irish Language 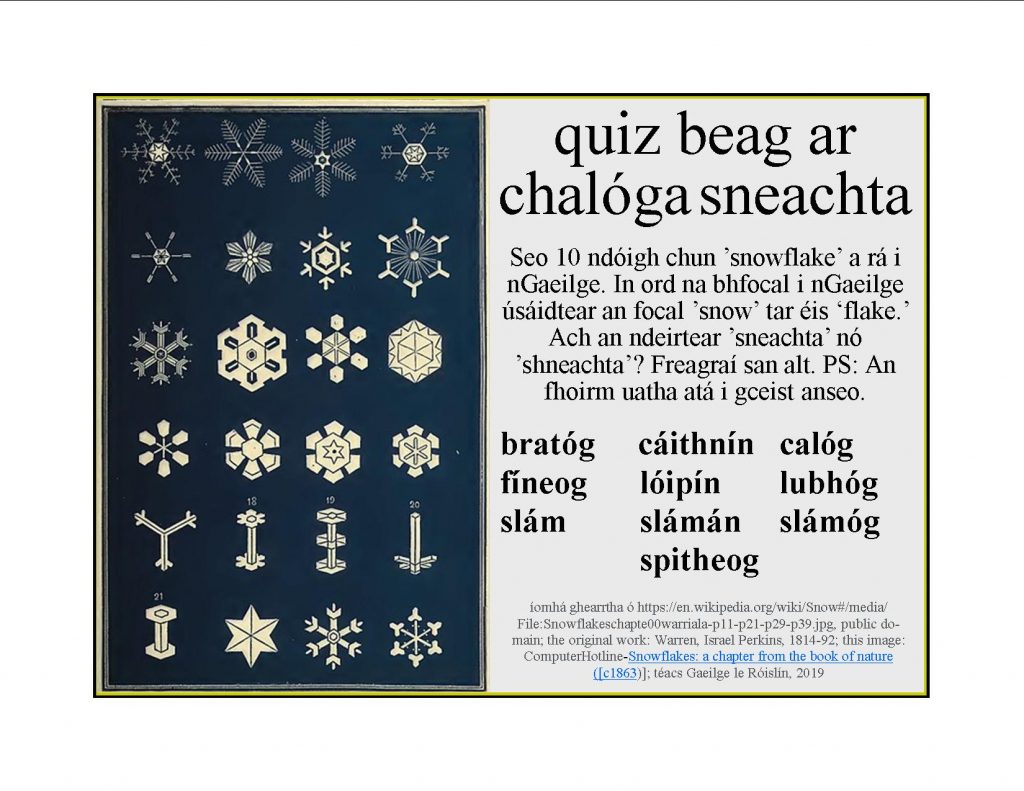 I have to admit that I was surprised at how many Irish words for “snowflake” I found as I researched the previous blog (nasc thíos).  Before we move on to some other topics, I thought it would be good to review them one more time, looking specifically at how to say “a snowflake” (singular) as opposed to “snowflakes” (plural).  This is usually a bit trickier in Irish than in English because in Irish we have to keep in mind the spelling changes caused by grammatical gender (masculine or feminine) and lenition (usually inserting “h”) .  But there’s definitely a pattern, at least as far as these 10 words are concerned.

By the way, I’ve limited myself to the 10 words for snowflake that I think are reasonably the most common.  As you saw in the last blogpost, there are actually even more.  But I think ten is a nice round number for practicing.

So I’ll set the phrases up as a quiz and you can decide as you go whether to use “sneachta” (the basic word for ‘snow’) or “shneachta‘ (the lenited form of the word for ‘snow’).  For good measure, we’ll also practice adding the word “the” to the phrase, which may trigger a few more spelling changes to the beginning of the word for “flake” (remember, like when we say “an bhean” for “the woman,” but just “bean” for “woman,” or “an chearc/cearc” for “the hen” and “hen” respectively).   Unlike some quizzes and word games I’ve done in the past in this blog, where the number of blanks specifically matches the number of letters to be filled in, here we just have plain lines — otherwise I’d be giving the answers away.  The ‘freagraí ‘ will be ‘thíos.’

Now, on to the freagraí.  Of course, you could always have just copied them from the previous blogpost, but then, “Cá mbeadh an dúshlán?”  At the end of the answer key, you’ll find a little summary of the rule that actually makes this exercise quite predictable.  SGF and I hope you enjoyed this dúshláinín beag.  It might also be useful if you’re teaching Irish to beginners — tá súil agam go bhfuil sé úsáideach duit, dóigh amháin nó dóigh eile. — Róislín

7)) slám sneachta; an slám  sneachta.  Remember the advice re: this phrase: it could also mean “a lot of snow,” referring to the entire amount, especially if we say “slám mór sneachta.”

An riail (the rule): If the word for “flake” is grammatically feminine, we use “shneachta” instead of “sneachta.”  “Snow” is being used as an adjective here, so we follow the same rules as for adjectives, namely lenition, just as when we say “ócáid shona” but “lá sona” for “happy occasion” and “happy day,” respectively.   All of the nouns in this list ending in “-óg” or “-eog” are feminine, as they are virtually all the time in Irish (spúnóg mhór, bróg bheag, srl.)

If the word for “flake” is grammatically masculine, we just use the base word “sneachta.”  So that accounts for cáithnín, lóipín, slám, and slámán.  As you may already know, the ending “-ín” is almost always masculine in Irish, even when it’s used for the word for “girl,” as in “an cailín mór” (the big girl).  If somehow the word “cailín” were feminine, we’d have an initial “ch-“, not just a “c” and we’d change “mór” to “mhór.”   There are a very few exceptions to this “-ín” rule, but one fun one is “lachín” (duckling), for which we say “lachín mhór” or “lachín bheag.”  Words ending in “-án” (like slámán) are almost always masculine (arán blasta, cupán mór).  For a word like “slám,” there’s no real clue to the gender, so we have to look it up in a dictionary or deduce it from context.  Phrases like “slám mór airgid” tell us that “slám” is masculine.  Why?  Because the phrase uses “mór” instead of “mhór.”

As for the initial changes to the word for “flake” itself, again, it’s all based on gender.  The feminine ones all take lenition (aka séimhiú), so we have the following: an bhratóg, an chalóg, an fhíneog.  For “lubhóg” there is no spelling change because we do not write “lh” in Irish.  For “spitheog” there is no change because the cluster “sp” is an exception to the lenition rule (as with the “sp” of “an spéir“).  For “slámóg,” the lenition rule changes to prefix a “t” without inserting the “h,” giving us “an tslámóg” (say: un TLAW-mohg, the original “s” becomes silent).  Similarly, you might remember “an tslat” and “an tsláinte.”

Anyway, sin é and I hope you found this interesting, useful, and thought-provoking.  I’m still intrigued by the abundance of words for “snowflake” in Irish, especially since, until recently it seems, snow wasn’t so general or frequent or deep all over Ireland.  Remember, today’s blog only dealt with 10 of the possibilities of words for “snowflake.”  The previous blogpost included a few more, mostly less commonly used, at least in my experience.

Nasc: The Irish Words for ‘Snowflake’ — Calóga and More! (with ‘sneachta,’ of course)Posted by róislín on Feb 20, 2019 in Irish Language