If the other grandmother is “Grandma,” what Irish term can you use? Posted by róislín on Oct 24, 2016 in Irish Language

Inspired by a recent comment from reader Rita C., who noted that Irish has “so many choices for Irish grandmother names,” I thought this would be a good time to review some of the terms.   This blogpost will deal with grandmothers, and we’ll probably have a companion piece for the grandfathers.  Go raibh maith agat as scríobh isteach, a Rita! 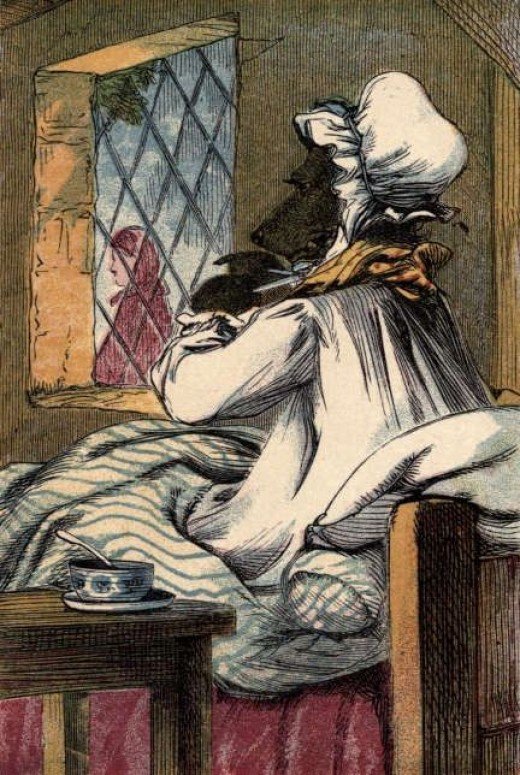 Ní hí seo mo Mhamó. An í do Mhamósa í? And she’s not my meemaw or my abuela or my oma or my nonna, either! (source: archive.org, author unknown (1860) per hubpages.com/education/red_riding_hood)

To me, one of the most interesting things about the “grandmother” and “grandfather” terms is that they are completely different from the Irish words for “grandchild,” “granddaughter,” and “grandson.”  There is no “grand-” element that’s held in common among all these words.  For “grandmother” in the somewhat formal sense, there are three choices that we can add to “máthair” (mother) to create “grandmother”: sean– (as a prefix), mór, and críonna.  Then there are two additional choices which are more familiar and more likely to be used by children: mamó and móraí.  Neither of these two words is literally “grand-” anything.

So how do all of these words work in actual speech?  Here we’ll look at the actual combinations and then at the words in direct address, if you’re actually talking to “grandmother” or “grandma.”

“A Sheanmháthair!” in direct address

3) máthair mhór, grandmother, lit. great or large mother.  “Mór” can also be translated as “grand,” but it’s not “grand” as in the typical sense of “fine” or “elegant.”  Those would be “breá” (fine) or “galánta” (elegant, stylish, genteel)

“A Mháthair mhór!” in direct address

This is the term used in the charming children’s book, Bran agus a Mhamó, the Irish translation of Spot Loves his Grandma, by Eric Hill.  “Bran” is a classic dog’s name in Irish and so replaces “Spot” for the puppy.

Another spelling for is word is “Maimeo,” with “A Mhaimeo” for direct address.

or its English equivalent:

and its English equivalent:

And getting back to “grandchild,” “granddaughter,” and “grandson,” the key word is “gar,” which means “near.”  It also means “approximate,” although that sounds rather technical for talking about children.

Hope this was useful.  Over the years, I’ve gotten lots of requests for how to say “grandmother” or “grandma” in Irish, often for Irish-American families in the United States.  This is especially true when one grandmother has already appropriated “Grandma,” as such.  The parents want a word which reflects their Irish heritage and yet is fairly easy to say.   SGF — Róislín

PS: To read about the fate of one of folklore’s most famous grandmothers, you might like to try “Clóicín Dearg” [Little Red Riding-hood] (Cincinnati: Another Language Press, 2001, ISBN 0922852553, which typically retails for about $2.99.