If the other grandfather is “Grandpa,” what Irish term can you use? Posted by róislín on Oct 27, 2016 in Irish Language 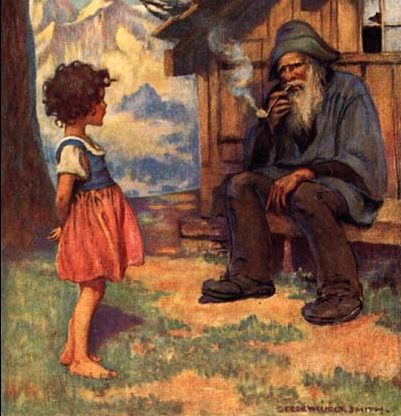 Here, as previously promised, is a review of Irish words for “grandfather,” “grandpa,” and “grand(d)ad,” written as a companion piece to the recent post, “If the other grandmother is “Grandma,” what Irish term can you use?”

As we’ll see, the same three adjectives can be used to create the word “grandfather” from “father” as were used to create “grandmother” from “mother.”  They are “sean,” “críonna,” and “mór.”  There is also the more familiar form, “Daideo,” and at least two more forms that are closer to “grandad,” using “daid” and “críonna” or “mór.”

BTW, in English, there are two acceptable spellings, for the “-dad” variation, “grandad” and “granddad.”  For this post, I’m going to stick to “grandad.”  Somehow, looking at the two-D version always makes me want to pronounce it like the Welsh double-d in “eisteddfod” and “Caerdydd.”

Starting on the more formal side, we have the following for basic forms and direct address forms:

in direct address: “A Sheanathair!” [uh HAN-AH-hirzh, note that the “s” is now silent]

3) athair mór, grandfather, lit. great or large father.  “Mór” can also be translated as “grand,” but it’s not “grand” as in the typical sense of “fine” or “elegant.”  Those would be “breá” (fine) or “galánta” (elegant, stylish, genteel)

4) Daideo [DADJ-yoh] It’s two syllables even though it may look like three; it’s not pronounced like the Beatnik-era “Daddy-O.”

in direct address: “A Dhaideo!” [uh ɣADJ- yoh].  The initial “dh” sound has no parallel in English and it doesn’t have many parallels in the European languages most readers here are likely familiar with.  It’s found in a small number of other languages, including Scottish Gaelic, West Frisian, Lithuanian, most Dutch, and Arabic and in some dialect pronunciations of German “sagen” and Spanish “agua.”  You can hear the sound at the “voiced velar fricative” article in Wikipedia (https://en.wikipedia.org/wiki/Voiced_velar_fricative).  Since this sound can’t be represented well in the Roman alphabet, the symbol /ɣ/ is used, based on the Greek gamma sign. This is also the sound of the “dh” in the Irish phrases “Dia dhuit” and “a Dhónail.”

This is the term used in “Bran agus a Dhaideo,” the Irish translation of “Spot Loves his Grandpa,” by Eric Hill, a companion book to the charming “Bran agus a Mhamó,” mentioned in the last blogpost.  “Bran,” meaning “raven,” is a classic dog’s name in Irish and so replaces “Spot” for the puppy.  With the raven connection, it’s often used for black dogs, not tawny ones like Spot, but it’s not as though dogs named “Bran” have to be black.

in direct address, “A Dhaid chríonna!” [uh ɣADJ  HRzhEE-uh-nuh, with the “dh” and “chr” as noted above.  So that’s six variations on the theme of “grandfather.”  Any more, anybody?

And did you recognize the “seanathair” in the picture above?  ‘S é, is é seanathair Heidi é, san úrscéal Heidi le Johanna Spyri.   In the English translations I’ve seen, she always calls him “grandfather,” not “grandad” or grandpa” or some other familiar form.  Just to mix it up even more, he is also referred to locally as “the Alm-Uncle.”  I think when I read this as a child, I must have thought that this “Alm-” was related to “alms,” that the grandfather wouldn’t accept “alms,” despite his difficult living situation.  Looking further into this character for this blogpost, however, I see that “Alm-” actually means “Alp” as in “Alpine.”  “Uncle” was used because this was a community name.  While he wasn’t technically anyone’s uncle, that we know of, it was kind of an honorary nickname for him.  Apparently in German he would have been either “Alpöhi” or “Almöhi,” and in theory, he could have been called the “Alp-Uncle” in the English version.  Why wasn’t he?  Well, onomastic wonders never cease!  Is “Alm-uncle” considered easier to say than “Alp-uncle”?  Níl a fhios agam.  Maybe someone reading this has some more insight into “Gearmáinis na hEilvéise” (the German of Switzerland).  At any rate, it’s interesting to see the same character referred to as a grandfather (to Heidi) and an uncle (to the community, even though he has distanced himself from it).

Curious, too, that the mother of Peter the goatherd is called “Bridget” in some English translations, but I just checked the German and apparently she’s Brigitte in the original, so I don’t think there’s any implied Irishness.  That would have been a casadh suimiúil (an interesting twist)!

To close, I’ve translated one of Heidi’s lines from English into Irish.  Anyone care to translate it back into English, or any other language you speak?  German would be especially interesting, since that’s the language the book was originally written in.  At any rate, it makes a nice quote, and I could readily imagine it on a greeting card for Grandparents’ Day.  Hmm, maybe I should go into cártaí beannachta as a business!

Nasc: for a little more on the “Dad” (Daid) element of all of this, please see: How To Pronounce ‘A Dheaide,’ ‘A Dhaidí,’ and Other Forms of ‘Dad/Daddy’ in Irish, Posted by róislín on Jun 6, 2013 in Irish Language