Today is St. Patrick’s Day, so today we will discover some relevant vocabulary as well as how the Irish celebrate and the history of the holiday. 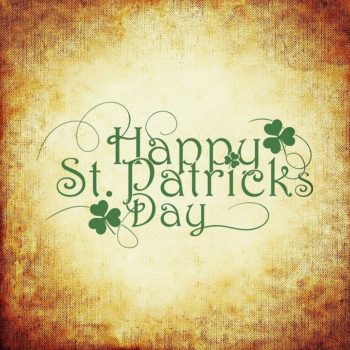 Who is St. Patrick?

St. Patrick is the Romano-British patron saint of Ireland, and is credited with bringing Christianity to the island in the 5th century. He was captured and brought to Ireland as a slave as a teenager, but escaped to return to his family. Eventually he returned as a missionary and became the revered patron saint of Ireland that we all know of today.

St. Patrick’s Day is celebrated on March 17, the day of St. Patrick’s death, in both an originally religious celebration as well as a cultural way to celebrate Ireland as a whole. It is thanks to emigrants, particularly those in the United States, who transformed St. Patrick’s Day into a largely secular holiday of revelry and celebration of all things Irish. Cities with large numbers of Irish immigrants staged the most extensive celebrations, which included elaborate parades. Boston held its first St. Patrick’s Day parade in 1737, followed by New York City in 1762.

Since St. Patrick’s Day is held during the Catholic celebration of Lent, the prohibitions against the consumption of meat were actually lifted so people could feast and drink in celebration, and that tradition continues to today.

“Wetting the shamrock” is an old Irish saying meaning “to go for a drink,” particularly on St. Patrick’s Day, so if you plan on meeting someone to celebrate you can say this:

Cá mbeidh tú ag fliúchadh na seamróige? –Where will you be wetting the shamrock?”

An Irish saying that I find particularly relevant, especially since our last blog post and the discussion surrounding the importance of preserving the Irish language: