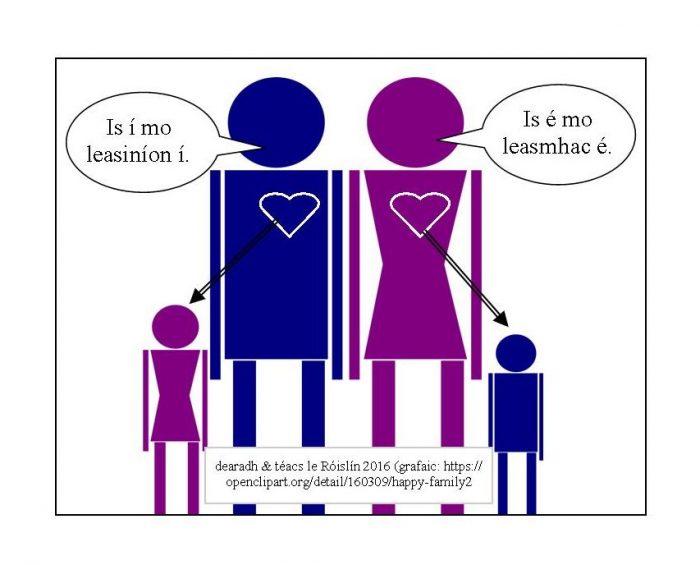 The last entry (for now, at least), in our “leas-” terms series will cover the words “leasmhac” (stepson) and “leasiníon” (stepdaughter).

Probably, in fact, these words will be more applicable for a lot of readers than some of the other “leas-” terms (like “Leas-PhríomhLeabharlannaí” — remember that one?  If not, please see below).  Still, I think it was good practice to see the various patterns that occur after prefixes in Irish.  Unlike English, where we simply apply the prefix and, at most, decide whether to hyphenate or not, Irish is a little more complex.  After the prefix “leas-“, we can do one of the following:

* skip lenition for d, s, t (leasdeirfiúr, leasdeartháir, leas-seanmháthair, and although there’s no realistic word that I can find with “leas-” as the prefix and a noun starting with “t” as the core, that would also have lenition; examples like “seanteach” and “an-te” show a similar “resistance” of initial “t” to lenition)

And now to the heart of today’s blogpost, which is simply the pair of words for one’s “leaspháistí”  or “leaschlann.” From a language perspective, there’s not really much that needs to be said about them, except that they fit the standard pattern with prefixes.  And a pronunciation note for newcomers usually never goes amiss (mh pronounced like w or v):

Depending on one’s role in the family, these “leasmhic” and “leasiníonacha” could be your “leasdeirfiúracha” or “leasdeartháireacha,” in other words your “leas-siblíní.”   As for the word “leas-siblíní” itself, in my experience it’s not widely used in Irish (I got no Google hits for the singular, leas-siblín, and just 3 hits for the plural — torthaí suimiúla!), with “siblín” itself first showing up in a dictionary around 2004, IIRC.  But all of that could be ábhar blagmhír eile.

So that’s the skinny on “leas-” … at last!  Maybe just one final note on prefixes in general before we close for the day.   In any given word, the exact types of changes (or lack of change) depend on which prefix is being used.  So the situation is slightly different for “mí-” as opposed to “dea-” as opposed to “droch-,” etc., but to cover all of these prefixes would be too much for one blogpost.  So, i bhfad uainn an drochrud agus an mí-ádh agus le gach dea-ghuí — Róislín

P.S.  If in the realm of our imagination, there was a “deputy Taoiseach” as such (instead of a tánaiste), that word in Irish would demonstrate the non-lenition situation: *Leas-Taoiseach.  I’m using the asterisk here to indicate that, at least for practical purposes, this is a hypothetical word.  But … hang on a sec!   Lo and behold, Google does give me two hits for “leas-taoiseach,” neither, of course, being official government positions.  One is at http://www.anfearrua.com/topic.aspx?id=965813, in a comment by Dariog, and refers to a title desired after resignation as Taoiseach (!).

The second is actually stranger, in what I assume is a machine-translation of A Princess of Mars, by Edgar Rice Burroughs, at allreadable.com/e263KdT AND at allreadable.com/fc7866zw, both URLs with the prefix ga.  I’m deliberately not including an active link here, because, frankly, I don’t know anything about this site.  Tempting as it would be to read A Princess of Mars in Irish (Yes, I have read it in English!), I’m not tempted to click on the “ga” link because the translation looks pretty sketchy.  I’ll quote it directly and you can make what you will of it: Mo captor, a bhfuil a ainm a bhí Tarraí Tarkas, bhí an chuma ar an leas-taoiseach na pobail, agus fear de cumas iontach mar státaire agus laoch. [sic! for the whole shebang]  I could include the editorial [sic] to illustrate each point separately, but I’d need to use it, let’s see, at least seven times.

I hope this isn’t anyone’s Eye-of-Argon-ish labor of love, because if it is, I suggest getting an eagarthóir who is líofa sa Ghaeilge.  At first glance I see too many verbs per clause, too many definite articles per noun and not enough lenition.  I get a rough translation like: My captor, that his name is was Tarraí Tarkas, the appearance was on the people’s the deputy- …[ hmm, given that this is Mars, we should probably use the original meaning of “taoiseach,” which was “chieftain,” so …]  … deputy-chieftain, and a man of wonderful ability as a statesman and hero.”  The last part is actually almost readable.

In case anyone isn’t familiar with The Eye of Argon, it has its own Wikipedia page, in English, Spanish, and Finnish (no less!)  and about 17,000 hits on the Internet.  And I have it straight from the horse’s mouth that it was alluded to in a Buffy, The Vampire Slayer book.  So it’s not completely obscure.

So much for postscripts being short addenda.  Hopefully it was fun to read at least!