Saying ‘Hi’ to Aoife or Tadhg in Irish: Direct Address Forms for Names in the New Video ‘When You Order Coffee with an Irish Name’ Posted by róislín on Aug 19, 2018 in Irish Language 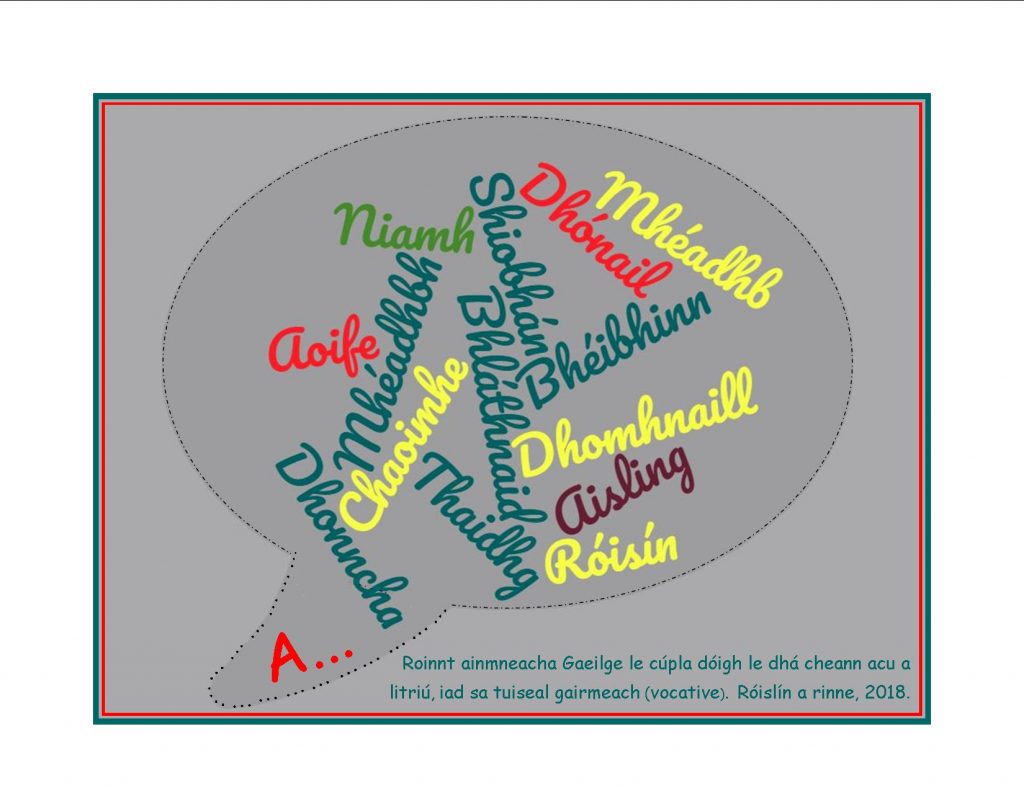 Names like “Caoimhe” or “Bláthnaid” may seem unusual to people outside Ireland or the growing “cibear-Ghaeltacht.”  And this may include baristas ar fud an domhain (around the world), or everywhere the Irish diaspora has spread. This issue was dealt with delightfully in the new video ‘When You Order Coffee with an Irish Name,’ which was discussed in the previous blogpost in this series (nasc don dá shuíomh thíos).  The befuddled barista seems to have no clue about how to spell Caoimhe, Bláthnaid, Aoife, Béibhinn, or a nice “dornán” of other Irish names.

But there’s another aspect to all these names that isn’t addressed in the video – what if you’re actually using the names in direct address?  Not just writing the name on the cup, but calling out to the person who ordered it?  Perhaps protocol would have us just read what we have written, considering the name to be a “text,” but if we consider it a “noun of direct address,” there would be a slight change from the way the name was written.  The Irish name for this feature of the language “an tuiseal gairmeach” (the vocative case).  Latin has this feature as well, but the changes are only at the end of the word, not at the beginning as we find with many Irish names.

Thanks to Shakespeare, we’ve all probably internalized one example of the vocative (i.e. “calling”) case in the phrase “Et tu, Brute?”  Note that the change happens at the end of the man’s name.  After all, we know the guy’s name was really “Brutus,” so why didn’t it bother us more that “Brutus” had changed to “Brute” (2 syllables, btw, not simply a “brute,” as in the generic English word).  But somehow, I don’t recall my English teachers ever mentioning the use of the Latin vocative case here.  I think a lot of us had already heard the phrase, which has become something of a meme or cartoon phrase, long before we had read Julius Caesar, so we didn’t really need an explanation.  How many variations are there of “Et tu, Brute?” in popular culture?  For the tip of the iceberg, see the naisc below.

Anyway, what do we do for direct address with the names from the video?  Here they are, four with no change for the vocative, namely, “Aoife,” “Niamh,” “Róisín,” and “Aisling.”  For those that do change, two things may happen: the letter “h” is added after the first consonant and for certain men’s names, the letter “i” is inserted before the final consonant or consonant cluster (as in Seán / a Sheáin and Séamas / a Shéamais, not that those were on the video, but they’re probably pretty familiar).  The single letter “a” serves as the “vocative particle” and is basically a signal that a noun of direct address is coming up.  It would also be used at the beginning of a letter or email (the salutation), as in “A Sheáin, a chara” (Dear Seán).  Seo an liosta:

Domhnall (which can also be spelled “Dónal”): a Dhomhnaill OR a Dhónail

Béibhinn: a Bhéibhinn (initial “bh” sounds like a “v”)

Bláthnaid: a Bhláthnaid (initial “bhl” sounds like “vl” as in “Vladimir” — I don’t think there are any English words or names that start with “vl” so I had to pick a Russian example.  There’s also Vlasic Pickles, whose founder was Bosnian.  So other languages have this “vl-” sound at the beginning of a word, just not English, afaik)

In the captions but not featured on the screen:

Roisín/Róisín: a Roisín / a Róisín

So that’s the vocative or “direct address” form for the names featured in the video “When You Order Coffee with an Irish Name” (nasc thíos mar a dúirt mé thuas).  If you haven’t watched it yet, you’re in a for a delightful surprise.  And my final bit of pondering on this subject, probably groan-worthy – would the barista fare any better if he were serving caife Gaelach (Irish coffee)?  – SGF — Róislín

2.  an t-iarbhlag: An féidir leat déileáil leo seo? Irish Language Practice for the New Video ‘When You Order Coffee with an Irish Name’ Posted by róislín on Aug 16, 2018 in Irish Language

3. “et tu” mar mhím agus mar fhrása cartúin: And more links than I ever thought I’d find for the “et tu” phrase: https://knowyourmeme.com/memes/et-tu-brute and https://www.cartoonstock.com/directory/e/et_tu_brute.asp (includes a nice “Brutus Salad” cartoon).  And then there’s “Et tu, Cohen?” and “Et tu, Greeley?” and “Et tu, Killbot 9000?” and “Et tu, Ozzie,” and “Et me, buddy” and no doubt many more.  My main point is that this humor is so widespread that we understand it without necessarily having studied Latin or the vocative case.  So this is, at least, a stepping stone to understanding the vocative case (an tuiseal gairmeach) in Irish.  Naisc do na cartúin sin agus don alt sin: 1) https://www.newyorker.com/cartoons/daily-cartoon/monday-july-23rd-et-tu-cohen; 2) http://www.abrahamlincolnsclassroom.org/cartoon-corner/1860-election/et-tu-greeley/; 3) https://www.art.com/gallery/id–0/poster.htm; 4) https://richardnilsen.com/2013/06/14/et-tu-ozzie/; 5) https://www.reddit.com/r/ArcherFX/comments/20o26v/et_tu_brute_et_me_buddy/.  And then there’s the U2 humor (https://www.cartoonstock.com/cartoonview.asp?catref=ggun119 with the caption “U2, Brute” in the rock ‘n’ roll cartoons category.  Not to mention various bits of “ewe two” humor, but now even I would admit that I’m digressing, since so far no “ewe two” humor I’ve seen needs the vocative case / nouns of direct address.

4. And if you want a chuckle, check out “Brits Pronounce Irish Names” at https://www.youtube.com/watch?v=KEdxsLAQA1A.  This doesn’t even attempt to come near the vocative case forms of the names, but several of the names from the coffee video are covered here.  Actually, as I mentioned last time, I don’t know whether to laugh or cry while watching it.  Of course, English, in my opinion, hasn’t got a leg to stand on when it comes to seemingly odd spellings like “rhythm,” “indict,” “gauge,” and “ptomaine”, not to mention odd pairings like “eye/I/aye/fie/my/sigh” or “cough/tough/though/through/bough/lough.”