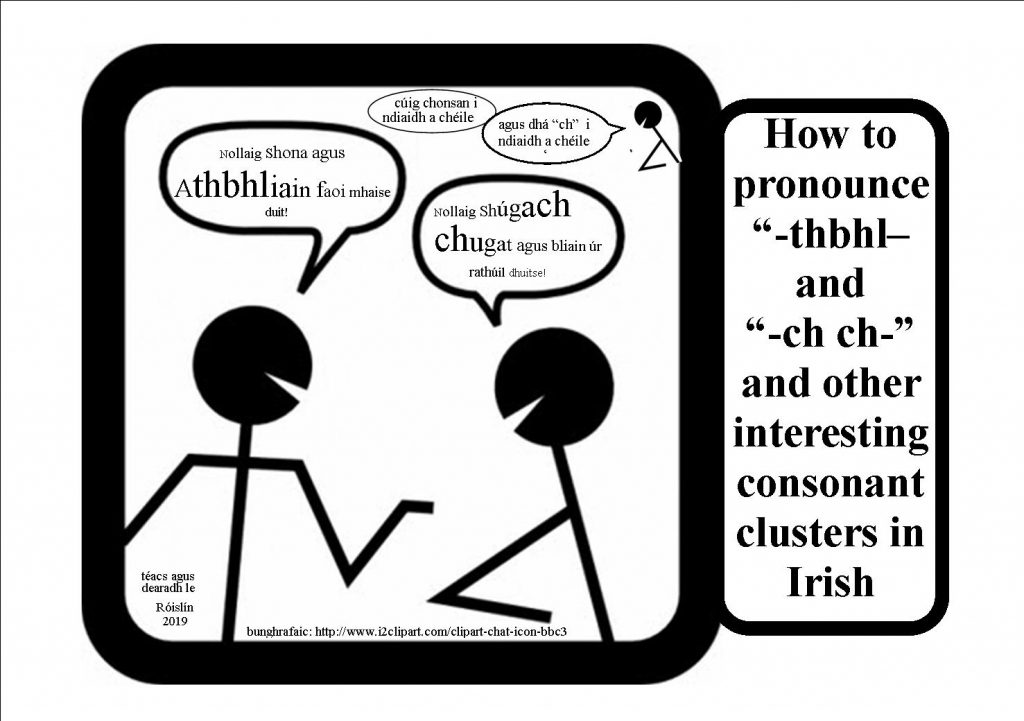 Irish can have up to five consonants in a row, something we rarely encounter in English.  These situations usually occur because a prefix has been added to a word, so the seemingly simple “cleas” (trick) can become “droch-chleas” when we add the prefix “droch-” (bad).  In this case, with “ch” followed by “ch,” we use the hyphen (an fleiscín), so reading the word isn’t too difficult.  But if the second set of consonants is different from the first one, the fleiscín is not usually used anymore (in the past, up to ca. 1950, it was often used).  So, nowadays, we have combinations like “drochbhrionglóid” (a bad dream), from “droch- + b(h)rionglóid” or “drochbhraon” (from “droch- + b(h)raon“).   In both cases, the initial “bhr” sound is pronounced like a “vr”, as in “a Bhriain” or “a bhrat” (his cloak), respectively.

In these examples, the prefix “droch-” has caused a change to the beginning of the second word in all of these cases, so “cleas” became “chleas,” “brionglóid” became “bhrionglóid,” and “braon” became “bhraon.”  This process of adding an “h” is called “lenition,” and happens very, very frequently in Irish.

So how about the combination “thbhl”?  It’s in the graphic above and we’ll add a few more examples below.  Well, of course, we can throw in some vowels before and after the cluster, which will help with pronunciation.  First, let’s look at an example from the recent blog on seasonal phrases:

Once you recognize that “ath-” is a prefix, the situation gets easier.

Then remembering that the second word is really “bliain” (simply with “bl” ), it becomes even more straightforward.   “Bliain” changes to “bhliain” because of the prefix being added, and the new pronunciation is like “VLEE-in.”  “VL” may not be a typical combination in English but we do know it from names like Vlad, Vladivostok, and in the US, Vlasic Pickles.

So when you put it together, “-thbhl-” isn’t really that bad, as long as it has vowels before and after it, as in “athbhliain.”

snáthbhuama, yarn bomb (yarn installation) — that must be a new addition to the language since the concept of the “yarn bomb” was only established in 2005 or perhaps in the 1990s, if you allow for crocheting the “bomb,” instead of knitting it.

thfh: uathfheidhmeach, automatic, which neatly divides into “uath-” and f(h)eidhmeach”; “th” as above; “fh” is completely silent, so “OO-uh-IE-makh” and that’s “IE” as in “pie” or “tried” or “eye”

Naturally, the whole idea of what make an unusual consonant cluster is relative to what you’re used to.  From a variety of languages around the world, we have the following: bdellium, tmesis, kshatriya, Gstaad (town in Switzerland), Nghymru (in the phrase “yng Nghymru,” which may or may not help — it means “in Wales”), dirndl, and Republika Srpska (when I hear it pronounced, it sounds like there’s a bit of a vowel sound between the “s” and the “r”).  I’m sure that to native speakers of these languages, these clusters are perfectly normal.  I’m not really sure what a modern Greek speaker would do with “tmesis” but I guess the ancient Greeks managed it OK.  Gréagach ar bith anseo?  Nó seanGhréagach ag cúléisteacht?

And, of course, seeing the cluster as challenging can sometimes depend on recognizing that two or more parts of a compound words are separate elements.  For example, in English, a word like “Peachtree” (street in Atlanta), shouldn’t present much difficulty, as long as we recognize “peach” plus “tree”.  But if we found a word that started with “chtr”, English-speakers, at least would probably find it daunting.   Ironically, if we’re actually talking about the trees, it’s two separate words (a peach tree).

SGF –  Róislín (taking a short break from the “Nature Words” series, in honor of the season)

PS: In the graphic above, we see another interesting situation.  It’s not a consonant cluster as such, since it’s not one word.  But we do have a phrase with one word ending in a final “ch” and another word beginning with a “ch.”  In English, we have situations like this constantly (crab boat, good dog), and they don’t really present any major difficulties, especially if the context is clear.  But in a new language, it can be tricky when two sounds are repeated.   The first time I tried saying “Nollaig Shúgach chugat,” it felt like a tongue-twister, albeit a short one.   Remember, both of these “ch’s ” have the broad pronunciation, like the Scottish pronunciation of “ch” in “Loch Ness,” the German “das Buch,” or the Welsh “bachgen bach.”