(le Róislín, taking a short break from the “Nature Words” series, in honor of the season) 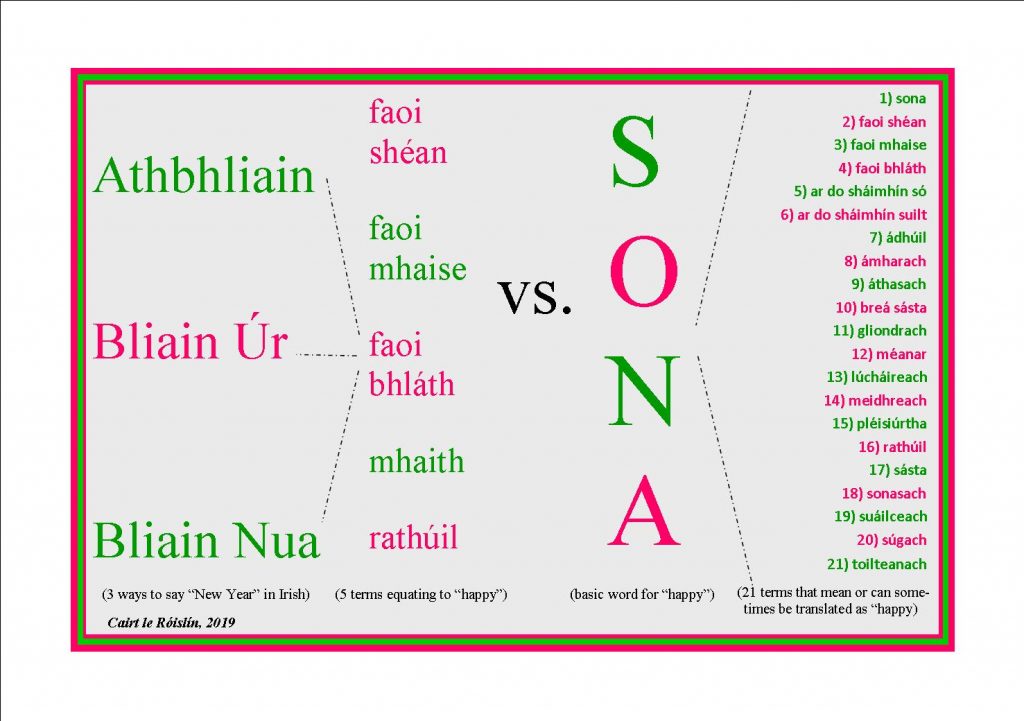 One of the most basic words for “happy” in Irish is “sona,” which sometimes appears as “shona,” as for example in the phrase “Nollaig Shona!” (Happy/Merry Christmas).  Why “shona” sometimes instead of “sona“?  We use “shona” when describing a noun that is grammatically feminine and singular, like “an Nollaig” (Christmas) or “ócáid” as in “ócáid shona” (happy/joyous occasion).   When spelled “shona,” the “s” is completely silent, btw, so the first syllable is pronounced like “hun”.  “Sona” (with the regular “s” at the beginning) is used when the nouns are masculine, like “Lá Breithe Sona” or plural, as in “Nollaigí Sona” (happy Christmases, which could be said, for example if recalling all the joyous Christmases of one’s childhood).

But … given that Irish has at least 20 ways to say “happy,” as posted in several previous blogs (naisc thíos), we shouldn’t always leap to the conclusion that “sona” automatically goes with every holiday.  So, backing up to Halloween, let’s look at some typical holiday greetings.  We’ll include the North American holiday, Thanksgiving, since so many readers here are from the US or Canada, and then we’ll continue up to An Nollaig and An Athbhliain.  At some point, I’d like to continue this with  Lá Vailintín, Lá Fhéile Pádraig, and An Cháisc, and maybe even Lá na Máithreacha and Lá na nAithreacha here, basically looking at whether we say “happy” or “the blessings of … on you,” but there isn’t  enough room today; we can continue this theme  in another blog post, though.

The following table is divided into 5 columns: the name of the holiday itself, the greeting connected to it (not necessarily the same as the basic name, as, for example, when we drop the “an” (the) from Christmas, i.e. “An Nollaig” to say “Nollaig Shona” for “Merry Christmas”.  I’ve also included the number of Google hits for the greeting as a set phrase (search in quotation marks).  Of course, the online usage of these holiday greetings could be a study unto itself, including variant forms and adding pronouns for all phrases (Nollaig Shona duit / dhuit / duitse / dhuitse / daoibh / dhaoibh / daoibhse / dhaoibhse, etc.), but I haven’t examined all of those possibilities — barraíocht do bhlagmhír amháin.   I do think it gives an interesting preliminary profile of online usage, though, for each phrase, especially when there are several choices of terminology.

For New Year’s, there largely seems to be a lot of mix and match using the words séan (good luck, prosperity), maise (adornment, state of flourishing) and bláth (blossom, bloom, prosperity, state of flourishing), and the two adjectives “maith” (good) and “rathúil” (prosperous).  As usual, the results of these searches aren’t “prescriptive” — they simply show what some people are using and saying.  But they do provide rough guidelines to what’s typical to say in the language. 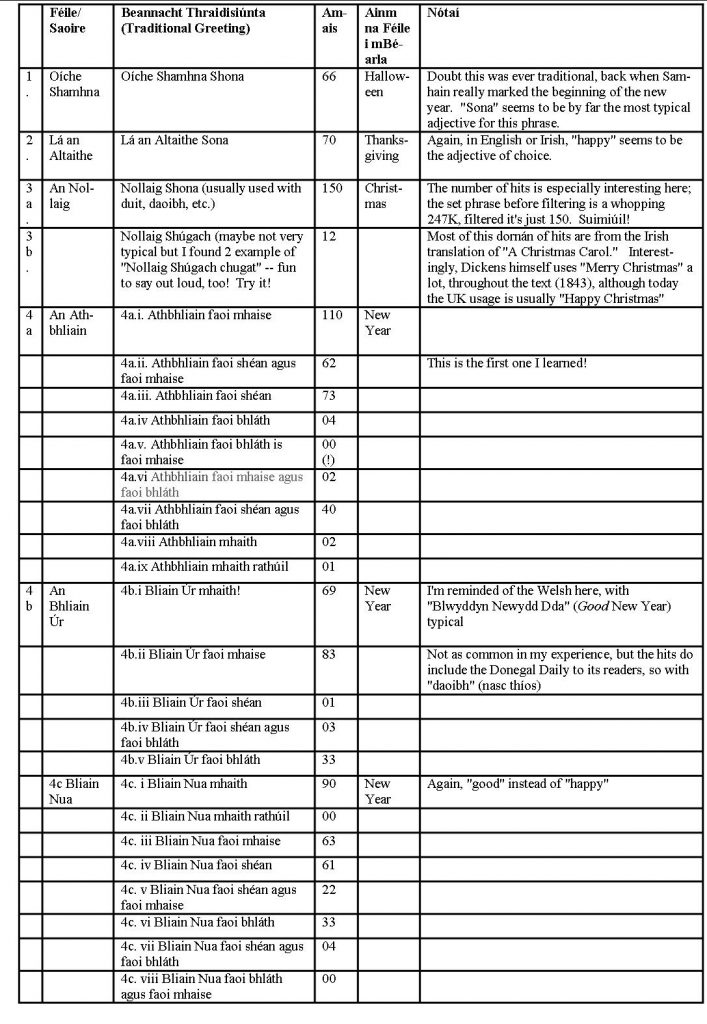 So that’s traditional 22 ways to say “Happy New Year!”, most of which seem reasonably familiar, as if I’ve heard them in some natural context.  The interesting thing about all of these traditional greeting is that they don’t use any typical word for “happy” (sona, áthasach, gliondrach, etc. — see the blog posts linked below for a longer list).  The theme seems to be more “prosperity” and “flourishing”, rather than “happiness” as such.  Hmm, no doubt a heyday of intrigue for the fealsúnaithe amongst us.

But, the plot thickens.  When I started this assemblage, I figured that combinations with terms for New Year (Athbhliain, Bliain Úr, Bliain Nua) and “happy” as such (“sona“) would be relatively scarce on the Internet.  I don’t recall, offhand, seeing a single educational resource that actually _taught_ combinations using “sona.”  But, lo and behold, look at what a quick search found.  The results are filtered but I haven’t pored through them yet to see if they seem to represent a linguistic trend, but my hunch is that they do:

2) Bliain Nua Shona (the phrase that’s most like English, literally “year-new-happy”) – 186 hits (more than any other combination).  And, and I guess I should have thought of this earlier, Google translation gives just one response for English to Irish for “Happy New Year” — this version “Bliain Nua Shona.”  Curiously, when I feed Google Translate the Welsh phrase  for “Happy New Year” (Blwyddyn Newydd Dda, lit. “Good New Year”), Google gives me “Athbhliain Shona.”  And when I feed it “Blwyddyn Newydd Hapus,” an alternate Welsh form, Google gives me just one response, back to “Bliain Nua Shona.”  Interestinger and interestinger, to fall down the same grammatical rabbit hole that Alice did.

4) Somewhat discouragingly, I got 115 hits for the grammatically incorrect phrase “Bliain Nua” followed by “Sona” (as opposed to the correct form “Shona“.  Sigh!)

5) When I tried “Athbhliain” followed by the grammatically incorrect “Sona,” reassuringly, I only got 2 hits, one with a few other minor errors (but not looking like machine-translation), and the other on a site that didn’t have much Irish but which looked very nicely done.

6) Also, reassuringly, no hits for “Bliain Úr” followed by “Sona“.

7) Discouragingly, but not really surprisingly, I got 11 hits for an Irish phrase with English word order, namely and cringe-worthily, “sona” followed by “nua” followed by “bliain.”  Sigh, again.

Update 1/1/20: And lo and behold, yet another phrase.  I’ve listed this one with the pronoun (ort, oraibh) because it comes before the actual “New Year” part of the phrase, so it’s kind of hard to leave it out:

This is often embedded in a longer phrase starting with “Guímid …” (we wish …).

Interestingly, I got just 7 hits when I tried “Rath oraibh san Athbhliain” (plural) and no hits for the singular “Rath ort …” (with no “séan“) and also no hits for  either “Séan ort san Athbhliain” (singular) or “Séan oraibh … ” (plural).  It seems that “Rath” and “Séan” mostly go hand in hand in this phrase.  Somehow I can only imagine here my friend and fellow Irish-speaker, Rath, calling out “Séééééééaaaaan.”  Oops, that was Little Joe calling out “Shaaaaaaaaane,” from the 1953 movie of the same name.  With the echo (since it’s a western), it takes about 2 seconds, and that’s pretty long for a single-syllable word.  Oh well, “séan” and “Shane” just happen to sound alike.  Never heard that memorable mionghiotáinín cainte before?  There’s a nasc thíos from the beginning of the movie’s trailer but in the actual movie, it’s the final scene.  Anyway, remember: séan = prosperity, good luck, etc. while Seán is a man’s name and “sean” (no fada) means “old.”

Conclusions: The Irish phrases for Halloween, Thanksgiving, and Christmas greetings with “sona” (mostly) parallel the English usage of “happy.”  New Year’s, though, is a horse of a different color, with many traditional versions in Irish (usually without “sona“) competing with structures closer to English.  Upshot: after all this, I still prefer the phrase I first learned, “Athbhliain faoi shéan agus faoi mhaise duit / daoibh / dhuit / dhaoibh, srl.”  Next, I’d go with any of the other more traditional phrases.  But if you go with “sona/shona,” at least remember the change from “sona” to “shona,” the pronunciation of “shona,” and, need I say it, Irish word order, which in almost all cases is noun first, then adjectives (fear mór rua, bean bheag bhídeach), much like the Romance languages and the occasional English phrase like “attorney general,” “heir apparent,” or, more tastily, “whiskey sour.”   Anyway, to all of you out there,  “Athbhliain mhaith rathúil faoi shéan agus faoi mhaise agus faoi bhláth daoibh uilig go léir, just make sure you’re not faoin mbord agus tú ólta!  Ó, agus bliain lán le Gaeilge!”  SGF — Róislín

nasc: Little Joe ag rá “Shane” https://www.youtube.com/watch?v=9vWNrFP4-AY (seconds 00:00:01 to 00:00:03 of the official trailer).  In the full movie, it’s probably in the last two minutes, just before the credits.  And if we need a Celtic connection for that, check out Archif ITV Cymru/Wales @ LlGC | ITV Cymru/Wales Archive @ NLW (https://www.youtube.com/watch?v=rFGk44P2YYM) for the extract “Shane Speaks Welsh”, discussing the Welsh dubbing of Shane, The Sin of Father Mouret, and Frankenstein Must Be Destroyed.  OK, Welsh, not Irish, but the issue still pertains.

Twenty Ways to Say ‘Happy’ in Irish and Which Ones to Use for ‘Christmas’ and ‘New Year’ Posted by róislín on Dec 25, 2017 in Irish Language