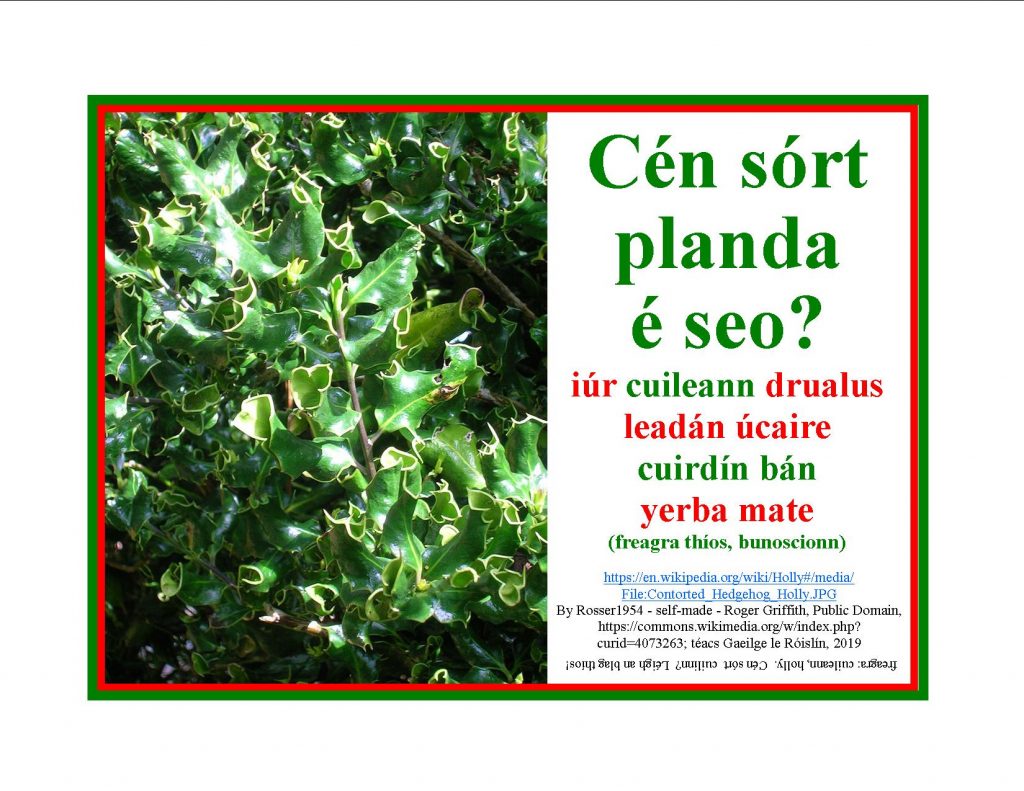 Which words should be in a dictionary and which ones should be removed after a certain period of time?  We can all probably agree that for modern English pocket dictionaries, we probably don’t need to take up space with words like “apricity” or “yelm,” although I’m delighted to find them in Landmarks, Robert MacFarlane’s treasure trove of nature words from all over Britain and Ireland (nasc thíos).  Hopefully such words find homes in voluminous works like the Oxford English Dictionary (2o volumes in print) or in local glossaries and dialect studies.  And, of course, we hope they still live on in the spoken languages of the areas Macfarlane investigates, ranging from Connemara to the Channel Islands.

As some readers here may recall, I’ve been working on the Irish equivalents for some 50 nature words that were removed from the Oxford Junior Dictionary (OJD) about 11 years ago.  The issue has attracted a lot of attention since the deletions first came to light with articles like Henry Porter’s “The pity of a child’s dictionary that junks words of imagination” in 2008 (nasc thíos).  Once the Irish list is complete, I think we’ll have some food for thought as to how this issue would play out in Irish dictionaries, be they children’s dictionaries, pocket dictionaries, standard desktop size, or the latest online enterprises.  My sense, so far, is that the removal of the equivalent nature terms from Irish dictionaries would be considered an even greater cultural evisceration than it was in the English context.  An Irish dictionary without “lark” or “clover”, both gone now from the OJD?  “Lark” symbolizing hope, welcoming the day, and immortalized in 1879 in Belfast-born Sir Samuel Ferguson’s “The Lark in the Clear Air” (nasc thíos).  Clover, which in Irish is “seamair,” which gives us that iconic Irish symbol, the “seamróg” (shamrock)?  How could we do without these?

As stated in previous blogposts, of course it’s true that the OJD has a fixed word limit (10,000) and its target audience is 7-year-olds.  And it has a mission to include words considered more relevant to modern society, which apparently include “celebrity” and “compulsory.”  But one wonders which word the seven-year-old appreciates more, “compulsory” or the also-stricken “buttercup.”  Be all that as it may, today’s blog post covers another of the deleted words, “holly,” including holly in general, the specific type of holly shown in the graphic above,  the different forms of the words in Irish, and its connection to Christmas, and will also give an overview of the other plant names mentioned in the graphic.  The next installment in this series will pick up with “kingfisher” and  “lark.”

holly, cuileann: an cuileann, an chuilinn.  Usually no plural.  As for its removal from the OJD, hmm, imagining no “holly” in England.  I guess Ralph McTell’s ode to prickliness, “Holly the Hedgehog,” would lose some of its resonance and so would  the Christmas carol “The Holly and the Ivy.”  And what we “deck our halls” with, if not “boughs of holly” — plastic “greenery,” I suppose.  And “Holly Hedgehog,” the character from Marvel UK’s 1980s environmentally-conscious comic book, Acorn Green, would have had no raison d’être.  In Ireland, where would “Bóthar Mhaigh Cuilinn” lead, without “holly” to complete the place name?  “Maigh Cuilinn” (aka Moycullen) literally means “plain of holly.”

Notice how often one of the classic name for hedgehog characters in children’s literature is “Holly”?  Lo and behold, there is a specific type of holly called “hedgehog holly.”  So that explains the popularity of that combination!  And how do you say “hedgehog holly” in Irish?  Quite straightforward, “cuileann gráinneoige” (Ilex aquifolium) from “gráinneog” (hedgehog).  That’s the plant depicted above.  The connection may be obvious, prickly leaves. prickly quills.  So how do we say that in Irish?  “Prickly” in Irish is either “deilgneach” or “colgach” and the noun form (prickliness), from “colgach,” is “colgaí.”  I can’t find an abstract noun based on “deilgneach” in any of several dictionaries I checked, although I feel it must exist.  “Deilgneach” can also mean spiky or thorny, and is typically used to describe plants (piorra, aiteal, tom, srl.).  It’s based on “dealg” (thorn), which shows up in the phrase “dealg gráinneoige” (hedgehog quill).   “Colgach” is based on “colg” (prickle, bristle, hackle, fractiousness, bad temper).  Both adjectives can be used in traditional similes about hedgehogs: chomh deilgneach le gráinneog, chomh colgach le gráinneog.  So it’s kind of interesting that while “deilgneach” and “colgach” both mean “prickly,” they tend to be used in different contexts.  But the quill itself is usually a “dealg” (not a “colg“) even though both concepts can be used in the traditional comparisons.

Why is holly associated with Christmas?  On two levels.  Because of its prickly leaves, it’s associated with the crown of thorns Jesus wore at the Crucifixion.  The red berries represent Christ’s blood.  Also, in the carol, “The Holly and the Ivy,” the holly bears a berry, “as red as any blood,” and the next line refers to the birth of Mary’s son.  Also, on a more basic level, holly with its glossy leaves and shiny berries is, frankly beautiful.  But it’s also a reminder that some things are “beautiful but don’t touch.”  The leaves must be handled with care and the berries themselves are toxic.  So, it’s a good reminder to us that some things must be enjoyed from a distance.

Finally, before we wrap up, what are the other plants referred to in the graphic above?  Each one is blog-worthy in and of itself, but they aren’t part of our main theme here.  They were just used as false answers to increase the dúshlán (challenge).

yerba mate, well, there’s no Irish for that one, it’s the South American mate plant, thrown in there just to keep everyone on their barraicíní.

So getting back to the absence of “holly” from the OJD, of course, it’s not as though removing a word from a dictionary means it’s completely gone from society.  But given the disappearing habitats for many plants and animals, it seems that nature is under attack both physically and now, linguistically.  First, it may be the hedgerow (interfering with the construction of parking lots and housing developments), then the “smeuse” (a small gap at the bottom of a hedge where small animals pass through — hmm, an bhfuil focal Gaeilge air sin?), then perhaps the small animals themselves.   And now I must double-check, are the words “hedge” and “hedgerow” still included in the OJD?  And if we have to find modern-day relevance, how many of us really stop to think about the meaning of “Heathrow,” one of the largest and busiest airports in the world?  “Heathrow” was originally a wayside hamlet, whose name referred to a row of houses along a heath.  Is “heath” still included in the dictionary, I wonder?    Hope you found this to be ábhar smaoinimh (food for thought). – SGF – Róislín

2) https://www.theguardian.com/commentisfree/2008/dec/14/books-dictionary-culture#maincontent
Books The pity of a child’s dictionary that junks words of imagination   Henry Porter

3) https://www.youtube.com/watch?v=TQJ0pCKGsBM  The Lark in the Clear Air. The story behind the song.

‘Bluebell’ or ‘Broadbrand’: Which Word Should Be in a Children’s Dictionary? — A British Example and Irish Question Posted by róislín on Aug 20, 2019 in Irish Language

Nature Words: Should They Be in a Children’s Dictionary or Not? Let’s Consider the Irish Word “dearcán” (acorn) Posted by róislín on Aug 31, 2019 in Irish Language

Nature Words: the Irish for ‘almond’ and a baker’s dozen of related terms Posted by róislín on Sep 18, 2019 in Irish Language

Nature Words in Irish, pt. 4: blackberry, budgerigar/parakeet, buttercup (and bluebell in review) Posted by róislín on Sep 30, 2019 in Irish Language

Nature Words in Irish, pt. 5: Catkin to Crocus (following up on acorn to buttercup) Posted by róislín on Oct 17, 2019 in Irish Language

Nature Words in Irish, pt. 6: Ferret to Herring (following ‘acorn’ to ‘crocus’)Posted by róislín on Oct 31, 2019 in Irish Language