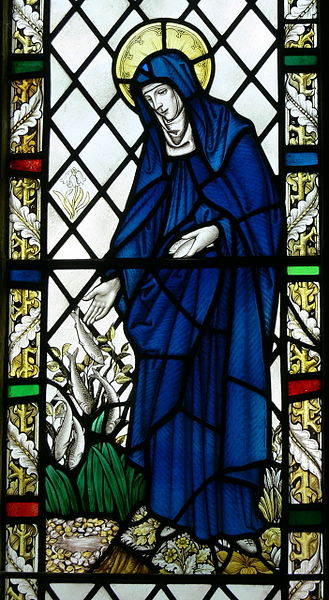 While, yes, there is at least one saint for every day of the year, February is remarkable in celebrating two saints quite prominently.  This is especially true in Ireland.

February 1st is celebrated as “Lá Fhéile Bríde” in Ireland, and to some extent, in other Celtic areas or diasporas.  Anciently, it was recognized as “Imbolc,” celebrating the lactation of the ewes and other aspects of fertility associated with the pre-Christian Celtic goddess “Brigid” (Brigantia).  Literally, the phrase “Lá Fhéile Bríde” [law AYL-yuh BRzhEEDJ-uh] means “day (of the) feast (of) Bridget.  Notice the word for “saint” (“naomh” in Irish), is not part of the phrase.  St. Bridget herself would be “Naomh Bríd.”  This point has been addressed in various previous blogs (naisc thíos).  The word for “saint” is often left out of places, organizations, or things named after saints in Irish (m. sh. Scoil Mhuire and Pota Pádraig aka Pota Phádraig, more on that i mí an Mhárta, when we celebrate Lá Fhéile Pádraig).

You may have noticed that there two different words for saints were used in the passages above: naomh and san.  Typically, “Naomh,” is used for Irish saints and “San” is used for non-Irish saints.  That’s an interesting distinction that I haven’t noticed in any other languages.  I’ve checked a bit further for Scottish Gaelic and Manx and have only found a few relevant examples, with little (possibly no) use of “San.”  Two significant examples include Naomh Anndra for St. Andrew (who was Galilean, not Scottish) and Naomh Antaine an Padua (naomh for a non-Celtic saint). I see the word “san” meaning “holy” in Scottish Gaelic, but is it used as a title?  Worth looking into further, but it seems so far that it is mostly “Naomh” in Scottish Gaelic.

At any rate, it seems that the system is reasonably clear within the languages themselves; it may just be in translation that some questions may arise.

And now, do you remember looking over some of the background saints’ names in Irish from some previous blogposts (naisc thíos, if you want a refresher).  Here’s a little matching quiz to check it out.  The answers, plus one extra are in the word bank.  Which word would you use as the saint’s title and how would you complete some of the related terms?

And here are a few we didn’t discuss in the blogs listed but which you might be able to figure out:

An focal breise?  There was one too many “San” in the “banc focal.”