Terms for Family Relationships in Irish — Gaolta Teaghlaigh Posted by róislín on Nov 16, 2016 in Irish Language 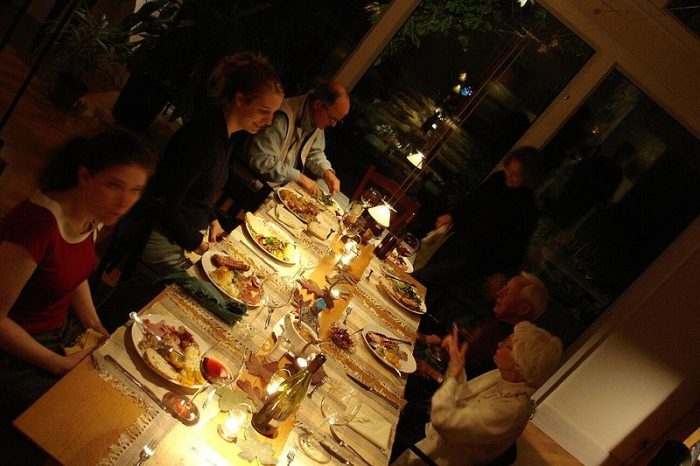 By Tom Purves from Toronto, canada [CC BY 2.0 (http://creativecommons.org/licenses/by/2.0)], via Wikimedia Commons

As we approach two major holiday seasons, Lá an Altaithe (i Meiriceá) and An Nollaig (go hidirnáisiúnta), many people will be traveling great distances to spend time with their families (a dteaghlaigh).  So let’s take break from looking at leasghaolta (steprelationships), as we’ve done in the recent blogposts, and look at the broader picture  — téarmaí gaoil go ginearálta.

So here’s  fairly comprehensive list in Irish, with the English equivalents in the word bank (an banc focal).  I haven’t tried to include all the dialect terms for grandparents, as we’ve been discussing recently, partly since the list is already pretty long and partly since, in my experience, “seanmháthair” tends to be used more than “máthair mhór” or “máthair chríonna” for formal purposes, and “mamó” is more of a nickname.  I’m also not going to try to include all the numerous variations for the same term (“máthair mo chéile” for “mo mháthair chéile,” “mac mo mhic” for “mo gharmhac,” srl.).  Additionally, I’ve left out some terms which existed traditionally but for which there is a more specific word or phrase today, for example: using “deartháir leasghaolmhar” (step-related brother) for “leathdheartháir” (half-brother) seems unnecessarily confusing to me, especially when there’s a specific term, “leathdheartháir” available and the similar-looking word “leasdeartháir” means “step-brother.”    Adding all those variations would probably make this list at least twice as long.

Since a lot of these terms may be familiar, the “banc focal” comes second in the layout of today’s post.  You might like to see how many you can complete without checking the “banc focal.”  The freagraí, as usual, are thíos. 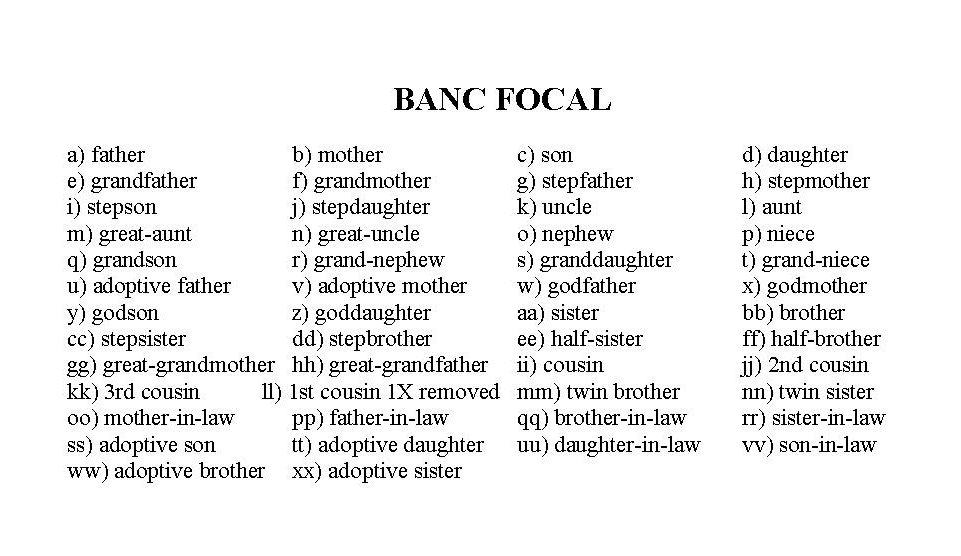 And finally, at least for Lá an Altaithe (i Meiriceá), we could list “Tom Turcaí” as our “aoi oinigh” (guest of honor).

Creating this list has also set me wondering how we would indicate our siblings if we were a triplet, a quadruplet, or a quintuplet, etc.  None of the English terms sound very familiar to me, although Googling them, I find they do exist, reasonably abundantly:  triplet sister, quadruplet brother, etc.  If we have “leathchúpla dearthár/deirféar” for “twin brother/sister” in Irish, then in theory we could have “trírín dearthár/deirféar,” for “triplet brother/sister.”  Or would we literally follow the pattern of “leathchúpla dearthár” (lit. half-of-twin brother) and have ” *triantrírín deirféar” (a third-of-triplet sister)?  Couldn’t find any answers by online searches.  Hmm, food for thought!  At any rate, we’d still be carefully using an tuiseal ginideach for the brother/sister part — that accounts for the “-ár” and “-féar” endings.  No escaping the genitive case, it seems!

P.S.  If you notice any key terms that have been overlooked, please do let me know.  I didn’t try to include every last possibility, like step-great-great-grandmother, but hopefully the modern terms for the main relationships are all included.

a) Titles, Quotes, and Sayings in Irish to Practice Terms for ‘Daoine Muinteartha’ (Family Members), Cuid/Part 1 Posted by róislín on Nov 28, 2016 in Irish Language

b) Titles, Quotes, and Sayings in Irish to Practice Terms for ‘Daoine Muinteartha’ (Family Members), Cuid/Part 2Posted by róislín on Nov 30, 2016 in Irish Language