A Letter To Babbo Natale Posted by Serena on Dec 22, 2017 in Uncategorized

When we were children, we used to write la letterina di Natale in the days running up to Christmas. We’d give our letters to mum and dad, who would (so we believed) post them on to Babbo Natale.

In our letters we’d tell Santa what good little boys and girls we’d been, how well we’d done at school, how we’d helped mum around the house, and other menzogne. We’d then just casually mention what we’d ideally like to get for Christmas.

When my brother Andrea was a bit older, and realised that Santa didn’t actually exist, he decided to cut out the middle man and send his letter directly to the source of the presents: my father’s unmarried, and very generous sister, Zia Pupina.

Earlier this year, we moved my mother into a casa famiglia, a small family run care home. Whilst we were sorting through decades of bills, letters, medical reports, and all the other clutter which my parents had accumulated, I found a letter written by Andrea to Zia Pupina in 1970. At that time we were still living in Benghazi, Libya, whilst Pupina was living in Rome with her older sister Maria, Maria’s husband Nino, and their two daughters. Here it is, with our translation into English. 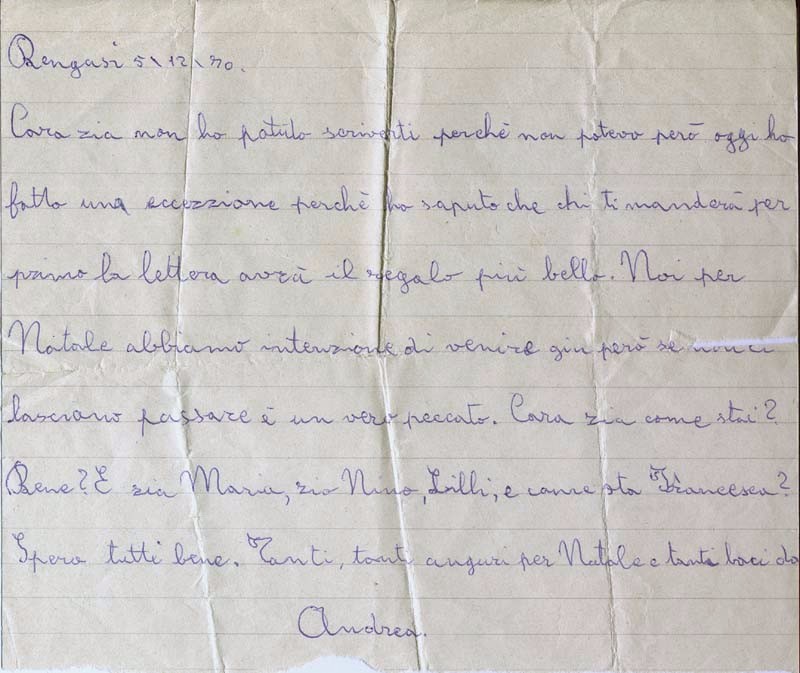 Dear aunt I couldn’t write to you because I couldn’t however today I’ve made an exception because I found out that the first one to write you a letter will get the best present. At Christmas we intend to come down (to Rome) however if they don’t let us out (of Benghazi *) it’s really a shame. Dear aunty how are you? Well? And how about aunt Maria, uncle Nino, Lilli and how is Francesca? I hope you’re all well. Very best wishes for Christmas and lots of kisses from

* This letter was written just a year after Gaddafi’s cultural revolution, and there were still a lot of political uncertainties.

Tags: Christmas in Italy, Writing a Christmas letter in Italian