On the 10th of December this year, Angela Casella, best known in Italy as ‘Mamma Coraggio’ (Mother Courage), died at the age of 65.

The story begins on the evening of the 18th of January 1988, when her eighteen year old son Cesare Casella was kidnapped in his hometown of Pavia, in the North of Italy. His kidnappers were a gang linked to the ‘ndrangheta, the Calabrese Mafia in the south of Italy, which in the Seventies and Eighties had created a ‘professional’ kidnapping industry known as Anonima Sequestri (Kidnapping Anonymous).

I sequestratori (the kidnappers) first asked for an eight billion Lira (a huge sum at that time) ransom, which, after a lot of negotiation, was reduced to one billion Lira. Cesare’s family paid the ransom in August 1988, but the kidnappers did not release the boy. After a long silence they demanded another five billion Lira. Cesare’s father wasn’t a rich man, he was a car dealer, and Angela worked as a secretary in the family business. They didn’t have that sort of money, and weren’t allowed to raise the required amount by the Italian State. Their bank account and any other assets had in fact been frozen by the authorities in order to implement the so called ‘linea dura’ (hard line) in an attempt to discourage would-be abductors by removing the profit motive.

In desperation, after long months  of silence with only sporadic contacts,  Angela Casella decided to travel down to Calabria to try and gain the solidarity of the Calabrese women, and thereby rompere il muro dell’omertà (break through the wall of the Mafia’s ‘conspiracy of silence’). In June 1989, seventeen months after her son was kidnapped, Angela toured the towns and villages of Aspromonte, a very wild region of Calabria, chaining herself in the piazze (squares) and sleeping in a tent to demonstrate to the locals the conditions in which her son had been kept for nearly a year and a half. 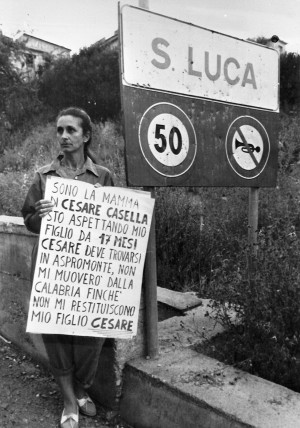 The images of this desperate mother shown on television and in newspapers shocked the whole country, and Angela eventually became known as Mamma Coraggio (Mother Courage). Her actions also succeeded in putting pressure on the Italian Police and Government, who felt constrained to send the Army to help with the search. The negative outcome of Angela’s campaign was that the Anonima Sequestri declared that they could not release Cesare without some further ransom because it would mean loosing face to a woman! 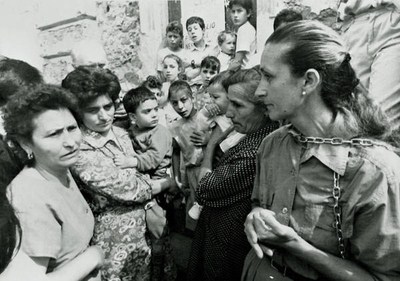 In December 1989 the Police trapped and arrested one of the kidnappers when he went to collect the new ransom of half a billion Lira. Finally, on the 30th of January 1990, 743 days after he was kidnapped, Cesare was released because his kidnappers felt that the police were now hot on their trail and they could no longer hide him. However, apart from the kidnapper caught at the ransom drop none of the rest of the band were ever found.