Whilst mad dogs and Englishmen are out in the midday sun, we’re heading for the mountains. Specifically, to Lago Santo, a beautiful mountain lake at 1,507 metres above sea level in the Parco Nazionale dell’Appennino Tosco-Emiliano.

In part 1 I described the debilitating heat of August and gave examples of some of the vocabulary that we use when talking about it. But for now, basta caldo! Come with us up into the mountains alla ricerca della freschezza (lit: in search of freshness).

The journey begins from our home in Valdantena, at 500m slm (slm = sul livello del mare – above sea level). In linea d’aria (as the crow flies) Lago Santo is probably only about 6 km (3.7 miles) from us. The crow would also need to climb just over 1000 metres (1km) to get there, as the lake lies at 1,507m slm. By car, however, it’ll take us around 50 minutes to arrive at our ‘base camp’, Lagdei, from whence we proceed on foot for another hour to il lago. I hope you don’t suffer from car sickness, because the road is long and winding with some precipitous drops and roller coaster gradients.

After a short while we pass Pracchiola, famous for the refreshing and beneficial water which spouts endlessly and abundantly from la fontana del paese (the village fountain). People come from miles around to fill their bottles and damigiane (demijohns) with its crystal goodness. Pracchiola is the last village before il passo.
We continue to follow the ever winding strada provincial SP42 as it climbs through forests of castagni (sweet chestnuts) which give way to faggi (beech trees) as we gain altitude. The thermometer in the car drops down to 26°C, troppo bello!

Now the forest thins out, tough mountain grass, low shrubs and clumps of weirdly twisted trees attest to the harshness of the climate up here at over 1,000m slm. At 1,250m we cross il Passo del Cirone, which marks the border between Toscana and Emilia-Romagna. Now we descend along an ever more broken road (cazzo, abbiamo quasi perso le ruote in quel buco!) before the final steep climb onto una strada sterrata (an unpaved road) flanked by huge sentinel pines.

Calculating the sun’s trajectory, we leave the car in a shady spot, don our scarponi (boots … hope you brought them with you) and head up the trail which will take us to il sentiero panoramico (the panoramic footpath). We’ve chosen this not for its panoramic qualities (qui, i panorami non mancano! – there are no lack of panoramas here!) but rather because it has a less steep gradient than the alternative. However, if you really don’t have mountain legs, you can always cheat and hop on the seggiovia (chairlift), we won’t tell anyone! 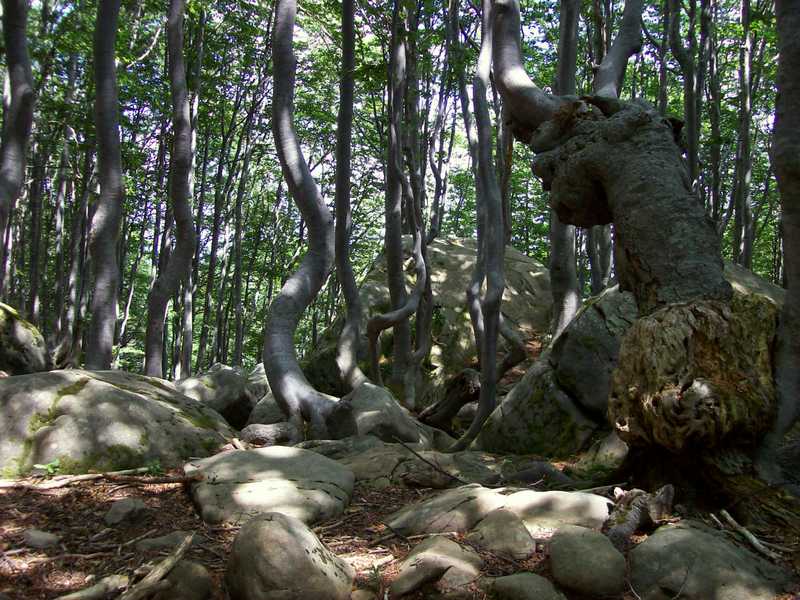 ‘the improbable sculptures of wind twisted beeches’ Photo by Geoff

To be honest, neither of us have proper mountain legs. I grew up in Suffolk, England, highest point 136m! And Serena grew up surrounded by the Libyan desert … avete capito! So, if we can manage the 257m (843 ft) climb between Lagdei and Lago Santo so can you! One big advantage here for us flat-landers is the wonderfully limpid quality of the air, scented, as it is, with the aroma of pine and mountain herbs, it’s like an invigorating and rejuvenating elixir after that stuffy stuff giù a valle (down in the valley).

The footpath is deceptively easy for the first 20 minutes or so, then it starts to get serious. Apart from the gradient, it’s ever more frequently littered with loose rocks and protruding roots. Eventually, we appear to be traversing an immense rockfall. I’m breathless, but as I have to constantly watch where I put my feet I don’t understand why I’m having such a hard time moving forward. Am I really such a wimp? Then I pause to catch my breath, and look back. Below me I see Serena labouring up what I now recognise to be the 45° slope that I’ve just struggled up. Ecco perché!

Now the trail is gentle again. On either side, massive boulders the size of large cars are interspersed with the improbable sculptures of wind twisted beeches. We feel like Hansel and Gretel wandering through an enchanted wood. Elves and gnomes, frozen into the gnarled distorted trunks, peer out at us curiously. A giant hides within a boulder, his features made visible by the play of sunlight and shadow on the ancient surface. We speak in low voices, reluctant to violate this mesmerizing sanctuary. 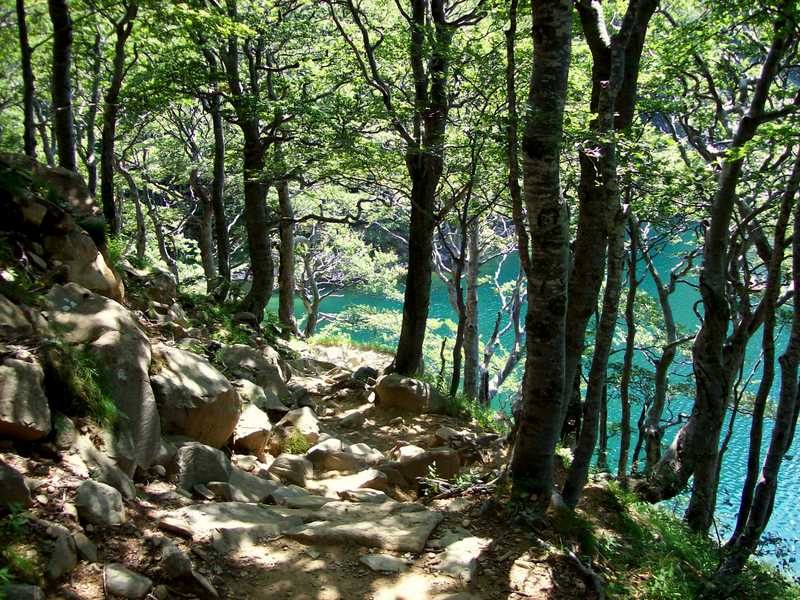 E finalmente ecco il lago (And finally, here’s the lake), Lago Santo, a patch of glittering verdigris, anomalously flat in this jutting, angular landscape. It brings a sense of order to the cluttered chaos. We find a convenient rock upon which to rest beside the shore.
We’re tantalised. The ‘Holy Lake’ is a mantra. It draws you in and fills you with dreams, with calm, and a sense of  benessere (well being). It’s both an entity unto itself, and an illusion. We try to make sense of it, but it hides its face behind a mirror mask, showing us its own upside down version of sky and mountains.

E poi, ecco la freschezza che cercavamo! (And then, here’s that freshness that we were searching for!). It’s around 23-24°C, the air is pure, untainted, and for the first time in quite a while I realise that I can breath absolutely freely. I feel incredibly alive, and it becomes apparent just how much the humid heat has been oppressing me.

We don’t want to leave, but menacing thunderclouds are welling up to the north and seem to be headed our way. And this is no place to be when all that pent up energy, generated by days of searing heat, unleashes its fury upon the mountains. Best leave now and enjoy the walk down whilst there’s still time. 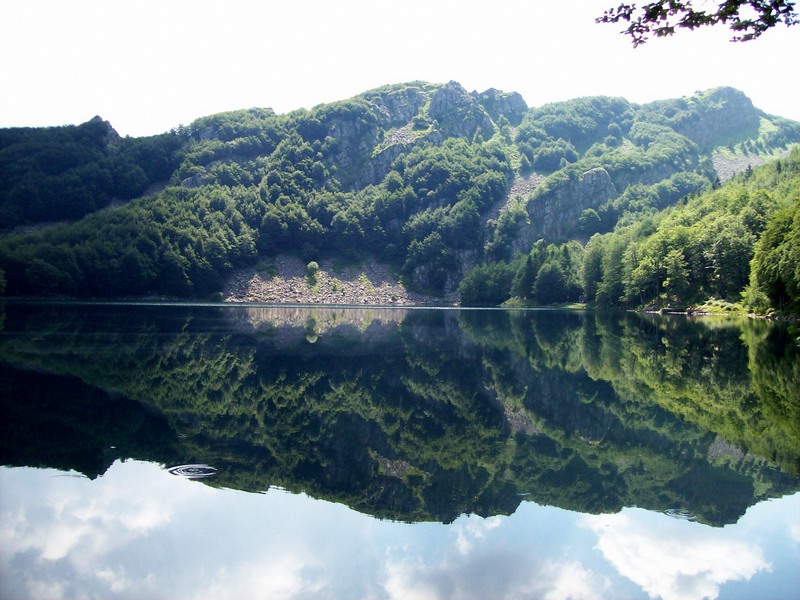 ‘… its own upside down version of sky and mountains’. Photo by Geoff

We reach the car and decide that we have time to get a caffè in the bar at il Rifugio Lagdei. 10 minutes later: Hmm, that’s better, ci voleva proprio! (just what we needed!)
And now it’s time to dash, because a vast black wall with a grey curtain at its base is moving rapidly up the valley from la pianura (the plain) below. It resembles a mobile waterfall and if it continues its present speed and trajectory we’ll soon be engulfed. But with a bit of luck, and skilful driving, we may just get home before it.

The avanguardia (avant-guard), in the form of large solitary raindrops, begins to hit the windscreen as we pass Pracchiola, dai, dacci ancora qualche minuto ché arriviamo a casa! (come on, gives us a few more minutes so that we can get home!) we implore the storm which now snaps at our tails.
And our wish is granted, we make it home safe and dry.
E non solo, for the storm brings with it a stream of deliciously cool air, loaded with the scent of wet mountain flora, as if to say, here, you left this behind so I brought it down for you.

And, leaving doors and window wide open, we drive out all the stuffiness from our little house in beautiful Valdantena.