Let’s begin 2011 with a brief look at an aspect of Italy that few tourists ever see: L’Italia di Sotto (Underground Italy).

Visiting the modern industrial city of Milan you would never guess that a century ago it was not unlike Venezia: a city of canals! In order to make the most of every available bit of space above ground Milan’s network of waterways was gradually covered over and built upon. But if you explore the world below ground will discover more than 200 kilometers of canals and rivers. Milan also has a network of passaggi segreti (secret passages) which were partially designed by Leonardo da Vinci. These consist of una rete (a network) of military tunnels which were originally connected to the central stronghold of the time: Il Castello Sforzesco (Sforzesco Castle).

The city of Bologna also has its underground counterpart: the remains of the ancient Roman city which rose up on the banks of the torrente Aposa (River Aposa). This waterway was once lined with mills and navigated by ships bound for il Mare Adriatico (the Adriatic Sea). One of the most fascinating sites in Bologna sotterranea (underground Bologna) is la Conserva di Valgrande, which was designed to collect and filter the water supply for la Fontana del Nettuno (Neptune’s Fountain) and la Fontana Vecchia (the Old Fountain) in the city centre.

Have you ever asked yourself what people did before the invention of the fridge? Well a visit to underground Turin will reveal l’antenato del frigorifero (the forerunner of the refrigerator), la ghiacciaia, which is an underground structure designed to conserve snow and food. Several of these can be found beneath the area of il mercato ortofrutticolo (the fruit and vegetable market).

Beneath Trieste lie le gallerie ‘Kleine Berlin’ (the galleries of ‘Piccola Berlino’, or ‘Little Berlin’), a vast network of tunnels and bunkers which were constructed during World War Two for the German troops as protection against the allied bombardments. http://www.sconfini.eu/Itinerari/una-piccola-berlino-sotto-casa.html 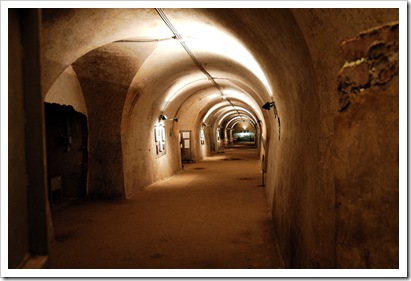 In Our Next Post we will visit Secret Places in the Centre and South of Italy.