Let’s continue our visit to underground Italy. In our last post we visited some Hidden Places in the North of Italy. Today we are going to visit the centre and the south of Italy.

Several years ago, Geoff and I spent a couple of weeks exploring Umbria, and as we are very interested in the Etruscan culture we decided to pay a visit to the Museo Archeologico di Chiusi to see if it was possible to visit some of the Etruscan tombs in the area. One of the museum guides kindly took us in his car to an archeological zone just outside the town, where we were invited to descend into one of the innumerable ipogei (underground chambers) that have been unearthed in the area. Beneath the ground, even on a baking hot day in August, the air remains cool and fresh. The tomb, some 2500 years old, was simple, lacking the spectacular frescoes that we had hoped to see, but none the less impressive. The tomb was cruciform in plan, and sculpted from the beautiful golden colored local rock with low stone benches running along several wall, on which were placed urne cinerarie (burial urns) and sarcofagi (sarcophaguses). See this link for more information:   http://www.prolocochiusi.it/visitare.aspx

Napoli is a city with two faces, the everyday world of ‘above ground’, and the hidden sotterraneo (subterranean) world which lies beneath. Under the surface of this unique city lies a world of cripte, cunicoli, pozzi, acquedotti, e enormi cavità (crypts, passages, wells, aqueducts, and enormous caverns). The construction of Napoli di sotto (underground Naples) began with the ancient Greeks, who quarried the tufo (tufa rock) in order to build the città di sopra (city above ground). These ancient quarries were gradually interconnected by cunicoli and transformed into cisterne (cisterns), cimiteri (cemeteries), and, during WWII, rifugi antiaerei (air raid shelters).

The UNESCO World Heritage town of Matera is famous for its case grotta (grotto houses). In fact a large portion of Matera has been excavated from the roccia viva (bedrock) to create the typical abitazioni (dwellings) used by la popolazione contadina Materana (the peasant population of Matera). One such dwelling, la casa grotta del Casalnuovo, inhabited up until 1958, has been meticulously restored with its original furnishings and utensils to preserve it as it was when occupied by the family who last lived there. http://www.casagrottamatera.com/

The Comune di Mottola in Puglia is home to some of the most beautiful chiese rupestri (underground churches) in Italy. Since prehistoric times the walls of gullies and ravines have been excavated to form habitations and places of worship. La cripta di San Nicola, with its lovely Byzantine style affreschi (frescoes), is a notable example. 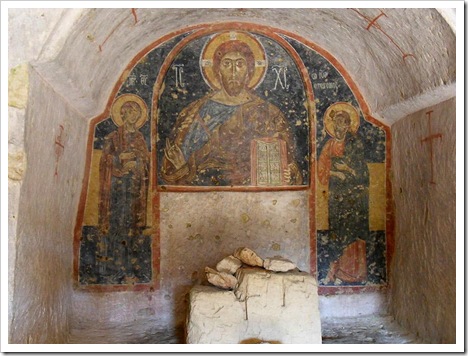 La Gravina di Petruscio, also located near Mottola, is a spectacular canyon whose walls are pockmarked by more than 100  excavations consisting of dwellings, store rooms, and animal shelters, interconnected by stairways and galleries. These dwellings were inhabited from prehistoric times up until the middle ages when the population moved to the more easily defended hilltop towns. http://www.comune.mottola.ta.it

Palermo, in Sicilia, also has its hidden underground secrets: the world of the qanat. Qanat derives from the Arabic term Kanat, used to describe the underground channels which they created to irrigate the land and supply fresh water to the city of Bal’harm (Palermo). Under the Arabs, Palermo became the capital city of Sicily, expanding to become one of the largest European cities of the 10th century. The need for fresh water in an arid landscape was obviously of vital importance, and the qanats carried water from springs down into channels deep under the city. Despite all the radical transmutations that have altered Bal’harm beyond recognition some of these ancient qanats still carry fresh water today, as they have for centuries.