In The Hall Of The Mountain King Posted by Geoff on May 25, 2017 in Uncategorized

What, you may ask, has a piece of music by Norwegian composer Edvard Grieg got to do with the Italian landscape? Let me explain …

When I was a child, music was always present somewhere in the background. My mother loved romantic classical music, and had a gramophone collection of popular pieces. Some of those pieces became amalgamated into a kind of ‘soundtrack’ for my young imagination, conjuring up vivid images of exotic landscapes and mythical creatures.

In particular, there was the fantastical Peer Gynt suite by Edvard Grieg. This music took me to places that I’d never visited in ‘real life’, rugged fairytale landscapes that were far from the gentle farmlands of Suffolk, England, were I grew up.

Many years have past, I’ve explored all kinds of music and lived in landscapes dramatically different from that which I knew as a child. But it was only a few days ago that I discovered the real world counterpart of a place that I’d visited in my imagination whilst listening to Grieg as a child. Monzone Alto lies enclosed within the dramatic jagged landscape of le Alpi Apuane, and it was here that the words ‘In The Hall Of The Mountain King’ came back to me. This, of course, is the title of a percussive foot-stomping piece from Grieg’s Peer Gynt suite. And just in case you don’t know it, or have perhaps forgotten it, here it is:

Serena and I had travelled to Ponte di Monzone to visit the romantic Villa Giannetti, which villa is normally closed to the public but had been opened for guided tours as part an annual event called Dimore Aperte (See last year’s article: The Hidden Italian Garden). Villa Giannetti, built back in the late 1600’s, was lived in up until about 10 years ago. 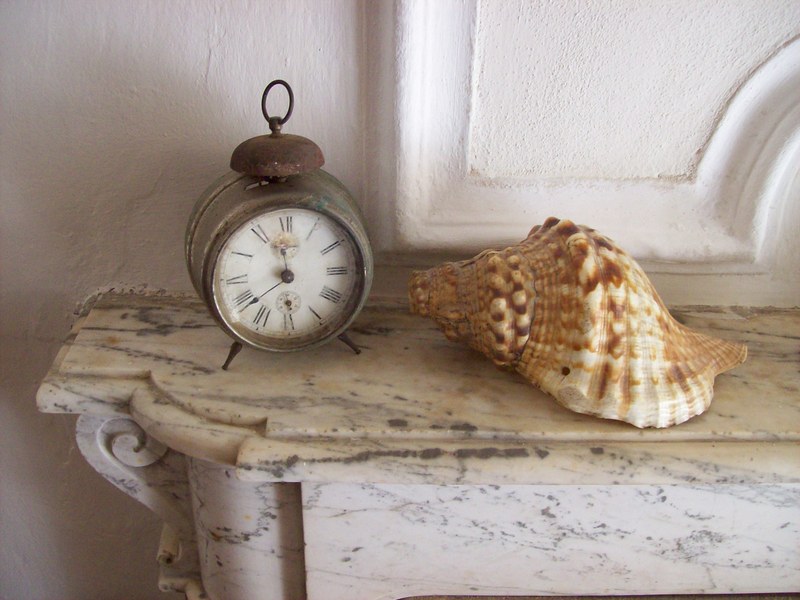 Detail from a room in Villa Giannetti. Photo by Geoff

Now, I’m not usually one for guided tours full of dates and fiddly facts and figures which I instantly forget. What I love when I visit these places is to tap into the atmosphere, even if it’s mostly conjured up by my imagination, because that’s what brings a location alive for me. And Villa Giannetti certainly had plenty of atmosphere to tap into, having been left more of less in the state that it was in when it was last lived in.

The villa was lovely, but it was the backdrop against which it was set that magically transported me back to my childhood dreams in the land of Grieg. And so, our tour of the villa over, we decided to set off towards the enticing ‘Hall of the Mountain King’, as I now thought of it, just a short hike away. 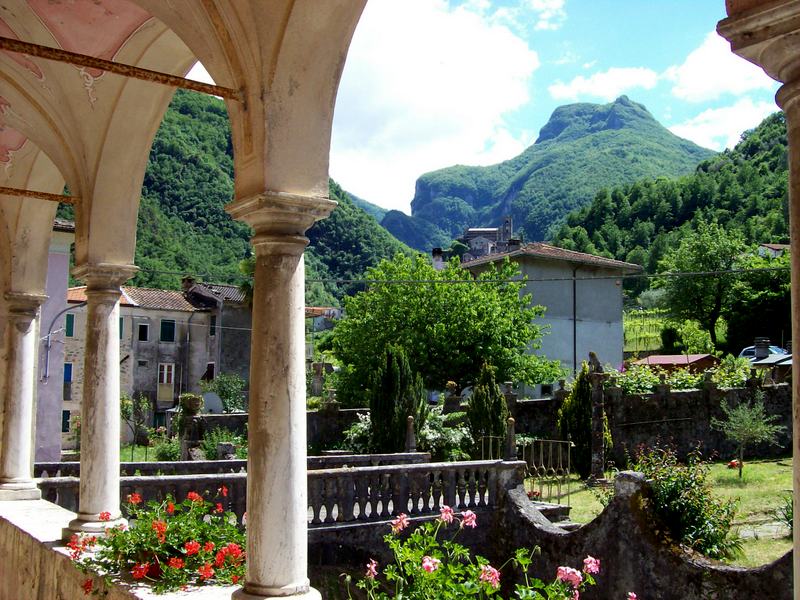 Monzone Alto is dominated by La Chiesa di San Prospero, which is built upon the roccia viva (bedrock) of a high jutting spur that leans slightly away from the main body of the village. And it’s a good thing that the village is founded upon solid rock as it was right here, if fact, that an earthquake of 5.2 magnitude struck in June of 2013.

La chiesa, which was badly damaged, is now in the final stages of its post earthquake restoration. Half way up the steps which lead to San Prospero we had the good fortune to meet a very hospitable chap who happened to have the church keys in his pocket and spontaneously offered to show us around. We entered the dark, scaffolding filled interior. Narrow dust speckled rays of sunlight filtered through here and there creating an eerie spectre of the interlacing metal framework. Using the light of his cell phone our companion proudly pointed out the most precious relics, and indicated where the worst of the damage had occurred. Was this the actual Mountain King’s famous hall? 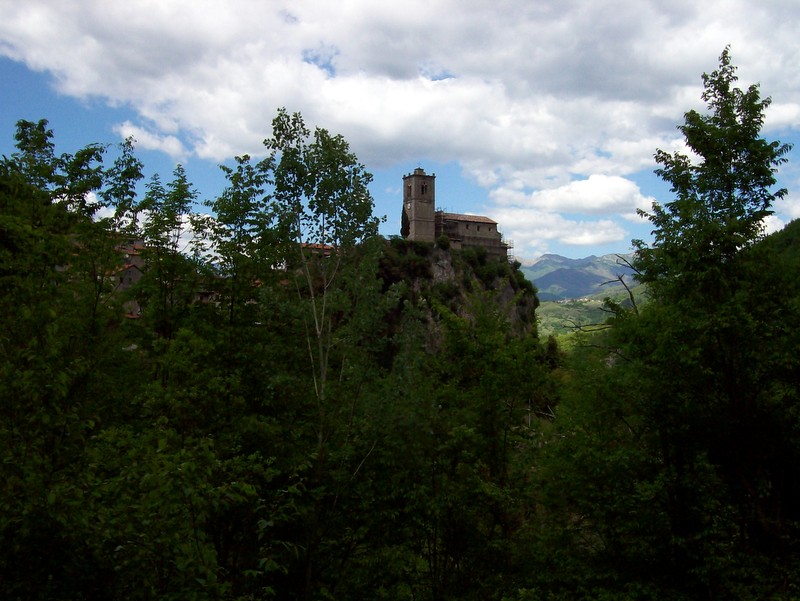 When re-emerged from the gloom into blinding sunlight the tour continued, as our self appointed guide indicated the magnificent 360° panorama. He pointed out all the important landmarks, villages, peaks and valleys, and threw in a bit of local history to boot.

Well, dear readers, I hope this little tale has whetted your appetites and perhaps inspired you to set forth and discover these amazing hidden corners of Lunigiana for yourselves. Sadly depopulated, and without funds, many villages such as Monzone are gradually falling into disrepair. The young have moved away to find work and enjoy the convenience of town life, the old are gradually dwindling away. These places need you! 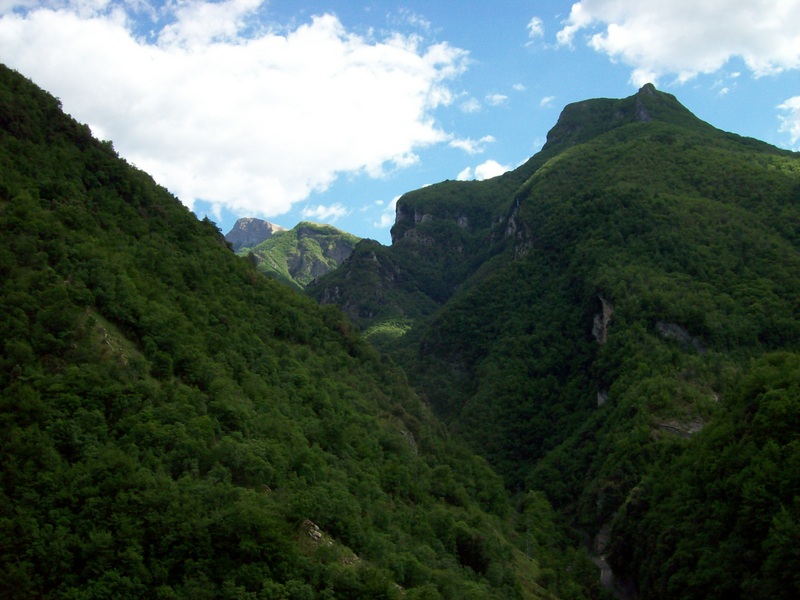 The Realm of the Mountain King. View from la Chiesa di San Prospero. Photo by Geoff.

What’s more my friends, locations such as this are perfect for students of Italian, because unlike the over exploited tourist attractions (Torre di Pisa, I’m looking at you), you won’t be bombarded by Italians who want to speak to you in English (or sell you horrid ‘Made in China’ knick knacks) … when all you want to do is practice your damn Italian! Yes, in these special hidden places your Italian will definitely be put to the test.