The Olympic Games are over, now it’s time to have a little rest and to count our results. In total we brought home 28 medals: 8 gold, 9 silver, and 11 bronze. Nothing compared to the USA or China (we’re only a little country!), but enough to give us a dignified 8th place in the word ranking, one place better than we achieved in the Beijing Games: “Siamo nel G8!” (We are in the G8!) was the triumphant announcement of Gianni Petrucci, president of the Italian Olympics Committee.

Our outstanding results in la Scherma (fencing), and in particular il Fioretto (Foil), have given us a real sense of pride. Our success began on the 28th of July, when il Dream Team Azzurro, as the female foil team is called, won all the medals for the Fioretto individuale femminile (Women’s Individual Foil): the gold medal went to Elisa Di Francisca, silver to Arianna Errigo, and bronze to Beijing Olympic Champion Valentina Vezzali.

On the 2nd of August il Dream Team Azzurro completed its magnificent performance by winning the gold medal in the Fioretto a squadre femminile (Women’s Team Foil) thanks to the great work of Elisa Di Francisca, Arianna Errigo, Ilaria Salvatori, and Valentina Vezzali. 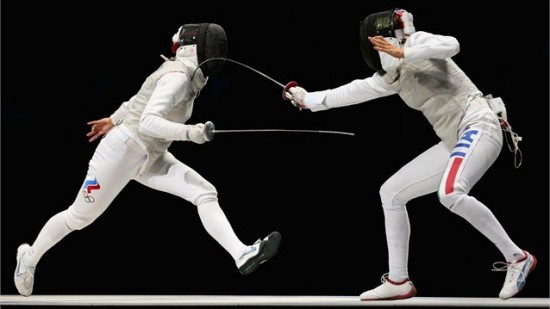 Valentina Vezzali, the 38 years old Italian flag bearer at the inauguration of the games, had really been hoping for the gold medal at this, her 4th, Olympic Games. It would have made her the first woman in any sport to be a solo champion in four successive Olympics, but it was not to be. However, with a total of 6 gold medals, 1 silver and 2 bronzes in her Olympic career, she is the Italian female athlete with the most Olympic medals. Moreover, if we add the medals won in the World Championships, she reaches a grand total of 19 gold medals, equalling former fencer Edoardo Mangiarotti as the Italian athlete with the most numbers of gold medals. Valentina is determined to participate in the 2016 Olympic Games.

On the 5th of August the success of the women’s team was duplicated in il fioretto a squadre maschile (Men’s Team Foil) where the gold medal was won by a team consisting of  Valerio Aspromonte, Giorgio Avola, Andrea Baldini, and Andrea Cassarà: for the first time in its Olympic history Italy has managed to win the gold medal with both its male and female teams.

The other Italian medals for fencing went to Diego Occhiuzzi in the Sciabola individuale maschile (Men’s Individual Sabre) who won the silver, and the Sciabola a squadre uomini (Men’s Team Sabre), consisting of Aldo Montano, Diego Occhiuzzi, Luigi Samele, and Luigi Tarantino who took the bronze.