A few days ago we were out walking in the nearby woods when we saw a man and his young daughter carrying baskets and searching through the undergrowth. Our first thoughts were: “What on earth are they looking for at this time of year?

It’s too late for chestnuts or wild mushrooms”. Then Geoff noticed that the little girl’s basket was filled with muschio (moss) and felci (ferns) and we immediately knew that they were collecting materials to construct their Presepe or Presepio (Nativity scene), an old Italian Christmas tradition which is still very popular.

At this time of year you will find a Presepe in almost every home and shops will sell you all the basic bits and pieces that you need, such as la stalla (the stable), Maria e Giuseppe (Mary and Joseph), i tre Re Magi (the three Wise Men) and of course Gesù Bambino (Baby Jesus). Many people then extend the basic nativity by creating a landscape around it, and this is where the moss, ferns, twigs, and stones come in handy to make little trees, fields, and rivers. 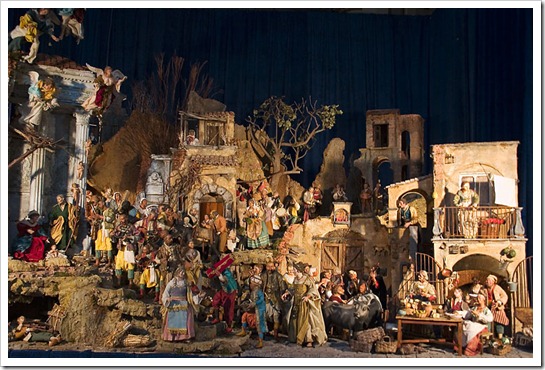 The custom of recreating la Natività (the story of the Birth of Jesus) was started by San Francesco d’Assisi (Saint Francis of Assisi) on Christmas eve 1223 in Greccio, a village near Assisi in Umbria. San Francesco organized a scenic representation of the birth of Gesù (Jesus), and this was the beginning of a tradition which was soon adopted and spread by the Franciscan Monks throughout Italy and in the rest of Europe.

The first specially carved presepe was created by the Tuscan sculptor Arnolfo di Cambio around 1290. Since then artists have continued to model figurines from wood and terracotta which are arranged in front of a background painted with a view of a landscape. It is very common to find quite elaborate presepi exhibited in churches during il periodo natalizio (the Christmas period). Although the art of the presepe originated in Toscana, it quickly spread to il Regno di Napoli (the Kingdom of Naples) through the influence of King Carlo III di Borbone where, in the 17th and 18th centuries, Neapolitan artists began to give the biblical representation of Christmas a more contemporary aspect by locating the Nativity in a typical landscape from the Campania region and thus recreating glimpses of everyday life from that period. The artists of Liguria, Roma, Puglia and Sicilia have also had an important stylistic influence on the development of this fascinating art form.

There are two interesting variations on the basic Nativity theme: il Presepe vivente (the living Nativity) in which real people and animals play the parts of the characters in the Christmas story. These presepi viventi  are often arranged along the streets of little villages and towns, with life size shacks and stables built out of wood, straw, palm leaves, and so on. The most authentic ones will even have a real baby playing the role of Gesù. The other important variation is il Presepe mobile or meccanico (the moving or mechanical Nativity). There is a wonderful example of a presepe mobile in Mignegno, near Pontremoli, and it almost completely fills a small chapel of about 15 square meters. We went to visit it yesterday with some German friends who are here for Christmas, and having found an old lady who knew the man who might have the keys etc. etc. we finally gained admittance. The man who did eventually have the keys showed us into the cold dark chapel and pressed a button on the wall.

Suddenly the whole presepe came to life. Beginning its mechanical cycle with a representation of night time, the moon slowly made its way across a starry sky then sunk behind the plaster of Paris hills as darkness gave way to the gradual break of dawn. A pair of tin angels rose up to heaven on their wires, and about 50 or so wooden and papier maché figures, each about 15 cm high, came to life one by one. The scene with which we were presented was a fairly authentic representation of everyday life in a Lunigiana village of about 100 years ago, and probably had far more to do with local folklore than biblical history. In fact the actual Nativity only took up a tiny corner of the vast landscape, it seems that over the 30 years or so that the locals have been building this incredibly work of art they have got rather carried away!

The Presepe of Mignegno is only open for a few days of the year, and throughout the rest of the year the ‘artists’ are tinkering away at their creation, continually adding to, and refining it. Present amongst the population of the miniature landscape are: i falegnami (the carpenters), il maniscalco (the blacksmith), i boscaioli (the lumberjacks), il fornaio (the baker), il contadino che falcia il fieno (the peasant who cuts the hay with his scythe), un uomo che pressa l’uva con il torchio (a man who is pressing grapes in a winepress), la lavandaia al lavatoio pubblico (the washerwoman at the public laundry – a flat stone by the fontana), e così via (and so on).

I have heard about, but not yet visited, an interesting museum in the Bergamo region which is said to contain many wonderful examples of presepi. If you are interested you can find out more here: http://www.museodelpresepio.com/