On the 19th of March the Catholic Church commemorates San Giuseppe (Saint Joseph), the father of  Jesus on earth, and therefore on this day we also celebrate La Festa del Papà (Father’s day). This festival wouldn’t be complete without the traditional zeppole or frittelle di San Giuseppe, a type of sweet fritter or doughnut, which are found in all Italian regions with diverse variations. Legend has it that during his time in Egypt Saint Joseph made a living by selling frittelle,  from which comes his nickname which is commonly used in Rome: San Giuseppe frittellaro.

In the south of Italy, especially Napoli, these fritters are called zeppole, and consist of small nests of fried choux pastry with an egg custard filling in the centre, and decorated on top with un’amarena sciroppata (a black cherry in syrup). Here in Toscana, on the other hand, they are called frittelle, and are made with cooked rice. This is the recipe traditionally used in Lucca: 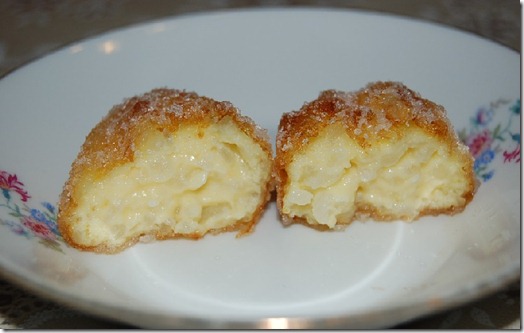 It’s best to start the preparation the evening before by putting the milk, water and salt in a saucepan, and heating it up. When it starts boiling add the rice and leave to cook, stirring from time to time. Turn off the heat and add the sugar, mixing well.

The morning after, add the eggs, orange rind, vanilla, and liqueur, and mix well with a wooden spoon. Add a few tablespoons of flour and stir well  for a long time. The mixture is ready when the wooden spoon can stand up by itself. Add the baking powder and mix again.

Put plenty of oil for deep frying in a frying pan. When the oil is hot drop in a few spoonful of rice mixture at a time. When le frittelle (the fritters) are nice and golden, scoop them out and put them to drain on some kitchen paper, then roll them in some sugar. Serve warm.