Maria Montessori Posted by Serena on Mar 9, 2011 in Culture

Yesterday, the 8th of March, was Giornata Internazionale della Donna (International Women’s Day), and this year I’ve decided to write an article about a famous Italian woman, whose work has had a huge impact in the field of education throughout the world.

Maria Montessori was born in 1870 in Chiaravalle near Ancona (Marche). She was a very determined young woman who decided to become an engineer, but at that time such a career wasn’t open to women, so she changed direction and studied Medicine and Psychiatry instead. Montessori graduated in 1896 from the Università La Sapienza di Roma, becoming the first Italian female doctor! Whilst working in the psychiatric hospital of Santa Maria della Pietà she was horrified to find that the children were treated in the same way as the adults. She perceived that children have different stages of development, and that in order to successfully educate them it was necessary to adapt one’s teaching style to their abilities and knowledge. Furthermore, she recognized that in order to be able to memorize children must experience things first hand, and they must be interested in what they are taught. This theory seems obvious to us today, but at the time it was absolutely revolutionary!

In 1896 the Italian Minister of Education heard Maria Montessori giving a lecture at the Educational Congress in Torino about the training of the disabled. He was very impressed by her ideas and invited her to put them into practice as the director of the Scuola Ortofrenica, an institution for the care and education of the mentally retarded. Her theories were further tested when some of her eight-year-old “unteachable” children were entered for national school exams. Not only did they all passed, but their results were above average. At this point Maria Montessori realized that if her technique was successful with special needs children, it would be even more so with “normal” children, so in 1907 the first Montessori school, called Casa dei Bambini (Children’s home), was opened in one of the poorest neighborhoods of Roma. The success of this school created a worldwide interest in the Montessori’s method, and further schools were opened in Italy and abroad. In fact my aunt Vittorina attended a Montessori Nursing School in Pesaro when she was a child in the early 30’s.

But Fascism arrived to put a stop to Montessori’s success. She was exiled by Mussolini due to the fact that her beliefs and practices weren’t in accordance with his requirement, i.e. to train children to become good soldiers. She first went to Spain, then when the Spanish Civil War broke out, moved on to Holland. In 1939 she was invited by the Indian Theosophical Society to give a lecture in India. She promptly accepted, remaining in India until the end of WWII. After the war, and following a brief stay in Italy, Maria Montessori moved once again to Holland, where she died in 1952. Her legacy lives on today, not just in the thousands of Montessori schools worldwide, but in the general impact it has had on the way parents and educators view children’s learning. If you want to find out more about the International Montessori Association, here is a link to the official site: http://www.montessori-ami.org/

Caso mai! (By the way!) If any of you travelled to Italy in the 90’s, you may well have seen Maria Montessori’s portrait printed on the good old 1,000 Lira banknote, which in those days would buy you a caffé! 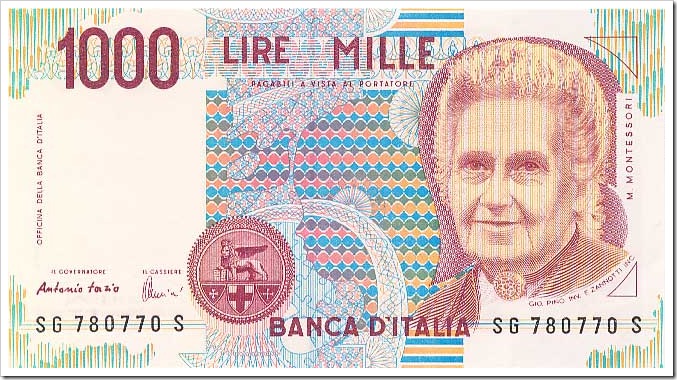