Michelangelo’s Secret Room Posted by Serena on Mar 4, 2015 in Uncategorized

Last week I recounted an anecdote about my visit to the Vatican Museums and how I ended up running away from the Sistine Chapel. However, as I said at the end of it, “l’anno dopo ebbi la mia rivincita con Michelangelo!” (the following year I got my payback on Michelangelo!) Here’s how:

The summer following my agoraphobic experience at the Sistine Chapel, freshly graduated in Egyptology, I was offered a part time job as a cataloguer at the Archaeological Museum in Florence. I would finish work at two o’clock in the afternoon and after a brief lunch on the beautiful steps of the nearby Spedale degli Innocenti I would spend a couple of hours wandering around Firenze visiting museums before catching the train back home. I always carried with me a letter from the director of the Archaeological Museum saying that I worked for them, and with that I had free access to all the museums and churches of the city.

One afternoon I decided to go and visit le Cappelle Medicee, famous for the monumental tombs of Lorenzo il Magnifico and Giuliano dei Medici designed by Michelangelo. I had my faithful old guide book  with me which told me: “… dalla porta di fronte all’entrata si accede (a richiesta) ad una stanza sulle cui pareti, di recente, sono stati scoperti e restaurati 56 disegni di figure umane di notevoli dimensioni, quasi tutti attribuiti a Michelangelo” (from the door opposite the entrance you can access (on request) a room, on the walls of which have recently been discovered and restored 56 large drawings of human figures. Almost all of them have been attributed to Michelangelo). 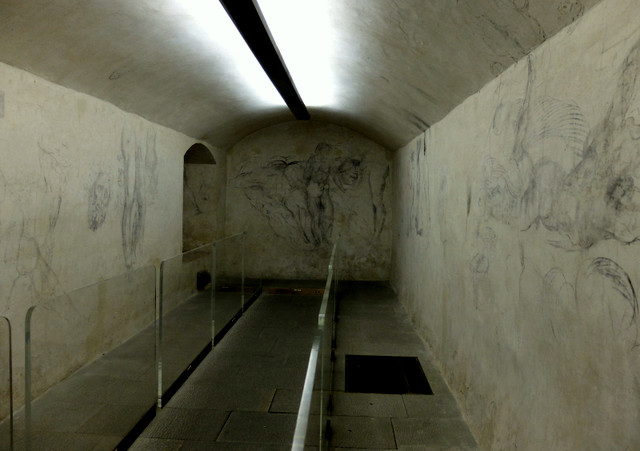 I entered the Cappelle Medicee and began to look around for Michelangelo’s room, but couldn’t locate it. Then I noticed a couple of foreign tourists talking to a hesitant custodian, pointing at the wall of the chapel and then to something in their guide book. I joined them and, with my sweetest smile, swiftly unfurled my ‘magic letter’ from the Archaeological Museum. At this point the custodian capitulated and, looking around furtively, said: “Wait a couple of minutes until all the other visitors have gone and I’ll let you in”.

And so it was that, when the coast was clear, he opened a secret door cut into the wall, and led the three of us into a small vaulted corridor just 7 meters by 2. My jaw dropped … the walls were covered in the most wonderful drawings sketched out in charcoal. I was completely overwhelmed by this incredible experience: there I was, almost on my own, just an arm’s length away from Michelangelo’s drawings! I clenched my hands together in an effort not to reach out and caress the sketches. 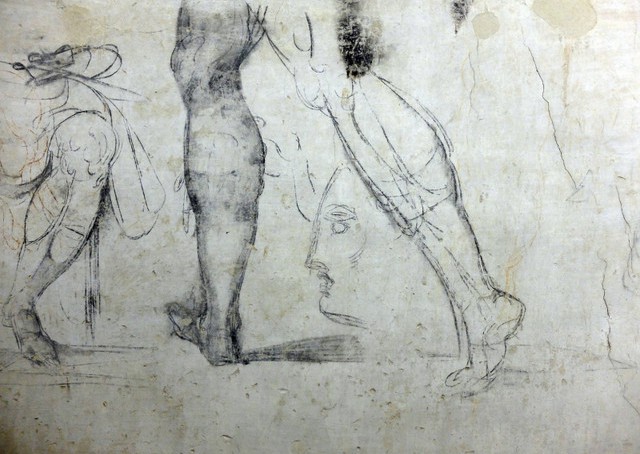 The custodian informed us that, apparently, during la Congiura de’ Pazzi (an attempted coup against the Medici in 1530) Michelangelo hid in this room for three months, and with nothing else to do, the Maestro kept himself busy by filling the blank walls with sketches. These lovely creations were later covered over with a white stucco, probably by Michelangelo himself in the attempt to erase any traces of his hideout. And there they remain, hidden and forgotten until they were rediscovered only in 1975. 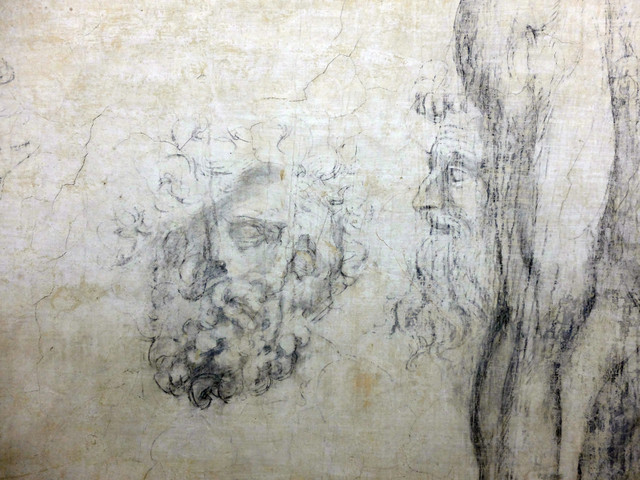 I never realised how privileged I had been to be able to see these sketches in person until a few days ago. Out of curiosity, I was surfing the net trying to find out more about Michelangelo’s secret room. Initially, it was so difficult to find any information that Geoff began to kid me that I’d dreamt it all, and that the ‘secret room’ was just a fantasy. Eventually I discovered the reason for the room’s apparent disappearance: at present it is sealed off to the public due to its fragility, and it can only be experienced as a virtual tour. How boring is that!

Am I and the two unknown tourists the only people to have ever visited Michelangelo’s secret room? Perhaps you, dear reader, have seen it … or perhaps you have been lucky enough to have discovered some other secret jewel in Italy? Please share.