UNESCO heritage status for espresso Posted by Bridgette on Feb 3, 2022 in Culture

Today I learned that Italy is seeking UNESCO heritage status for their espresso, which will actually be their second attempt. Last year UNESCO denied their application because two separate entities (the Consortium for the Protection of Traditional Italian Espresso Coffee and the region of Campania) both applied seeking that espresso be considered an “Intangible Heritage of Humanity.”

This year they have joined forces to submit one application for the benefit of the whole country, and espresso may just become an official symbol of Italian heritage. This will follow the art of the Neapolitan “Pizzaiuolo” – Pizza Maker which was added to the UN agency’s list in 2017. Sicilian puppet theater – Opera dei Pupi, truffle hunting, and the Mediterranean diet also don the list for Italy.

Of course, espresso is already well integrated in the daily lives of Italians, even without the “official status.” According to the Italian Espresso Institute, founded in 1998 with the specific goal of safeguarding and promoting the original espresso, more than 90% of Italians drink a cup of it each day.

“In Italy, coffee is much more than a simple drink: it is a real ritual, it is an integral part of our national identity and is an expression of our social relationships that distinguishes us around the world”. 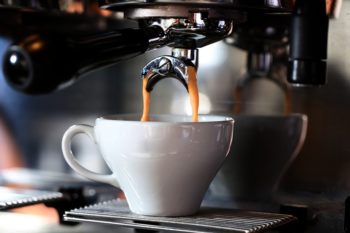 In Italy you may have noticed that there are two words for the English word “cafe” – il bar” and “il caffè. At these places you’ll find coffee beverages, but often also alcoholic beverages, pastries, sandwiches, as well as other small things to sgranocchiare, munch on.

You will also note that Italians don’t take coffee “da portare via” – “to go”, but rather they spend their time savoring their small cups of coffee. They will either sit at a table and chiacchierare  (chat) slowly with friends, simply sit alone, or they may decide to take their coffee standing at al banco (the bar) before they are on their way.

Let’s take a look at some different coffee beverages in Italy and the differences between them:

Espresso — This is just normal coffee in Italy! If you want to order an espresso, simply say: “un caffè, per favore.”

*Latte macchiato — steamed milk “marked” with a splash of espresso

Caffè macchiato — espresso “marked” with a splash of frothy milk

Caffè con panna — Coffee with a dollop of whipped cream

*(Italians don’t order these drinks after 11 a.m – they only enjoy milky coffee in the morning.)