Gyeongbokgung Palace (경복궁) Posted by sasha on Jan 21, 2015 in Uncategorized

One of the main tourist attractions in Seoul is Gyeongbokgung (경복궁), the former royal palace of the Kingdom of Joseon (조선). This great kingdom lasted from 1392 to 1897, with the palace being built early on in 1395 by King Taejo. Of the Five Grand Palaces built in Seoul during the Joseon period, this is the largest of them all. The name means “Palace Greatly Blessed by Heaven,” as it was built in an auspicious location between two mountains. Thanks to its location, it is also commonly referred to as the “Northern Palace.” It served as the residence of the Joseon kings and seat of the government, and at its peak consisted of over 300 buildings with upwards of 3,000 staff. 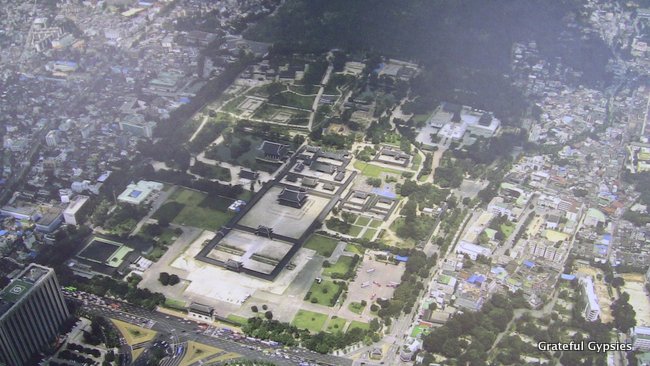 While the palace looks to be in pretty good shape these days, it has had a turbulent history to say the least. Burned to the ground in 1592 during a Japanese invasion, it lay in ruins for almost 300 years. Restoration began in 1865 by Heungseon Daewongun (흥선대원군), regent and father of King Gojong. It was a grand and expensive project that ended up bankrupting the government, but it sure looked nice. 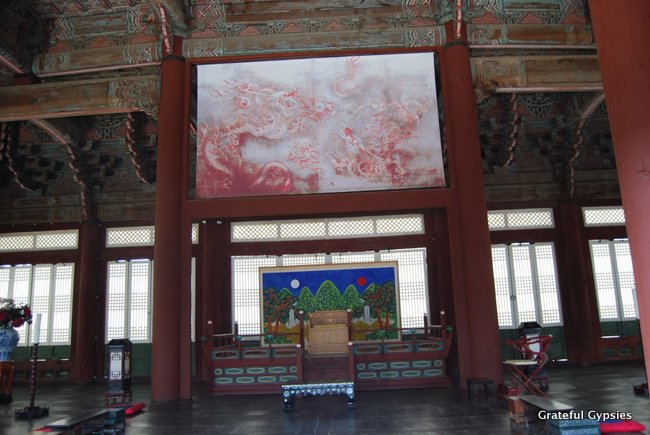 It was good to be king… well, for a while at least.

The good times wouldn’t last in the palace, as the Japanese would return in the late 1800s. They stormed the palace on October 8, 1895, assassinated Queen Min, and burned her body. After this tragedy, the king and his father moved from the palace to the Russian legation. With the Japan-Korea Treaty of 1910 (한일병합조약), Japanese colonial rule officially began in Korea. The next year, ownership of Gyeongbokgung and the land it was on was transferred to the Japanese Governor-General, who would soon have most of the buildings torn down. In its place, the Governor-General had a much less attractive office building put up. 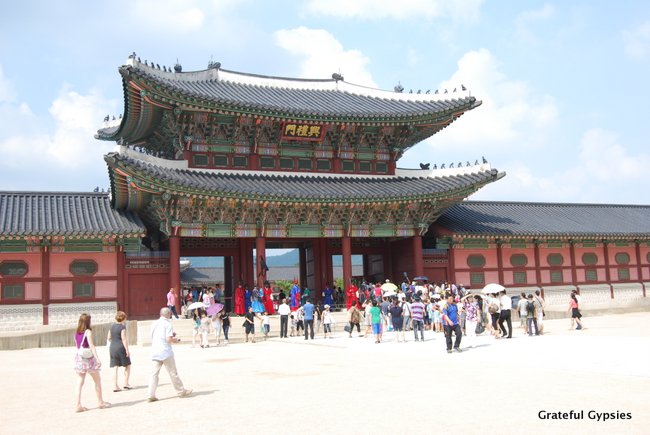 Much of the palace has been restored, but there’s still work to be done.

In 1990, restoration efforts began once again on this former Korean royal palace. The hideous Governor-General’s building was finally torn down in 1996, and work is ongoing to get this historical sight completely fixed up. Although the restoration project is far from finished, Gyeongbokgung is well worth a visit and should be at the very top of your Seoul to-do list. Upon your arrival at the palace, you may just feel like you’ve stepped back in time as you see guards in Joseon era uniforms perform a changing of the guard ceremony. Just don’t be surprised if the guards don’t take too kindly to you posing for goofy pictures alongside them… 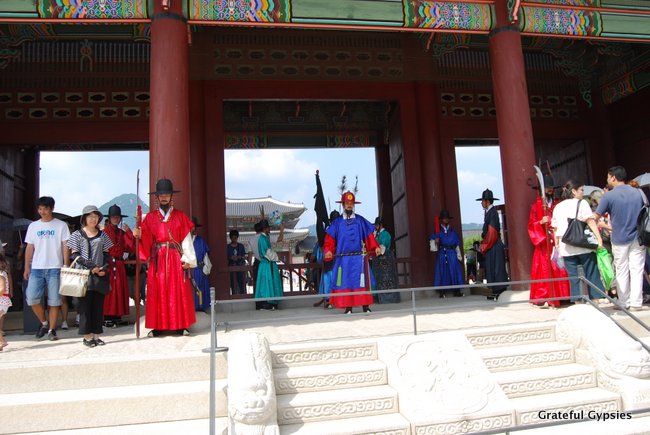 Standing guard at the palace. 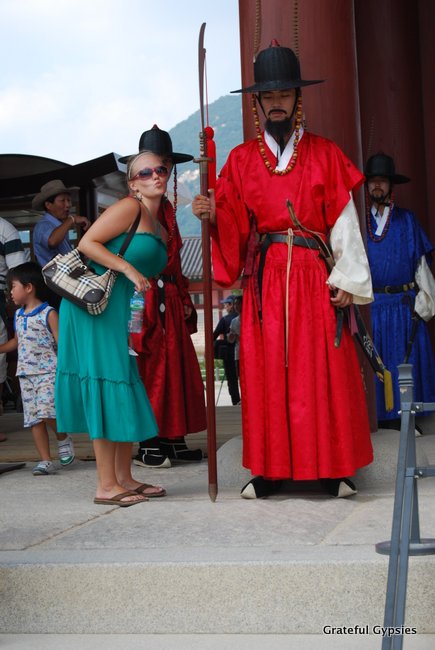 The guard is not amused.

In addition to strolling through the grounds and taking in the restored gates, pavilions, and other structures, you can also visit the National Folk Museum and National Palace Museum. With thousands of artifacts on display and excellent descriptions, it’s worth it to dedicate a nice chunk of your day to fully take in the museums. 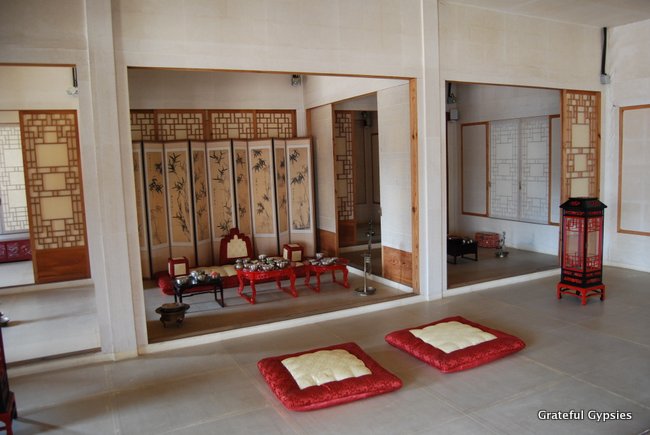 See what life was once like in the palace.

While you’re free to explore the palace on your own, it’s advised that you pick up the audio commentary or join the free guided tour (11am, 1:30pm, and 3:30pm) to learn more about this important piece of Korean culture and history. For starters, here are pictures and brief descriptions of a few of the more important parts: 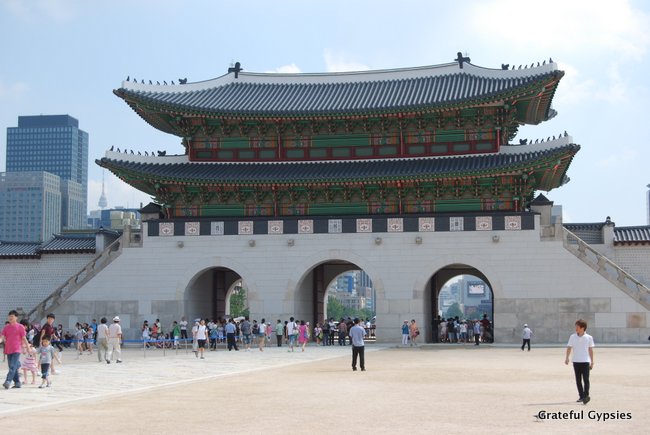 This is the main and largest gate of the palace and it remains an important symbol and landmark in Seoul. The name can be literally translated as “may the light of enlightenment blanket the world,” showing the dedication of the Joseon in establishing a new dynasty. Destroyed twice by the Japanese, restoration on the gate was finally finished in 2010. 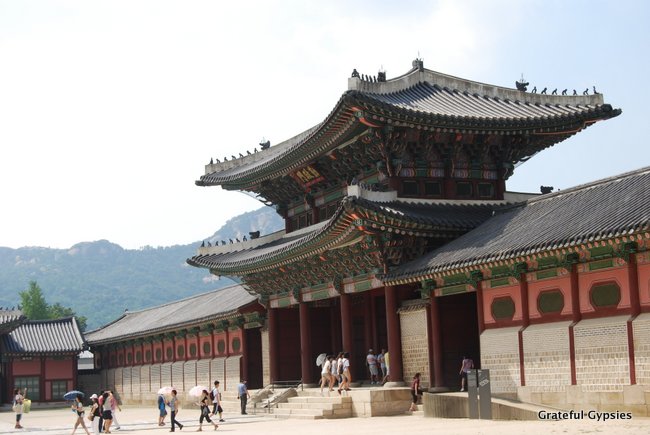 This part of the palace, whose name means “diligence helps governance,” was the Throne Hall. Here, the king gave declarations of national importance and greeted foreign envoys, amongst other things. 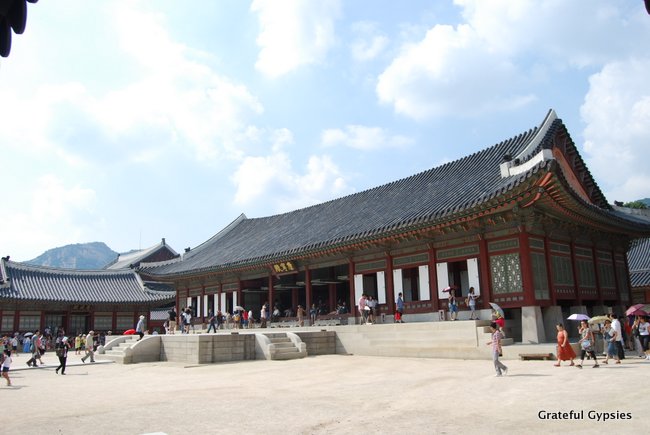 This building served as the king’s main living quarters, containing his bed chamber. It has been destroyed and rebuilt many times throughout history, with the most recent restoration coming in 1994. 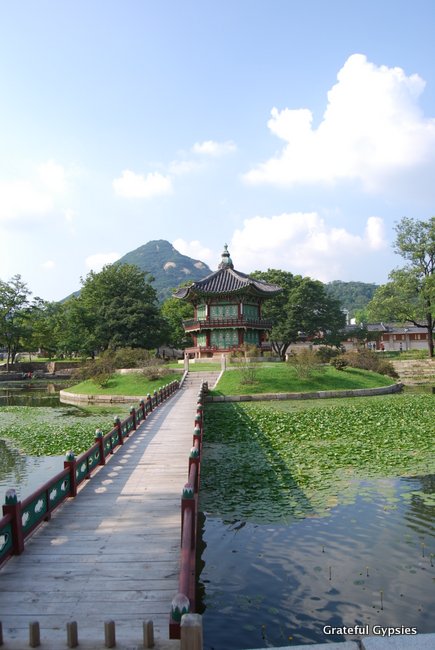 A nice pavilion in the palace.

King Gojong had this two-story pavilion built on an artificial island in the small lake, with a bridge connecting it to the palace grounds.

For those who can’t make it all the way to Seoul to explore this grand palace in person, here are a few more shots: 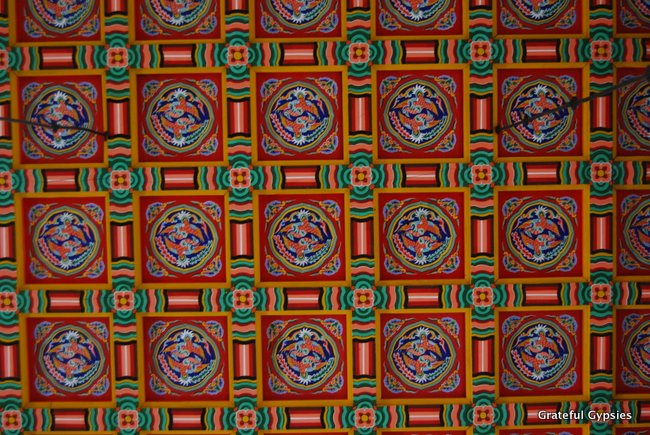 Intricate artwork on the ceiling in one of the halls. 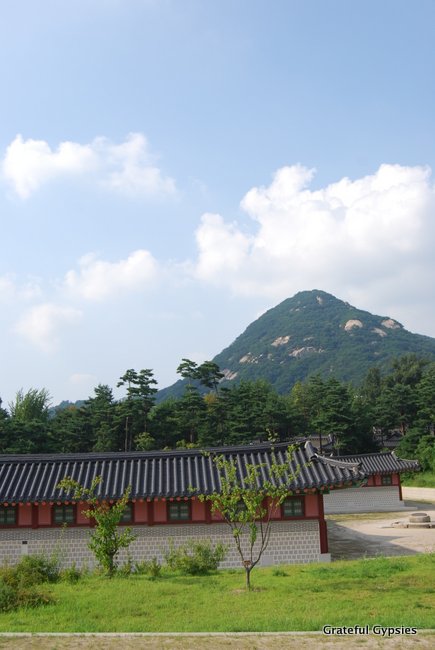 Mountain views in the distance. 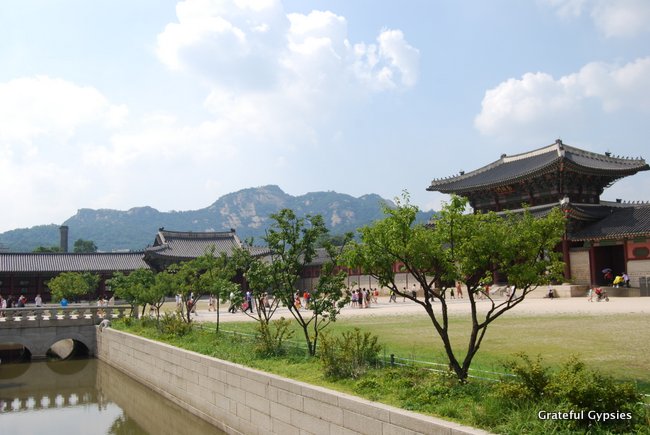 A great place to spend an afternoon. 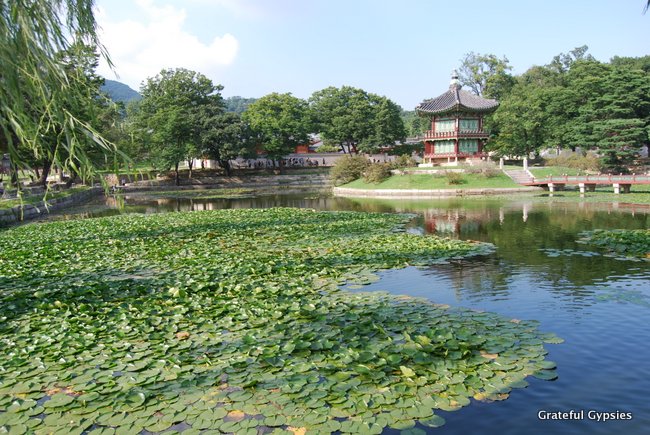 Another look at the pavilion from a different angle. 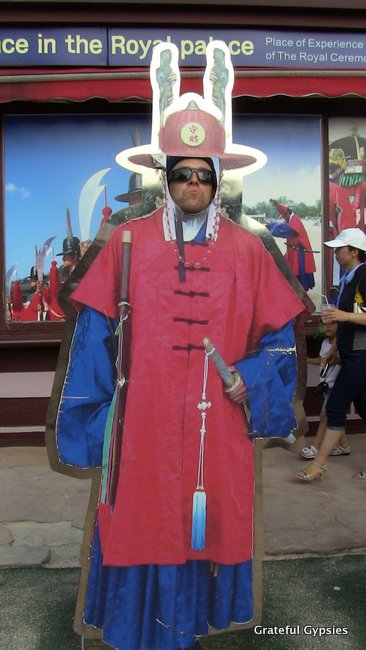 Gotta fit in one silly picture.