It has been over a decade since I left Korea. I try to keep up with Korean culture by being closely connected with Korean media. I enjoy watching talk shows or real-life tv shows because they teach me the raw reality of Korean culture. One of the reality shows I enjoy watching is 나혼자산다 (I Live Alone). This show features celebrities who live alone. It portrays their daily life over a long period of time. Considering celebrities as 일반인 (il-bahn-in: ordinary people) could be hyperbole, but this show definitely shines a light on disparate elements of Korean culture, particularly in 결혼 문화 (gyeol-hon-moom-hwa: marriage/ wedding culture).

The rate of marriage has been constantly decreasing in Korea. Younger generations have different ideas of 결혼 (gyeol-hon: marriage/wedding). If people once considered marriage as an inevitable milestone in life, young Koreans are hesitant to accept the idea. They measure every ounce of physical, financial, and emotional burden as a married person and compare that with their unlimited freedom as a single person.

Today, I would like to talk about the fast-evolving marriage culture in Korea. 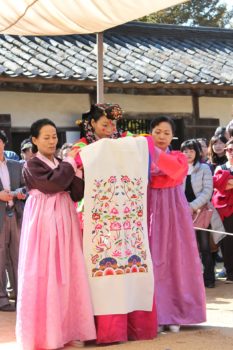 Image by Vitamin on Pixabay

There is no doubt that a wedding is a big festive occasion universally, but also it could be an expensive event. When my brother-in-law got married, I was able to see the similarities and the differences between American and Korean wedding cultures.

For both cultures, planning a wedding is always exhausting. Most of all, it makes your wallet very thin in a short time. The truth is that many Koreans avoid getting married due to 결혼 비용 (gyeol-hon-bi-yong: marriage expenses). In 2019, average wedding expenses were about 2억 3186 만원 (231,860,000 won), which is equivalent to $195,766 as of December 2021. This is including housing expenses because about 73% of your wedding expenses will go straight into obtaining housing. The rest will be spent on the actual wedding events, which I think is a lot of money to spend for one day. Do you still want to get married? 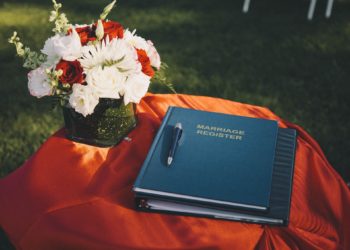 Image by briannad26 on Pixabay

In western culture, a wedding gift registry is common. In Korean wedding culture, 축의금 (chook-eui-geum: money gift for happy occasions) exists. Some people, of course, do give 선물 (sun-mool: a gift), but presenting 축의금 at a wedding is the norm.

If you are invited to a Korean wedding, you would not miss a small desk in front of a wedding ceremony site. It is a custom that every guest gives away white envelopes that have money in them at the desk. Then, a person at the desk will ask your name and write the amount of 축의금 on a record book. The married couple will eventually see the records and you would likely get the same amount of 축의금 on your wedding day. There is a customary guideline of 축의금depending upon how close you are to the couple.

There are wedding gifts between a bride and a groom’s family. 혼수 (hon-su: gifts to a bride’s family from a groom) is supposed to be wedding gifts from the groom’s side and 예물 (yea-mool: wedding gifts to a groom’s family from a bride) is from the bride’s.  In the past, 혼수 and 예물were given to represent love and gratitude. However, 혼수 has been sometimes mistakenly measured as 현금 (hyeon-geum:  cash) for some people. It is sad, but true that the quantity of 혼수 sometimes causes family feuds and becomes a deal-breaker between soon-to-be-married couples.

One of the most outstanding differences that I noticed was wedding cultural elements, such as bridesmaids and groomsmen, even flower girls/boys. These extra guests in a wedding do not exist in traditional Korean weddings, but many young Korean couples have adopted the ideas in their weddings.

As far as I understand, there is 총각파티 (chong-gak-party: bachelor party) culture in Korea, but no bridal shower. The closest concept of a bridal shower I can relate to Korean wedding culture is 돌잔치 (dol-jan-chi: the first birthday party), which is geared towards celebrating a baby’s health. However, modern Koreans do celebrate 처녀파티 (cheo-nyeo-party: bachelorette party) and a bridal shower. 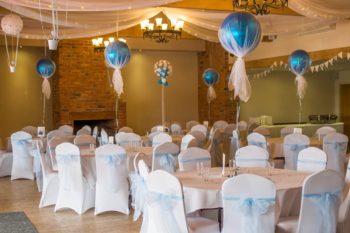 Choosing a wedding venue can be a headache.  I have seen a variety of wedding venues with different themes in western wedding cultures.  In Korea, 웨딩홀 (wedding hall: a building particularly designed for a wedding event and a reception party) might save you from a headache.

웨딩홀 is an all-for-one type of place for an indoor wedding ceremony. 웨딩홀 is a specifically designed building that is for the wedding ceremony, including 피로연 (pi-roh-yeon: a wedding reception). Therefore, it is not uncommon for Koreans to get married at 웨딩홀. However, the downside of this place is over-standardization. In fact, a nickname of this building is 공장형 웨딩홀 (gong-jang-hyung-wedding hall), which is translated as a factory-style wedding hall. You are not the only bride in this building because a dozen or more couples are getting married at the same time in the same building but just in a different room. You also have limited time to finish your wedding events because the next couple is waiting for your room!

Young Koreans are getting more creative with their wedding styles. Some prefer an outdoor wedding, others have a small wedding, instead of inviting hundreds of guests whom you have never met before. In fact, the idea of having a small wedding with family and friends has been popular after some Korean celebrity couples chose that method.

What did you think about Korean wedding culture? I will talk about fast-changing Korean cultures with different topics in the next posts. Stay tuned!